This area (abbreviated to NCA) covers 8,300 km2, including 260 km2 for the crater itself (the largest caldera in the world still intact), and 890 km2 of forest. The Ngorongoro Conservation Area is the compulsory gateway from Arusha to its neighbour the Serengeti National Park (transit tax payable), with which it shares nearly 80 km of border.

Geology. While the first ancient granitic mountain range formed 500 million years ago (north of the conservation area), the highlands and volcanoes formed during the same fracturing process that created the Rift Valley (the Great Escarpment) 15-20 million years ago. The area, which therefore includes this crater at an altitude of 2 000 metres, is then divided into high plateaus in the east, with reliefs (rocky peaks, smaller craters, gorges) also at very high altitudes, and 'low' plains in the west in the extension of the Serengeti, at an altitude of about 1 300 metres. The variation in altitude is great, from 1,230 m to 3,648 m (Mount Lolmalasin, the 3rd highest in Ethiopia behind Kilimanjaro and Meru). In addition to the Ngorongoro Crater, the Empakaai Crater and the Ol Doinyo Lengai volcano on the eastern side of Lake Natron, the Olduvai Gorge (considered to be one of the cradles of mankind because hominids lived there 3 million years ago) and the shores of Lake Eyasi are also part of the NCA.

History. The name Ngorongoro comes from the name of the warriors of the tribe once settled in the crater, the Likorongoros (name deformed by the German settlers in Ngorongoro). The Maasai, a warrior and conqueror people, drove out the Likorongoro (also called Datoga), a tribe also of Nilotic origin like the Maasai, who eventually migrated to Lake Eyasi. The Maasai now call them the Mangatis, or "the respected enemies". Two German farmer brothers lived in the crater until the beginning of World War I. In fact, the researchers are still using one of their old farms. Tourism began in the 1930s when Ngorongoro Crater Lodge was built.
Created in 1951, the Serengeti extended far beyond its present border, and excluded the Maasai from the pastures of the Great Plains. A conflict broke out in 1956 between the national parks and the Maasai. The Ngorongoro Conservation Area was then founded in 1959, both as a nature reserve to protect exceptional fauna, as a conservatory for the Olduvai Gorge, where the Leakey couple had just discovered the skull of Australopithecus zinjanthropus, and as a land of welcome and protection for the Maasai hunted from the Serengeti and Ngorongoro Crater, and therefore very large pastures for their herds. Inscribed as a UNESCO World Heritage Site in 1979, the NCA was declared an International Biosphere Reserve with the Serengeti two years later. Two naturalists, the Grzimek (pronounced Jimek), have done much to promote conservation in the area. Michael (1934-1959) died after his plane hit a vulture during the filming of the famous Serengeti shall not die. His father Bernhardt continued, also founding the Frankfurt Zoological Society, and marking the nature conservation policy of many of the world's wilderness areas, until his death in 1987. A stele is erected on the rim of the crater in honour of his son.

Today, many Maasai live in the vast Ngorongoro Conservation Area, but have not been allowed to descend into the crater since 1970 to let wildlife take its course at least in this area. In spite of the fauna and the dangers it can represent for man (lions, snakes...), the Maasaïs walk armed with their bravery and experience. In the conservation area around the crater, they can be seen in the distance walking at the head of their herds, in their villages, on the side of the roads...

An exceptional animal reservoir. During the last census, in the rainy season, 55 species of mammals were counted: ostriches, crowned cranes, Kori bustards, zebras, Thomson's gazelles, Grant's gazelles, wildebeests, hartebeests, elands, cobes, buffaloes, warthogs, jackals, hyenas, lions, elephants, black rhinoceroses, hippos, thrushes, and baboons, not to mention flamingos and dwarf flamingos, leopards on the slopes, and a few servals... Only the cheetah, giraffe, damalisque and impala are missing. It should be noted that a good part of the animals remain trapped by the 600 m of cliffs surrounding the flat bottom of the caldera. Less than half of Grant's wildebeest, zebra, buffalo or gazelle come out to the outer slopes on the west side in the dry season; ostriches, elk or hippos are completely native. On the other hand, elephants, who are very good climbers, do not hesitate to go and drink in the plantations on the outer slopes on the east side, which of course causes problems with the populations. On the other hand, with regard to black rhinos, the Tanzanian authorities are bringing in specimens from South Africa (about €100,000 the transfer price for each).

Heroes Point. The climb from the gate of the conservation area is epic in 4x4 as the rocks are everywhere, the engines force and the race is on! Very hard on your health and on the car. When you reach the summit, you can finally admire the crater at the famous Heroes Point, the lookout point that offers a 600-metre view of the crater's interior. On the horizon the clouds lick the ridge line to evaporate inside, magical! Then two options, either continue inside the crater and visit it, or continue towards the Serengeti crossing the areas populated by the Maasai who still live in the area outside the crater to reach Seronera.

The crater. The first European to reach the crater was Oskar Bauman, an Austrian explorer, in March 1892. By 1921, Major Dugmore estimated the wildlife in the crater at 75,000 animals. This figure was probably exaggerated. Today, counts estimate an animal presence of more than 20,000 head, and it seems that the natural vegetation on the ground is being exploited to the maximum by the herbivorous fauna. The crater, a UNESCO World Heritage Site, is a caldera, a gigantic ancient crater, perhaps as high as today's Kilimanjaro, but which collapsed about 2.5 million years ago after the entire interior, pushed by eruptive gases, was emptied and poured out onto the surrounding plains, forming in particular the upper layer of the Serengeti. It is said that fumaroles are still sometimes present above the centre of the crater. The Ngorongoro Crater (one of the 115 in the conservation area) is today the place with the highest animal density in Africa. For the mystics, it is a chalice where nature shows the presence of God by reflecting its splendour, a kind of natural Noah's Ark.

Orientation in the crater. It is home to Lake Magadi (which means soda), a large alkaline lake more or less dry depending on the season, where many flamingos come. To the south of the lake is the Leraï forest, inhabited by elephants, cobes and monkeys, which are by definition arboreal. Rhinos also usually live there at night. They often leave between 8 and 9 in the morning to reach the plains, a little far from the track, where they lie down if it is windy. In the south-east, near the Gorigor marshes, lions are frequently seen behind the tall grass. At the end of these marshes is a pond, Ngoitokitok Springs. It is a corner inhabited by elephants, a few hippos and many kites. On the way to the centre of the crater, hyenas can be found, and the hippo pool where, during the day, vehicles come quite close to these aquatic mastodons. To the north, one can walk along the Munge River, near which are the ruins of one of the farms of the Siedentopf brothers, who had started to exploit the crater at the end of the 19th century (the other farm, behind the Leraï forest, is the rangers' building). 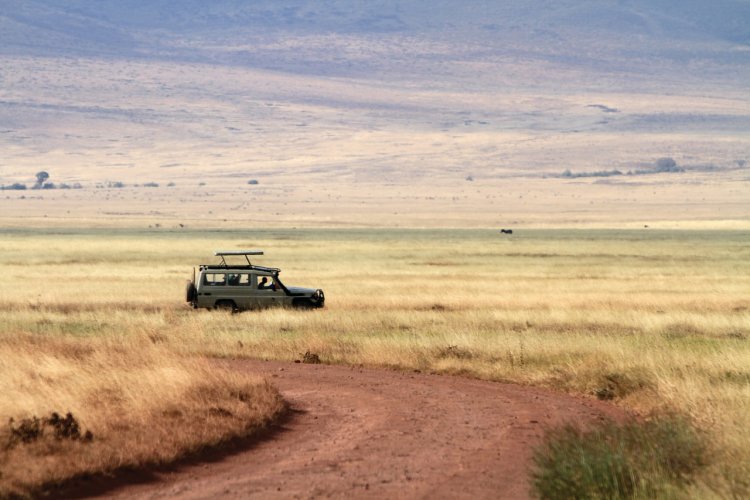 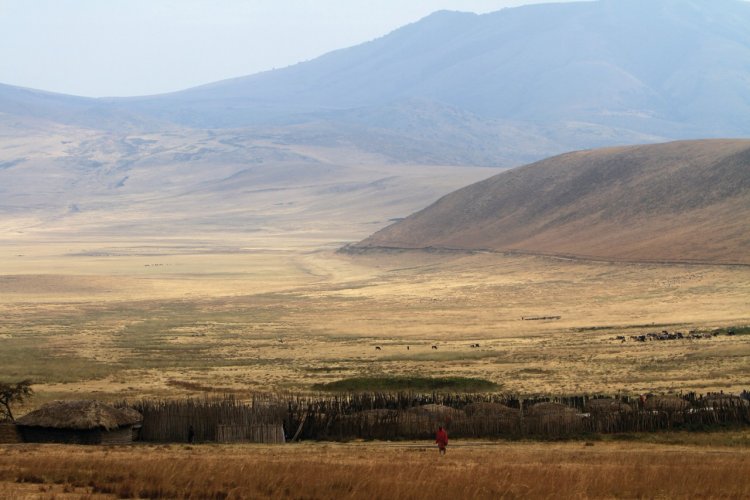 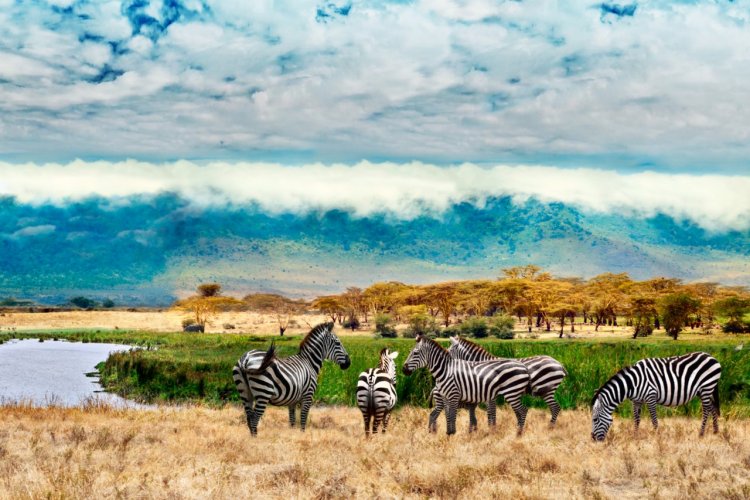 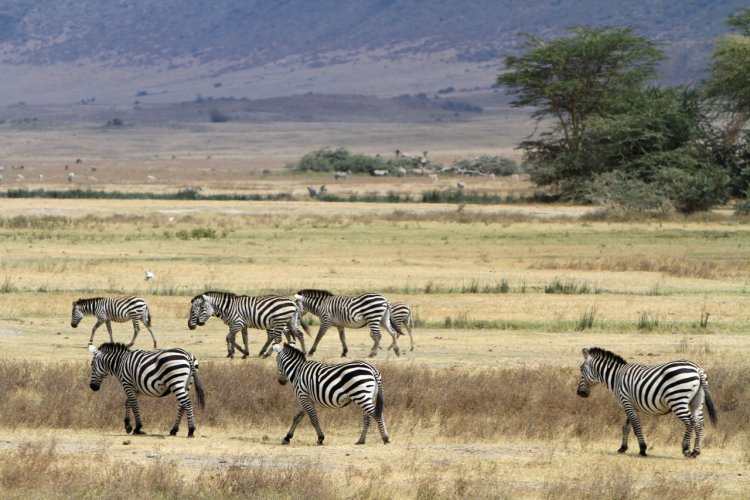 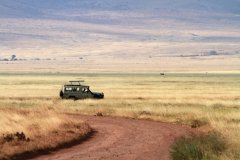 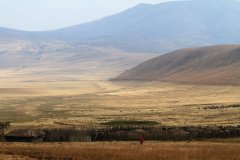 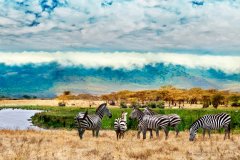 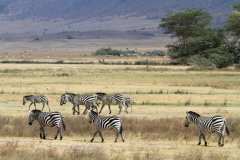