A unique and fantastic mixture of several eras and various architectural and cultural influences, Plovdiv is a plural city with fascinating faces, which earned it the choice of European Capital of Culture in 2019. Encompassing both banks of the Maritsa River and seven hills, Plovdiv comprises a modern centre with pedestrian and shopping areas, and above all an exceptional old town centre where the narrow cobbled streets are lined with houses from the National Renaissance period and others older, mostly from the 18th and 19th centuries. The second largest city in the country with 593,000 inhabitants, Plovdiv is also one of the top tourist destinations, with the most fascinating old town in the whole country. Plovdiv is the hub of the peninsula's road and rail networks, as well as being a dynamic university town and the capital of Bulgarian contemporary art. If only for its evocative Roman amphitheatre, the best preserved in the whole country, and for the maze of colourful alleyways that cover it, it should be an obligatory stop on his trip to Bulgaria!

History. Located at the crossroads of the routes from Europe to the Near East, from the Baltic to the Mediterranean and from the Black Sea to the Adriatic, the city of Plovdiv has a thousand-year history. While the first traces of occupation of its site date back to the Neolithic period, in the 1st millennium BC, the Thracians founded the ancient Evmolpia and the city was part of the powerful kingdom of the Odrysses.

Conquered in 342 BC by Philip II of Macedonia, it was renamed Philippopolis, and soon became a den of thieves and brigands fleeing from other regions. Pliny the Elder even wrote that the city was also called Peneropol, or "the city of delinquents"!
After a number of struggles between Thracians and Macedonians for control of the city, Plovdiv was colonized by the Romans, who transformed it into a merchant city, located on the Constantinople - Belgrade road, also known as Via militaris, a major military road. It was Emperor Claudius, who conquered ancient Thrace in 46, and then Domitian, who modernized Plovdiv to make it a commercial centre. The boom was short-lived, and one devastating incursion followed another. The Goths plundered the city in 251, then in 447 the passage of the Huns plunged Plovdiv into a long agony, which ended only with the arrival of the Bulgarians.
The 10th century, under the authority of Tsar Simeon, was a period of prosperity, but of short duration. In 971, the Byzantine Emperor John Tzimbes took over the city. The Crusades of 1147 and 1190, which passed through the area, led to looting and a general fire, which forced the inhabitants to rebuild the town at the beginning of the 13th century. With the arrival of the Turks, a large part of the Christian population of Plovdiv left the city, so that by 1578 there were only 250 Christian homes left. Because of its geographical position, the city quickly became an important commercial centre in the Ottoman peace. While the Muslim populations developed modern residential areas, Christians were tolerated on the hill, which is now called the old quarter.
It was in the 15th century that the name Plovdiv appeared for the first time, coming from one of its medieval names, "Poulpoudeva or Paldin".
On January 17, 1878, while Bulgaria was being created, General Gourko's Russian troops liberated the city. At that time, Plovdiv was the largest city in Bulgaria. After the Congress of Berlin (1878), it became the capital of Eastern Rumelia, the vassal region at the Great Gate, and became Bulgarian in 1885. Public and cultural life was increasingly rich and lively. In Plovdiv have lived and worked several famous men such as the writer Ivan Vazov, the sculptor Konstantin Velitchkov, the politician Zahari Stoyanov... Alphonse de Lamartine also stayed there for some time and the memory of his stay is still vivid. Throughout the 20th century, Plovdiv played its role as the second largest Bulgarian metropolis and was at the centre of important political and cultural movements.
The city is today, in addition to its function as an economic metropolis, a major cultural centre, with its opera, theatres, including puppet theatres... Plovdiv City Hall regularly organizes festivals, exhibitions and biennials, including the Old Town Festival in September.

The must-see places in Plovdiv (Пловдив)

Prepare for your trip Plovdiv (Пловдив) 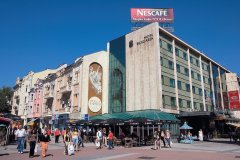