Discovered in 1744 by Lazare Picault, Curieuse took the name of the schooner that Lampérière commanded in 1868, under the command of Marion Dufresne. Approximately 3.5 km long and 1.5 km wide, it is barely 1 km from Anse Boudin, north of Praslin. Although it is not very high, with its highest point at only 172 m, it has a rugged terrain and appears impenetrable. A generous vegetation covers it: mango trees, banana trees, orange trees, jackfruit trees, beef hearts, and even sea coconut trees! But of the large colony of yesteryear, which covered almost the entire island, only a few stumps remain. Four hundred and twenty feet of cocos de mer were planted in 1998, in the hope of seeing the rebirth of such a beautiful coconut grove as the one that was accidentally set on fire in 1771 by sailors on a British corvette in search of the famous cocos. A few sea coconut palms, on the other hand, have survived here and there, on the edge of the ravines and on the rocky slopes of the north of the island.

Curious, although stripped of its precious old-fashioned sylve, it is nevertheless attractive. Its enormous takamakas (surely the largest in the archipelago) shade a coastline whose coves serve as natural harbours for sailors who like to anchor in unknown lands. A land where turtles have replaced lepers. A camp had indeed been opened there as early as 1833, to house a hundred lepers from Mauritius. They were soon transferred to the islands of Ronde and Praslin for the men, and Mahé for the women, causing concern to the Prasliners and Mahelois, who feared that this dangerous neighborhood would spread the disease to their islands. As a result, under persistent pressure from the population, the authorities managed to reopen the Curieuse leprosarium in 1938, the last lepers having only been transferred to Mahé, at Anse Boileau, in 1965.

Today only burnt houses remain from that time, as well as a large uninhabited colonial mansion, once reserved for Dr. Mac Gregor, the Praslin doctor who used to come here regularly. This atmospheric house, where a scene from Goodbye Emmanuelle was filmed, has been restored and converted into an education and information centre. The latter, financed by France, was inaugurated in 1996 in the presence of the French Minister of Cooperation. Only one family, the Suzette family, lives on the island and is in charge of maintaining the park, where very young sea turtles live sheltered from predators (cats, rats and crabs), behind a long stone dike. The keeper monitors the eggs that the females lay in May and June in the sand where they must stay for two months before hatching. Only then will the newborns be carried into the life-saving pen. About a hundred giant land turtles, the oldest of which is a century old, live in semi-liberty on this island where some thirty thousand visitors a year land, who do not deviate from the tourist trail. This pleasant official path leads to the doctor's house through a strange terrain ploughed by enormous crabs, and through a mangrove rich in six varieties of mangroves. The island is also known for its remarkable granite formations at the mouth of the very photogenic Laraie Bay. All these curiosities do not really justify the tax of 200 SR (including access to the islet Saint-Pierre) that every visitor has to pay to wander around the leper island, this excursion of a few hours being on the program of several hotels and excursionists in Praslin.

Prepare for your trip Curieuse 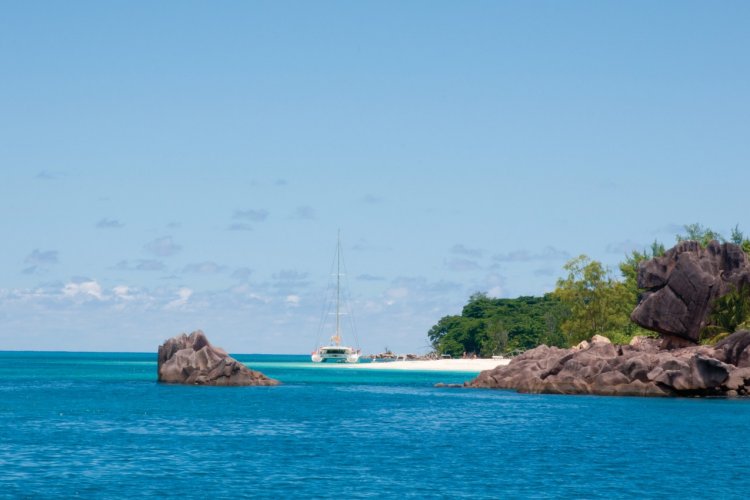