Capital of Europe - it is home to several European institutions such as the Parliament and the Commission - and capital of Belgium, Brussels is always full of atmosphere and welcoming. You can discover it around a beer, gueuze or lambic, but also on the Grand Place, Place Sainte-Catherine, in the French fry barracks or on the terraces of the mussel restaurants, and especially between the alleys of the flea market in Place du Jeu de Balle. We can also read it in the comic strip, of which Brussels is the epicentre. City of Hergé and Schuiten, we meet Tintin, Spirou and Les Cités obscures on the walls of the buildings and in the Belgian Comic Strip Centre. Its urban animation exists even in its suburbs, far from the historical centre, from the Marolles to the Châtelain, from the Cinquantenaire to Molenbeek. Brussels is also a green capital, with many parks, gardens, such as the Brussels Park or the Cinquantenaire Park, and even a forest on the edge of the city. A city of culture, Brussels is also home to the famous Atomium, near the Royal Park of Laeken, and the Mont des Arts, which houses the Magritte Museum. Also note that Brussels is the second largest French-speaking capital in the world, although it was originally a Dutch-speaking Brabant city, a language that is still used alongside French! A tourist guide dedicated to Brussels will allow you to discover all its mysteries and to know the best places to visit.

What to see, what to do Bruxelles - Brussel? 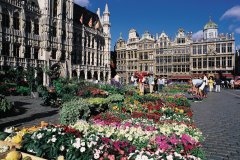 What to visit Bruxelles - Brussel ?

When to go Bruxelles - Brussel ?

Brussels is dynamic all year round, but with only one drawback: its cold and rainy climate. To know when to go to Brussels, here are some tips.

High tourist season: The best time to go to Brussels is between May and September, when temperatures become more pleasant and rains less frequent. February, for carnivals, and December, for Christmas markets, can also be the subject of a few days getaway. Belgium means folklore and tradition. Be careful to check the dates of the Brussels festivities. Some parades sometimes cause heavy traffic jams in transport, such as during carnivals. As a worthy European capital: it is preferable to avoid the car to travel around Brussels on European summit days in particular.

Mid-season tourism: Although there is never any inactivity in Brussels, there are fewer tourists between November and March, excluding the Christmas and New Year period. The climate is indeed quite prohibitive.

Due to the Covid-19 pandemic, entry and travel restrictions may apply Bruxelles - Brussel. Remember to visit the site of the Ministry of Foreign Affairs before you leave for the latest information
Practical information for travel Bruxelles - Brussel
Formalities Budget Horaires Getting around Gastronomy

A weekend in Brussels

Discovery of the flat country

How to go Bruxelles - Brussel

It couldn't be easier. Brussels is only 1h30 from Paris by Thalys and 40 mIn from Lille by Eurostar or TGV. Brussels Airlines, the Belgian national airline, operates daily flights from Paris-CDG, Lyon, Marseille, Nice, Strasbourg and Toulouse to Brussels Airport in Zaventem. You will have no language barriers or cultural differences. You will then fully enjoy your stay, without any questions.

An organised trip to Brussels will offer the classic tours, Atomium, Grand-Place and Marolles, as well as excursions to Bruges and Antwerp. Going with a tour operator will allow you to get prices on accommodation and transport.

Brussels is above all a city that can be visited on foot. The distances between the main tourist attractions are not great. However, the city is very well served by public transport. The centre is well served by a network of metros (four lines) and trams operating in tunnels, known as " prémétros ". To get to areas outside the Pentagon, you will often have a choice between tram and bus.

Brussels, the capital that you must discover by bike!

From 1890 to 1910, Art Nouveau refused the academic rules. It favours lines and curves. This conception close to nature (motifs from fauna or flora) makes art accessible to all. Wood, stone, steel or glass allow this democratization. Brussels is full of buildings signed by Horta, Hankar or Van de Velde

The Atomium was built for the 1958 World Fair. Its structure is an iron crystal enlarged 165 billion times. Inside, thematic exhibitions about Belgium and digital arts. Dominating the capital on the Heysel plateau, the Atomium reaches 102 meters. It offers a breathtaking panoramic view of the entire city

Belgian comics were born in 1926 with the first adventure of Tintin. In 1946, Hergé and his collaborators (Jacobs, Tibet, Cuvelier...) laid the foundations of the Brussels school: clean and legible lines, refined and vivid colors. A comic book museum and frescoes in various places in the city center brilliantly commemorate the 9th art!

Brussels and its region are home to a few categories of beer that cannot be found elsewhere. Lambic, for example, is a spontaneously fermented beer and the matrix of gueuze and other krieks. Gueuze is the result of a blend of lambics, fermented in barrels before refermentation in the bottle. The kriek is born from the addition of northern cherries to young lambic.

The European Commission, the Council and the Parliament are based in Brussels. The Leopold and Schuman districts, transformed for the occasion over the last 3 decades, house several institutions in buildings with contemporary architecture. The former Luxembourg train station serves as an information point for visitors.

Belgium is famous all over the world for its chocolate, and Brussels is its most beautiful showcase. All brands, from the most common to the most prestigious, are represented in the vicinity of the Grand-Place and other strategic locations. The taste of the Belgians remains mostly classical. The praline and its ballotin were invented in Brussels.

Hardwood forest of 4,383 ha located in the three regions of the country. Mainly made up of old beech trees with long boles, earning it the name of cathedral forest. Superb in all seasons. With its urban extension, the Bois de la Cambre, it is nicknamed the "lung of Brussels". It is one of the largest peri-urban forests in Europe.

The ancients built the heart of the city away from the traffic routes. Seven streets lead from the square to the gates of the first wall. The Grand-Place groups the houses of the guilds around the town hall. Victor Hugo spoke very highly of it. It is often called "the most beautiful square in the world".

The brilliant painter, author of so many beautiful paintings, is put to all the sauces undoubtedly to justify the innate or acquired surrealism of the Belgians. His famous "Ceci n'est pas une pipe" (This is not a pipe) is known to everyone and sounds almost like a national motto. For some years now, even the awards for Belgian cinema (their Césars) are Magrittes.

Called the ketje of Brussels, this impertinent kid who embodies the carefree and resilient spirit of Brussels, with which the authentic Brusseleirs have often identified. Manneken Pis is also a babeleir (talker), a zwanzeur (party animal) and a stoefer (show-off). He owns more than 1,000 costumes that can be seen in the museum named after him

Although Brussels is not Paris, London or Amsterdam, the Belgian capital does have some major museums for which people travel from abroad. The Magritte Museum is the most visited in the Kingdom (with 3.2 million visitors). It is part of the Royal Museums of Fine Arts, which were founded in 1801 by Consul Bonaparte

In the popular language, a zinneke is a mongrel. This is the word with which the inhabitants of Brussels characterize their dog if it is not purebred. But isn't the authentic Brussels citizen also a zinneke? So many migrants have stopped or taken root here for centuries that crossbreeding is certainly their true nature.

You can't stand being compared to a French or Dutch person.

You no longer try to imitate the Brussels accent. You have acquired it... or not.

You go to at least one festival or folklore event every summer.

You can't resist the temptation of a French fries cone to eat in the street or at the bistro.

You know that "No, maybe!" simply means "Yes, of course!"

You happily taunt the royal family, but can't stand it too much when a stranger takes it on.

You don't believe it if a foreigner tells you after half an hour of explanations that he has figured out how Belgium works.

You know the difference between a Brussels waffle and a Liege waffle.

You smile when someone claims to have had a beer when it was a Heineken.

You know at least one song by Grand Jojo, Stromae or Annie Cordy by heart

Other destinations nearby Bruxelles - Brussel