When Matrix Resurrections was released in theaters at the end of last December, the audience had the pleasure of being transported to the streets of San Francisco. The film, produced, co-written and directed by Lana Wachowski and starring Keanu Reeves and Carrie-Anne Moss who reprise their roles as "Neo" and "Trinity", was shot in 2020 in the Financial District, Chinatown, North Beach, Russian Hill and South of Market. The event gave the San Francisco Office of Tourism (SF Travel) the ingenious idea of creating a walking route through the various locations where the scenes in the film take place. The route passes by places offering 360° panoramas on the city of California, but also at the foot of emblematic buildings such as the Sentinel Building/Columbus Tower and at the edge of the bay. More information on the SF Travel website and on the Google Map. 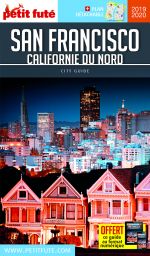 Passionate, fascinating, sometimes even revolting, California never leaves anyone indifferent. If the greatest have sung ... Read the article

Inherited from the libertarians of the 1960s, hippie culture may well have the wind back in its sails! Indeed, what ... Read the article

Vegetarian and epicurean, you want to travel to awaken your taste buds? It is true that in some countries, meat is ... Read the article