Liberty, high-tech, multicultural, artistic... Frisco, the golden city, is also characterized by its ecological fibre and its softness of life. A unique and yet quite plural city at the mercy of the hills and districts, with its nicknames: SF, The City, City by the Bay, San Fran, The Golden City, Fog City... A tour guide on San Francisco will help you understand this fascinating and inspiring city. The city of seven hills is marked by a rich maritime past and successive waves of immigration, due in particular to the gold rush. Its geography and personality have made it the cradle of countless movements, such as the Beat Generation, the liberation of the LGBT community or American pacifism, and continue to inspire it with an extraordinary entrepreneurial spirit. And it's a whole variety to discover: SoMa and her generation of hipsters, Haight and her musicians, Castro and her gay population, Mission and her Hispanic enclave, Chinatown and Japantown... And new neighbourhoods are already emerging. The restored Piers du Nord, from where we board to join the Alcatraz prison. San Francisco is also the starting point for a possible road trip to the American West and Northern California, with a wild coast along Highway 1 and the Pacific Ocean, redwood forests, but also fertile valleys in the Gold Country and Sacramento. Launch out on the Golden Gate Bridge and taste the Californian dream!

What to visit San Francisco?

What to do in San Francisco ?

Smile in the corner and view on the Pacific, welcome to San Francisco, the eternal city of happiness! Tolerant, dynamic, the city has many advantages to seduce all travelers with impetuous judgments. Cosmopolitan streets and museums of all backgrounds will welcome you in this metropolis where the Transamerica Pyramid pierces the clouds while contemplating the immense red iron silhouette, named Golden Gate, which galore on the ocean. Faced ...

When to go to San Francisco?

San Francisco is an active and dynamic American metropolis all year round. However, here are some tips on when to leave, depending on your interests.

The high tourist season is of course summer in San Francisco and throughout Northern California, as many international travellers take their holidays in July/August. So you will see many Europeans at this time of year. Swimming enthusiasts, be careful! San Francisco is by no means a destination where it is good to relax by the sea. Whatever the season, the water is cold and the wind blows. So people come here more to surf than to swim in the sea. In summer, you will have to head to Half Moon Bay to find pleasant swimming areas. The best time to visit San Francisco is not necessarily in the summer. The Christmas holidays and the Thanksgiving Bridge are also very busy, with many Americans returning home. San Francisco lives all year round, but if you only had to choose two events in San Francisco, you could mention for example: the LGBT Pride, on the last Saturday in June, the festivities gather around the Civic Center and on Sundays it is the gigantic parade; and the Chinese New Year and Parade: the event has taken place since 1860, the Chinese New Year's Day in San Francisco is grand. Celebrations are taking place in other major Chinese centres in the region, including Oakland. Every year in February.

The low season begins in September/October and ends in March (excluding end-of-year holidays). You can try to negotiate prices for your hotels, especially outside San Francisco. If you want to avoid tourists, it is better to plan a trip in the spring or fall. January is often rainy, although you can have beautiful sunny days with temperatures around 20°C.

The configuration of San Francisco Bay explains an extremely variable and misty climate. In the same day, you can go from a wonderful sun to an intense fog. It is generally mild and humid, especially in the fall and spring. In all seasons, fog is likely to fall and nights are always cool. Paradoxically, it is often in summer that the weather in San Francisco is the worst, as fog is particularly present

San Francisco is an expensive destination. Expect about US$4 for coffee, US$20 for a meal in a restaurant and US$2.75 for a transport ticket. However, there are some good deals on clothes. The rental of apartments is extremely expensive. No hotel room under 80 US$ and count 150 US$ to feel a little more out of place. For the rest, the prices are similar to those in France. But gasoline is still cheaper!

You need a biometric passport to go to the United States. This passport qualifies for the Visa Waiver Program for stays of less than 90 days. To do so, you will need to fill out the ESTA form online at https://esta.cbp.dhs.gov and pay an administrative fee of US$14, payable since September 2010. Be careful to fill in the form by passing only through the site previously mentioned. Finally, for any stay longer than 90 days, the visitor must be in possession of a visa. Several types of visas exist (student, work, etc.), but they are all quite difficult to obtain. More info on https://fr.usembassy.gov/fr/

There is no health risk when travelling to San Francisco and the United States. The health level is the same as in France. No special vaccines are required. On the other hand, note that the American health system is much less efficient than ours and an unexpected medical consultation can be very expensive. Therefore, provide special insurance if you stay there for a long time. Note, however, that while the beaches are beautiful, not all of them are authorized for swimming. Find out about tide times and the direction of the currents, which are sometimes dangerous. Do not swim alone, too far from the coast. Avoid sudden diving into the water after prolonged exposure to the sun, especially since the Pacific water is quite cold (below 15°C in summer). Beware of sunburn! High temperatures prevail in the desert near the city and the sun's rays can be aggressive and dangerous

How to go to San Francisco? Our advice & tips

San Francisco is a common destination for French tour operators. Offers range from a city tour, usually within a week, to a visit to the state of California, via San Francisco. An organized trip may be of interest to those who do not speak English, and who plan to leave the city for excursions.

Those who do not speak English will certainly be a little handicapped, but the locals form a multi-ethnic community, you can often exchange in Spanish or even Chinese.... And the inhabitants are very kind and always ready to help you. No difficulty to travel alone, rent a car, book your motels or hotels on a daily basis and leave according to the roads. In San Francisco itself, follow the grid of streets and avenues and our visiting tips.

San Francisco has a wide network of ferries to reach other cities in the bay, while avoiding traffic jams. San Francisco also has a good bus network. They are mainly intended for residents who visit their workplace and service is limited in the evenings and on weekends. The city also has a metro that is the best means of urban transport. Finally, the Cable Car, a rack and pinion tramway, criss-crosses the city

Prepare for your trip San Francisco 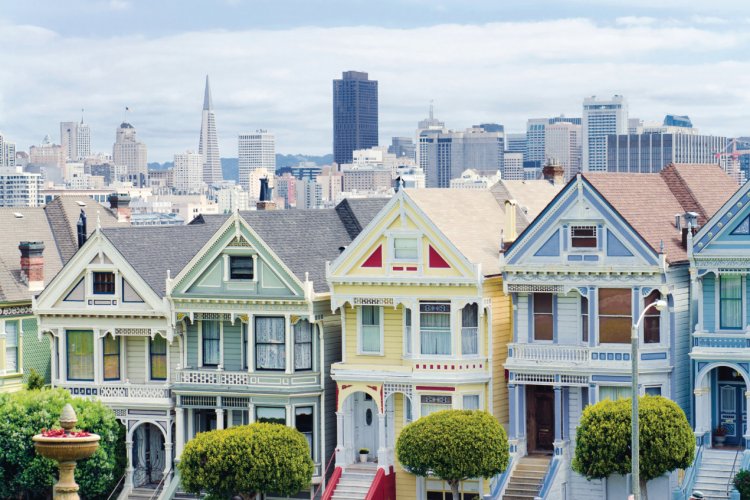 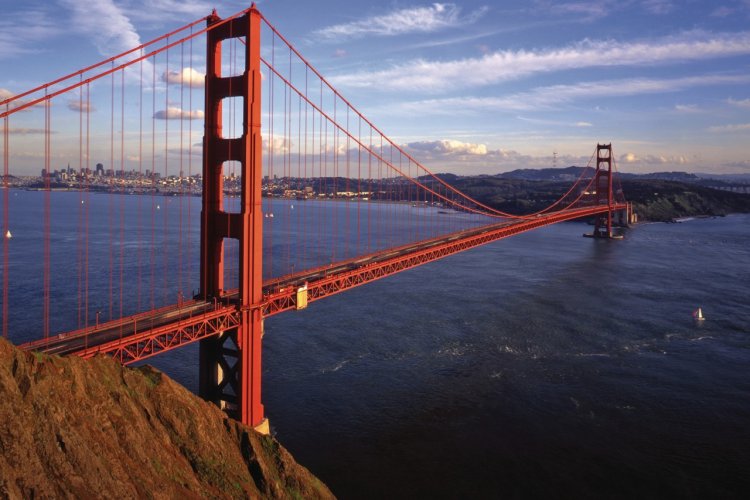 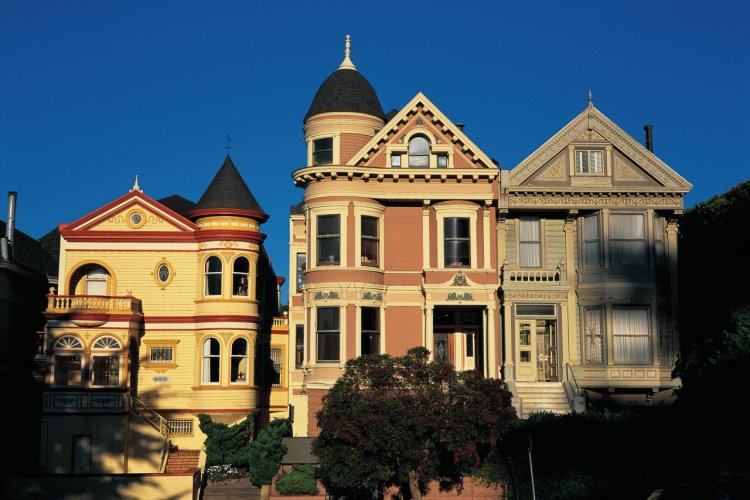 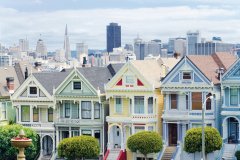 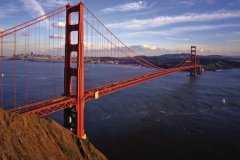 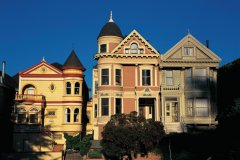 San Francisco is an active and dynamic American metropolis all year round. However, here are some tips on when to lea...
Read more about it

The configuration of San Francisco Bay explains an extremely variable and misty climate. In the same day, you can go...
Read more about it

San Francisco is an expensive destination. Expect about US$4 for coffee, US$20 for a meal in a restaurant and US$2.75...
Read more about it

You need a biometric passport to go to the United States. This passport qualifies for the Visa Waiver Program for sta...
Read more about it

There is no health risk when travelling to San Francisco and the United States. The health level is the same as in Fr...
Read more about it

Those who do not speak English will certainly be a little handicapped, but the locals form a multi-ethnic community,...
Read more about it

San Francisco is a common destination for French tour operators. Offers range from a city tour, usually within a week...
Read more about it

San Francisco has a wide network of ferries to reach other cities in the bay, while avoiding traffic jams. San Franci...
Read more about it

When Matrix Resurrections was released in theaters at the end of last December, the audience had the pleasure of being transported to the streets of San Francisco. The film, produced, co-written and directed by Lana Wachowski and starring Keanu Reeves and Carrie-Anne Moss who reprise their roles as "Neo" and "Trinity", was shot in 2020 in the Financial District, Chinatown, North Beach, Russian Hill and South of Market. The event gave the San ...

Passionate, fascinating, sometimes even revolting, California never leaves anyone indifferent. If the greatest have sung and filmed it, from the Eagles to the Red Hot Chili Pepper, the best thing is to live it to the fullest by exploring its territory as big as three quarters of France. Arid deserts, sprawling cities and authentic national parks: that's what awaits you on a road trip in the Golden State! Petit Futé takes you on a journey of ...

Inherited from the libertarians of the 1960s, hippie culture may well have the wind back in its sails! Indeed, what could be more topical than this fight against consumer society and this desire for hedonism? We're even betting on a very trendy return of the ephemeral pants and the flower shirt! Some places in the world have never abandoned this philosophy and still present themselves today as bastions of flower power. From the well-known ...