The escapade to the Princes' Islands is one of the most beautiful excursions you can make from the centre of Istanbul. It is an archipelago of nine islands administratively attached to the city: Büyükada, Heybeliada, Burgazada, Kınalıada, Sedefadası, Yassıada, Sivriada, Kaşıkadası, Tavşanadası. The Byzantines called them Demononissia (Islands of the Demon), Papadonissia (Islands of the Priests) or Pringiponissia (Islands of the Princes) and the Ottomans Kızıl Adalar (Red Islands) because of the color of their land. During the Byzantine era, during the iconoclastic period, these islands welcomed the exile of princes but also members of the clergy. Justin II is said to have built a palace and monastery at Bükayada in 569 AD. Later, crusaders and pirates destroyed most of the Byzantine constructions. Jeremie Çelebi Kiomurtzian tells that in 1680 most of the islands were inhabited by Greeks who had built many monasteries and churches. In the 19th century, wealthy Greek and Armenian families from Pera built beautiful summer residences and moved in during the warmer months. It was only after 1923 that the Princes' Islands began to attract Turkish holidaymakers. Today, the development of tourism risks radically transforming their traditional style, but fortunately the Ada Dostları ("friends of the islands") are fighting to prevent the construction of large hotels and the introduction of a bus service. The three most popular islands are Büyükada, Heybeliada and to a lesser extent Burgazada. Note that some of the islands are uninhabited, and therefore inaccessible by public transport, to the delight of yachtsmen who can anchor offshore in complete peace of mind. Most visitors make a day visit but it is quite possible to spend the night on the two main islands. In order to avoid disappointment, it is good to know that these islands are above all a walking destination, a great breath of fresh air to take near Istanbul. The small harbours with their restaurants (of a poor quality/price ratio) and their ice cream shops are quite nice, the flowered alleys with their superb wooden yalı, restored for some or falling in ruins for others, are very pleasant, but on the beach side, alas, we are far from the postcard. No need to look for the charming little cove or the fine sand. Most of the areas suitable for swimming have been invested by promoters who have transformed them into a sort of yacht club equipped with deckchairs whose sound systems spit out the latest pop music. In the genre, Yörük Ali on Büyükada is very appreciated by the local population, but quite expensive. To swim on the big island, it is best to turn left as you disembark and swim near the pontoon along the coast. A walk to St. George's Monastery will be very pleasant, this important place of pilgrimage is located at the top of the hill. For the evening, as you move away from the waterfront, a few trendy bars begin to appear.

Prepare for your trip Islands Of Princes - Adalar 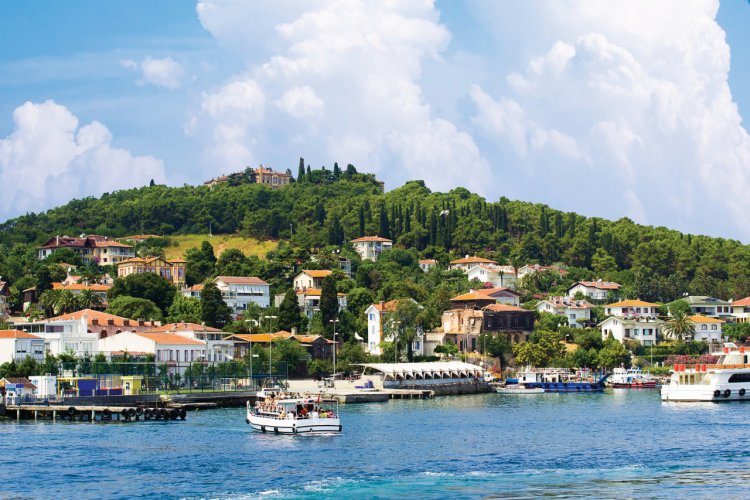 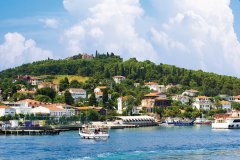