Petit Futé's opinion on THE BEAST

Opened in 2013, this two-storey establishment with a large outdoor terrace is known for its famous bourbons, but also for its delicious cuisine composed mainly of recipes from South America such as cornbread, pork shredded, well-filled hamburgers? Don't miss the Sunday brunch, with an à la carte selection or to be composed according to your desires! The Beast is a condensed version of deep America in Singapore, a very friendly place where nationalities mix to spend a unique moment.

Opening time and information on THE BEAST 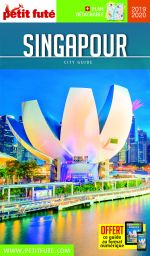