Bayonne, feria and culture in the oldest bullfighting city in France

Bayonne, sub-prefecture of the Pyrénées-Atlantiques and capital of the Basque Country with its exceptional architectural heritage - vaulted cellars from the 12th and 14th centuries, half-timbered houses in the rich colours of ox blood (what a sight on the banks of the Nive, in the heart of the city), stone facades with wrought iron balconies from the 18th and 19th centuries, etc., has thus managed to pull its weight from a rich past and a present in full evolution with many sides. But above all Bayonne loves to celebrate all year round, with a peak of glory at the time of its must-see holidays. Corridas, cow races, dances, songs, the awakening of King Leon, the festivities, the bandas' mass, the teaching of the feast to the little ones... It's all part of the Bayonne Festivals. Unmistakable!

City of Art and History

Here is a label of which Bayonne is very proud! Indeed, there are many museums. The most important visit in this respect is the Basque Museum, which offers, in addition to an exceptional ethnographic collection dedicated to the Basque Country, temporary exhibitions, à la carte visits, activities for all audiences and cultural activities. Located in the heart of the old town centre, it contains, on 2,000 m² of exhibition space, objects and works of art - collected mainly at the beginning of the 20th century - that bear witness to the functioning of Basque society. The history of Bayonne, a maritime and river port, is also evoked, at the confluence of Basque, Gascon and Jewish cultures... The tour, divided into 20 thematic rooms, is organised around the argialde, a vast skylight. Nearly 2,000 objects and paintings on display illustrate the different aspects of Basque culture: rural and domestic life, funeral rites, crafts, maritime and river activities, festivals and games, regional history... The room on the relief plan of the port of Bayonne in 1805 offers keys to discover the historic city whose roofs stand out behind the windows on the top floor of the museum. A stone's throw away, on Paul-Bert Square, scholars can visit the museum's library. The latter is nestled in the north wing of Château-Neuf, an imposing fortress built in the 15th century and now classified as a historic monument. With its 30,000 documents, books on Basque culture, newspapers, 19th and 20th century and contemporary journals, this documentation centre is one of the most important in the region.

But Bayonne is especially famous for its ramparts. Built in the time of Vauban to protect the city, these ramparts combine three fortification systems built over the centuries: the Citadel, the Château Vieux and the Château Neuf. In the city, there is a large and double belt of old stones, the gate of Spain, a Roman and then medieval wall with its towers, the Two Sisters, the Executioner, a 16th century wall said to have been built by Francis I and in the lower city, the gate of Mousserolles with its drawbridge. Today, they have been converted into an attractive promenade with a nature theatre and playground, which gives a beautiful view of this corner of Bayonne, near the Château-Neuf.

Finally, it is also important not to miss the cathedral. Built on the hilltop of the Grand Bayonne, on the site of a burnt down Romanesque cathedral, this jewel of the architectural heritage, a masterpiece of French Gothic art, is listed as a UNESCO World Heritage Site on the Route to Santiago. The works began in 1258 and were completed at the end of the Hundred Years' War. You can contemplate the chevet of the cathedral, the superb stained glass windows of the high well restored windows. Not to mention the famous bells of the cathedral

But Bayonne is also a river city, between the 78 km long Nive river and the 335 km long Adour river, Bayonne lives to the rhythm of its... waters in which its traditional houses are nicely reflected. Moreover, a walk on the banks of the Nive is an enchantment at any time of the day but also and especially at sunset when the superb Basque houses, with their colourful façades, all restored over the past few years, are reflected in the river... A postcard that you have all had the opportunity to see, no doubt! And to soak up the atmosphere, walk along them... and you will also discover the Chaho, Galuperie, des Corsaires, Jauréguiberry quays... where there are many good and typical restaurants, not far from the Basque Museum.

Bayonne is the oldest bullfighting city in France. One of the very first elements found in the municipal archives dates back to 1289, it is a decree of the Bayonne aldermen that regulated the running of oxen, cows and bulls in the streets of the city. Later, ephemeral arenas were built in different districts: St Esprit, Allées Marines, Allées Paulmy, before the construction in 1893 of Plaza Marcel Dangou. The current arenas are in the neo-Moorish style with a Mudejar inspiration. Historical events have marked the times, with the greatest visitors who gathered in Bayonne around the Taurine Festival: Philippe V of Spain, Napoleon III and Eugénie de Montijo, Mérimée, Gustave Doré, Montherlant, Hemingway, Picasso, Botero... and the most prestigious names who came to meet the great breeders, Mazzantini, El Cordobés, Antoñete, El Viti, Antonio Ordoñez, Paco Camino, José Tomas, El Juli, Castella, Manzanares, and Pablo Hermoso de Mendoza, Juan Bautista, Miguel Angel Perera and Daniel Luque..

Bayonne, to the rhythm of the Holidays

A beautiful story that these Bayonne Festivals imagined in 1932 and which continue in time, with its traditions. Since 1947, the mayor has entrusted the keys of the city to its inhabitants, they are thrown from the balcony of the town hall by star guests... everyone is in red and white and King Leon is the emblematic figure of these festivals, since 1949. This is Léon Dacharry, a popular figure in Bayonne in the 1950s, a lyrical repertoire performer who inspired the famous holiday song: "Oh, Léon, Léon, Léon, roi de Bayonne et des couillons..." A wonderful meeting place, on the one hand the Grand Bayonne, the place of the luminous corso which attracts more than 30,000 festairs on Saturday and Sunday evenings and on the other hand, the Petit Bayonne where from street to street, from bar to bar, bandas and gaïteros (gaïta players, double reed instrument) set fire to all sides. These celebrations are obviously crowned by bullfights, Bayonne being the first bullfighting city in France. For 5 days, all of Bayonne wears white and rouge ! A typical and unavoidable tradition of the Southwest, it is absolutely unthinkable to visit the region without attending or participating in these extraordinary festivities!

When? When? The tourist season begins in May and ends in September. However, the coast offers a pleasant and intimate setting, under a rather mild climate, the rest of the year. To attend this year's Bayonne Festivities, visit us between Wednesday 24 July and Sunday 28 July 2019.

Getting there. By car, plane or train, everything is possible

Useful. To find maps and brochures. 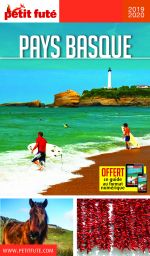 "How do you want to govern a country where there are 246 varieties of cheese?" said De Gaulle. In his famous reply, the ...

Petit Futé offers you the opportunity to discover the continent of Europe in all its splendor as the festivities and ...
Read the article

Turkey is a country that attracts many travellers, who come to enjoy the variety of its landscapes, its mild climate and ...
Read the article

Camping is still very popular in Europe. It is indeed known to be a mode of hosting that allows you to completely ...
Read the article
Review