What if, for a next stay, we took the direction of the Pyrenees? To put down your bags in one of the most beautiful villages of the mountain range, the natural border between France and Spain. Indeed, from the Catalan East to the Basque Country, in the West, there is a multitude of villages with a fortified or simply picturesque appearance. One thing is certain, if the traditions differ from one town to another, the charm always operates by the presence of this nature of a breathtaking beauty. From the summits to the valleys and the coast, here are 10 of the most beautiful villages in the Pyrenees, where it is common to see the label "Most Beautiful Villages in France".

Let's start this top 10 with a village where the word picturesque takes all its meaning. Perched at an altitude of 800 m, this mountain hamlet seems to have remained frozen in time with its superb schist houses topped with lauze roofs, its wash house and its ruins of castles and chapels perfectly maintained and which remind us at every moment of the past medieval life. The village is dominated by the ruins of a castle, which still has a very well preserved round tower. The village is surrounded by a striking natural environment, so there is no lack of opportunities to explore. A walk through the village also includes a visit to the exhibition room dedicated in part to the writer Ludovic Massé, as well as a visit to the small museum of Arts and Popular Traditions

It is impossible to talk about the most beautiful villages in the Pyrenees without mentioning Saint-Jean-Pied-de-Port. The town, an obligatory passage for those who follow the road to Santiago de Compostela before reaching Spain, is a summary of all that the Basque Country has to offer from an architectural point of view. We start by going to see its remarkable citadel, reworked by Vauban, before strolling through the streets and contemplating the typical Basque architecture. Pilgrims, heritage enthusiasts, everyone enjoys discovering this village, whose stores and restaurants offer gastronomic products emblematic of the region. Traditions are also de rigueur in this "Most Beautiful Villages of France", between dances and practice of the Basque pelota

Pearl of the Côte Vermeille, Collioure fascinates as much by the beauty of its heritage as by the beauty of the nature that surrounds it. This village with its authentic and preserved charm in the Catalan country was built on the edge of a bay with turquoise water. Between the castle, the church Notre-Dame-des-Anges and many other buildings, lovers of old monuments have something to satisfy their desire to see beautiful stones. Then, after having walked along the Boramar beach, you will enjoy going into the Mouré district, which reveals colorful facades full of charm. In the background are the Pyrenees, with the inevitable Albères massif. In Collioure, it is easy to understand why so many artists, including Matisse, Derain and Picasso, have chosen to set up their easels here. Moreover, art occupies a place of choice in the village, with places to visit such as the Museum of Modern Art and the House of Fauvism.

Back to the Basque Country to stop in a village where the charm and the identity of the region are best represented. Ainhoa is one of the "Most Beautiful Villages in France" with numerous houses with white facades and red half-timbering. One photographs them in its single street, favourable with the stroll. The walk also passes by its wash house and its church Notre-Dame-de-l'Assomption, astonishing with its bell tower and its superb interior with wooden coffered ceiling. If you are lucky, you will also have the pleasure to watch a game of pelota on the fronton. And to enjoy a nice panorama on the whole of this exceptional village in the Pyrenees, go to the site Notre-Dame-de-l'Aubépine, accessible in 30 minutes of walk

Built on the banks of the Tech river, the village of Amélie-les-Bains reveals facades that seem to live in perfect harmony with the green relief of the surrounding Pyrenees. The village is also worth a visit for its rich religious heritage, such as the chapel of the Rosary and its altarpiece, the chapel of Santa Engracia and the 12th century church of Saint-Quentin. The town also has a market where you can find a multitude of fresh and local products. It is also famous for its thermal baths fed by hot springs. It is therefore a destination of choice for a cure and to take care of yourself. Amélie-les-Bains is also the starting point for many hikes. By joining the Roc de France or the Roc Sant Salvador, the views offered on the Pyrenees are memorable.

This medieval village in the Pyrenees is perfectly preserved. After passing through its monumental gate, it is a pure joy to stroll in its paved, flowered and steep streets. The stone houses are magnificent and the craftsmen's stores open their doors to visitors. You should also visit its ramparts and the church of Santa Maria del Mercadal, which is located outside the walled enclosure and houses furniture dating from the Baroque period. The other must-see monument is the castle of Castelnou, whose origin dates back to the 10th century. It is a true symbol of the medieval period in Roussillon. Moreover, the view of the Canigou massif is simply splendid

Another "Most Beautiful Village in France" worth a visit in the Pyrenees. It is also a major stage on the road to Santiago de Compostela. Surrounded by ramparts, the alleys reveal superb noble houses. Listed as a UNESCO World Heritage Site, the imposing Sainte-Marie cathedral is worth a visit, with its Romanesque-Gothic style and the decorative elements that it houses inside. During a stay in Saint-Bertrand-de-Comminges, you should also go to the foot of the village to see the ruins of the ancient site of Lugdunum-Convenue, founded in the 1st century B.C. Finally, in terms of nature, it's pure happiness with many hiking trails to take on foot or mountain bike to marvel at the Pyrenees.

It is between the Conflent valley and the Canigou mountain that this pretty village with its stone facades is located. Built on a granite hill, its different levels perfectly follow the undulations of the landscape. Inside the village, a maze of narrow streets awaits walkers, with the center of the village reserved exclusively for pedestrians. To enjoy an exceptional panorama of the surrounding natural landscapes, there is nothing like reaching the Saint-Vincent church, built on the old ruined castle. From artisan stores to café terraces, Eus offers an idyllic stopover, and this Most Beautiful Village in France is also one of the sunniest in the country.

This commune, which is the first bastioned city of France, has an exceptional heritage. One thinks of going to see its ramparts before stopping near the Saint-Antoine gate. Then, later on, we push the doors of the Cigar House for an unusual moment, before going to learn more about the village at the interpretation center. The city of Béarn also proudly overlooks the Gave d'Oloron, a beautiful river that is a delight for fishing enthusiasts, but also for those who want to enjoy more dynamic activities such as canoeing and rafting.

We end this top 10 of the most beautiful villages in the Pyrenees at Arles-sur-Tech. Built in the valley along the Tech river and around its abbey, the discovery of this moment is a must, especially when you know that it is the oldest Carolingian abbey in French Catalonia. The churches of Saint-Sauveur, Sainte-Croix and Saint-Pierre-de-Riuferrer are other buildings to contemplate. During a walk through the town, you can also go to the foot of the villa Les Indis, the current town hall, whose architecture may surprise you, before going to the conservatory of weaving. Once again, the nature that surrounds the village is beautiful. Arles-sur-Tech offers in particular the possibility of quickly going to the gorges of the Fou, with their impressive steep cliffs 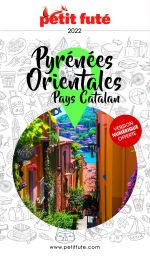