Located in the extreme south of Spain, Andalusia offers a pleasantly surprising change of scenery due to its African influences. On the one hand, the mosaics, the lush gardens, the narrow streets of the medinas and the imposing alcazabas bear witness to the Arab influence of the region, while on the other, the party culture, the castles and the many places of worship remind us of the rest ofSpain. In fact, it was in Ronda, in the province of Málaga, that the rules of modern bullfighting were established, and it can be seen in various villages from May onwards. Halfway between these two influences is the bewitching Flamenco, which has been declared an intangible heritage of humanity, and which can be sung, danced and, above all, felt. With 320 days of sunshine a year on its coastline, this destination is best discovered with a glass of tinto de verano in one hand, a delicious drink made of red wine and lemon soda, and a fan in the other. Although the temperature rarely drops, the diversity of the landscape is such that it is possible to ski in the Sierra Nevada in the morning and sunbathe on the beach in the afternoon, a delight. This tour guide will lead you through the narrow streets of Seville, Cordoba, Granada or Malaga in search of the most typical and unforgettable address.

What to see, what to do Andalusia? 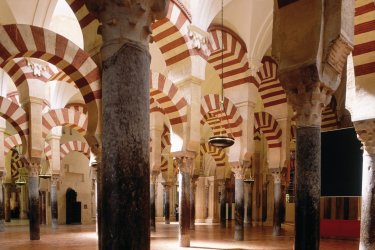 What to visit Andalusia ?

When to go Andalusia ?

Andalusia attracts tourists all year round. The coasts are of course more sought after when the heat arrives, often in addition to a visit to a city. In addition, each major event in a city, Holy Week, Grand Prix sportif, feria..., attracts a greater number of visitors. Holidays are to be checked before you leave, depending on whether or not you want to be in the crowd. Also be aware that more and more hotels are making a price difference between the cheaper week, from Sunday to Thursday, and the more expensive Fridays and Saturdays. Another variable to consider is location.

On the coast. High tourist season: July and August. Mid season: from mid-March to June, September and October. Low season: from November to mid-March.

In the land. High tourist season: June and September. Mid season: from mid-March to May, July, August and October. Low season: from November to mid-March.

Due to the Covid-19 pandemic, entry and travel restrictions may apply Andalusia. Remember to visit the site of the Ministry of Foreign Affairs before you leave for the latest information
Practical information for travel Andalusia
Formalities Budget Horaires Getting around Gastronomy

A one-week stay in Andalusia allows you to discover three essential cities, Seville, Córdoba and Granada and emblematic monuments and places such as the Reales Alcazares, the Great Mosque, Medina Azahara, the Alhambra and the Albaicín district to finish in Antequera. In one to two weeks, you will follow a route that will take you from Seville to the Portuguese border via the Costa de la Luz and the green spaces of the northern part of the province of Huelva. Still from Seville, take the direction of Cordoba. Or make Granada your starting point towards the Tabernas desert, or towards the Costa del Sol, by pushing as far as Nerja. Themed stays will take you along the Jerez wine route or to discover a small paradise, the province of Jaén

Seville for a weekend

Discovery of the Andalusian capital

How to go Andalusia

It is very easy to go alone to Andalusia, the road, bus and air transport network being very developed, organising itself on the spot will not pose any particular problem. Moreover, Andalusians are welcoming and have an easy conversation and the region benefits from a level of security similar to France.

Andalusia being a very popular destination for the French, many tourist tours are available. As the region is very large, it can be the subject of a trip of two to three weeks on its own. However, it could be combined with a visit to Gibraltar or the Algarve in southern Portugal.

Between cities, bus journeys are very popular in Andalusia. The Andalusian road and motorway network is quite developed and of good quality overall, and most of the expressways (four lanes) are not toll roads (except the A7 from Malaga to Estepona and the A4 from Seville to Cadiz).

In the city, Malaga, Seville and Granada have metro-tram lines with attractive season tickets (bonobus) for stays of several days.

The best destinations to rent a villa in Spain

In the southern part of the Iberian Peninsula, Andalusia is made up of eight provinces: Seville, Huelva, Cadiz, Malaga, Granada, Jaen, Cordoba and Almeria. A minimum tour includes the splendor of the Alhambra in Granada, the Mezquita in Cordoba and the Reales Alcazares in Seville. But this vast territory has much more to offer: a brilliant historical and artistic heritage that can be found in each of its provinces. It will lead you, for example, to discover the delightful city of Cadiz and the wine trails of Jerez, the impressive offer of Málaga in terms of museums, the beautiful beaches of Huelva or the Cabo de Gata Nijar Natural Park, a small jewel of Almeria. Without forgetting to go to the inland paradise that is the province of Jaen to admire Renaissance jewels like Ubeda and Baeza. It will also discover through its intangible heritage, flamenco and its Semanas Santas.

To the rhythm of flamenco

On the road to the white villages

You will soon notice it, with a strong tendency to eat a few syllables of each word, depending on the perception of the listeners, but which in their minds corresponds to an aspiration of the syllables. It will take some time to adjust, but you get used to it. Felipe González took pronunciation classes to make himself better understood by his compatriots

This refers to cod but also to very commercial techno music that is very often heard in pubs or discos in Andalusia because it has been a great success since the 1980s. With strident sounds and electronic rhythms. He will also be heard coming out of cars, scooters or radios taken to the beach

The experts slap them in the hand to produce a particular sound. Introduced in the 17th century, they were used to accompany a dance, the fandango, which was forbidden at the time by the Church. They owe their popularity to flamenco and Sevillana of the last century. Today they are much less used for shows.

Its image is strongly linked to Andalusia and it is in Ronda that the rules of modern bullfighting were established. Bullfighters are stars in the same way as actors or singers. And their photos are on display in many coffee shops. They usually take place on the occasion of ferias and are still as popular with some as football

In the spring, you will be able to observe the art of handling the abanico on public transport and in the street. Very appreciated when temperatures exceed 40° C. It is the essential souvenir to bring back from Andalusia. With prices ranging from a few euros to higher prices for models made of fine lace

Andalusia has more than 350,000 gypsies, about 45,000 of whom live in the province of Granada. Their daily situation remains very precarious and it is estimated that six out of ten Spanish gypsy children are still illiterate. In 1996, the Andalusian Parliament declared 22 November as the Andalusian Gypsies' Day in honour of their cultural contribution

We often have to put off until tomorrow, mañana, what we can do the same day. An adage that goes like a glove to Andalusia. Even if the pace has accelerated somewhat today, there is still time to live. Also, don't expect people to run down the street. It is customary here to arrive a little late for an appointment.

Andalusia remains like Spain, which is making noise. It will be attributed to the ambient vitality but it also results from a habit of speaking very loudly, and claimed as such. When you get there, you might as well enjoy this energy. While being attentive to your accommodation if you want to preserve your sleep.

Introduced by the Arabs in the 17th century, olive trees cover nearly 60% of the surface area of Andalusia. This generates 80% of Spain's annual production. Olive oil, the liquid gold of this region, is present in many dishes that pride themselves on being part of the Mediterranean diet. To be tested without moderation

It is especially on the occasion of Holy Week, Semana Santa, that religious processions will take place in the main streets of the cities. With huge pasos, abundantly decorated and flowered altars and a procession of penitents. Followed by a crowd of believers, often arriving well before the ceremonies to be in the front row

As its name suggests, it is the ultimate summer drink in Andalusia. Most of the time served in a tubo glass, with a long form, this drink is composed of red wine, mosto tinto and lemonade. Some establishments add a glass of Martini or ice cubes with seasonal fruits, such as grape berries.

These uvas are the grapes that play a very special role on the evening of December 31. Every grape must be swallowed at every stroke of midnight, so that the year unfolds under the best auspices. A tradition followed by everyone, with their eyes fixed on the clock and punctuating aloud the last digits of the countdown

You are familiar with your contacts, even if you have only recently met them. On the first-name basis is part of the usage. Eventually, use the "usted" and let your interlocutors specify that they wish to use the familiar form.

You have an easy kiss, no outstretched hands, a beso, even an abrazo, the hug.

You don't enjoy your tapa and kibble alone. This is shared, just like the dishes, which are indicated "por compartir", to be shared, and the whole thing will be placed in the center of the table, with a small fork or toothpick.

You know how to be patient. Not everything will be done at the exact time and in the way that we hoped. No need to take it out on a taxi driver or coffee boy, the minuto can last...

You ask people if they speak French or English. Despite some progress, language proficiency is no better than in France