A country as vast and rich as the United States needs to go beyond the discovery of its major cities. The surroundings of the major American cities are therefore an opportunity to discover another America and exceptional landscapes. What would Miami be like without the Everglades and Keys or Las Vegas without the Grand Canyon? Buying a tour in the United States is therefore an opportunity to take a look at it. Focus on Northern California and the surroundings of the mythical San Francisco.

A silhouette of red iron emerges between the clouds, so famous that its fame has long since crossed the Atlantic. So here is the legendary Golden Gate bridge, the splendid bay it spans, the sometimes misty and sometimes bright climate that bathes it, and of course, the city at its feet, the wonderful San Francisco. A city with many assets, which has always stood out thanks to its tormented history, its alternative culture and its open-mindedness. Between the gold rush and beat culture, between 19th century industries and 21st century cutting-edge technology, San Francisco is shaking up and surprising America by constantly reinventing itself. Earthquakes, fires and other misfortunes do not affect the dynamism and eternal optimism of this city, which has always fascinated him. All of them, goldiggers, beatniks, hippies, homos, geeks and other avant-garde spirits; all flock as one man to what is undeniably one of the most fascinating cities in America. Whether on foot, by bike or by cable car, these trams that give San Francisco so much character, you shouldn't miss a few unmissable ones, from the famous Alcatraz prison to the Ferry Building, while passing by to say hello to the sea lions that lounge on Fisherman's Wharf. You can also visit the De Young Museum, this building with its amazing views, feel very small at the foot of the Transamerica Pyramid, a 260-metre high tower and one of the city's symbols, admire Mission's mural frescoes, enjoy tacos or Salvadorian fried chicken, or climb to Alamo Square to enjoy the views from Victorian houses. Because in Frisco, you have to face the hills!

San Francisco claims that it was built on seven hills: Telegraph Hill, Nob Hill, Russian Hill, Rincon Hill, Mount Sutro, Twin Peaks and Mount Davidson. In fact, the heights of the city are much higher, more than forty, and you will not stop climbing up and down during your visit. And to do this, you will use the cable car, this famous little wagon, climbing and descending the hills. This is one of the images of Épinal and one of the pleasures of Frisco. What did you not see these images of onlookers clinging to the steps of the tramway, in streets sloping at 30 degrees, with their noses to the Pacific wind! We'll go to Twin Peaks, for example, to kiss all of northern San Francisco and its bay

Then we will start with delight a tour in Northern California, a real small country in itself. In these grandiose landscapes, where bears and pumas have taken up residence, a road trip makes sense. From north to south and from east to west, the kilometres follow one another, but they are never the same. South of San Francisco, Route 1 winds its way along a rugged and wild coast and joins the mystical landscapes of Big Sur and its cliffs. Beyond the Golden Gate Bridge, it is the Pacific coast, mysterious in its almost Celtic mist, and the playground of grey whales during the season of great migrations. It is also the Wine Valley that gently stretches along sunny vineyards. Because this is the other wine country. Everything is there, between vineyards, gourmet restaurants, pretty residences and even copies of castles

Further north, we enter the kingdom of redwoods, the giant redwoods that are among the oldest and tallest trees in the world. An ideal spot for a return to a prehistoric era still bordered by the ocean

Then, inland, it is the Shasta region, a fierce volcanic region, which is often unknown to tourists. It is nevertheless home to real natural wonders and it is an ideal place for a stay off the beaten track to meet the Californian soul.

A little further south, the famous Lake Tahoe offers turquoise waters in a landscape of pines and mountains, where embarking on a kayak trip is the promise of a magical moment, suspended beyond time. Then, make way for the Sierra Nevada, this immense mountain range, majestic and white. On the eastern side, you can be thrilled by the landscapes of Mono Lake, a lunar and desert world with its snow-covered mountains in the background. A bucolic break that precedes the slopes of Mammoth Lakes and its famous Ski Museum, where the legendary history of the resort is retraced. Finally, on the western side, the Yosemite Park glacial valley, whose incredible natural monuments have made it a mecca for American tourism. So, enjoy your trip! 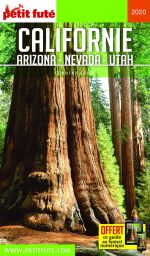 Top 12 most beautiful national parks to visit in the US

While a trip to the United States often takes travelers to one of its iconic megacities, it should not be forgotten that ... Read the article

A trip to an American city always has something special. It's an opportunity to stroll between the tallest skyscrapers, ... Read the article

10 incredible landscapes that don't seem to come from our planet

The land offers landscapes of breathtaking beauty. And some of them look like they're straight out of a science fiction ... Read the article