Flaubert 21 : escapade in Seine-Maritime for the bicentenary of the birth of Flaubert

2021 is the bicentenary of the birth of the writer Gustave Flaubert. And the Department of Seine-Maritime is commemorating this anniversary with an exceptional year. A major writer of the 19th century, his life and work are intimately linked to the region he described so well in his novels, from the Côte d'Albâtre to the Seine, via the Cauchoise or Brayonne countryside. It is to pay tribute to him that the 2021 departmental cultural programme is entirely dedicated to him, with a large number of events highlighting the author whose fame is international, and whose works have been translated into many languages. So when you're on the go, don't forget to check the Flaubert 21 event calendar to see an exhibition, a show, take part in a symposium, a writing workshop, a gastronomic event or even a tourist trail. A whole series of highlights that will help to raise the profile of the Seine-Maritime region, and will make you want to discover or rediscover Flaubert and his strong link with his native land

Flaubert and Normandy: the story of a life

Gustave Flaubert and Normandy is a very long story. The story of a life, but also that of a prestigious literary work. The writer was born in Rouen in 1821, died in Croisset in 1880 and is now buried in the monumental cemetery of his native town. He did make a few detours during his life to the capital and the Orient, but it was in his beloved Normandy that he spent most of his time. In his Norman residence in Canteleu, overlooking the Seine, he wrote all his works, which also regularly evoked Normandy. The action of his best-known novel, Madame Bovary, moves from the Pays de Caux to the Pays de Bray. In Un cœur simple, he takes Pont-l'Évêque, his mother's land, as his setting. The inspiration of Normandy for his writing will last until the end of his life since his last unfinished work, Bouvard et Pécuchet, is set in Calvados.

Flaubert also left many traces in the material heritage of Normandy. Thus, during a stroll in the Normandy region, and particularly in Seine-Maritime, one regularly comes across statues and commemorative plaques. Books and manuscripts are also kept in some public libraries.

A major event to celebrate the bicentenary of Flaubert's birth

Flaubert left such a mark on the history of Normandy that the bicentenary of his birth was well worth holding a major event, which the Department of Seine-Maritime is proud to highlight through an exceptional cultural year. Chaired by Isabelle Huppert, whose remarkable performance as Madame Bovary in Claude Chabrol's film of the same name in 1991 is well known, Flaubert 21 offers a wide variety of events to the public of Normandy and to all visitors.

At the Maison Marrou (29 rue Verte) and at the Rouen Opera House, the exhibition "Madame rêve en Bovary" offers an immersive journey and a contemporary interpretation of Gustave Flaubert's major work. It is an exhibition "outside the walls" of the Museum of Norman Traditions and Arts-Château de Martainville.

In the prestigious setting of Jumièges Abbey, the exhibition "Visiting Pompeii - Claudio Sabatino in the footsteps of Gustave Flaubert", takes visitors to the heart of a dialogue between the Pompeii visited by Flaubert, which he describes in "Voyage en Orient", and the site visible today, as shown in the photographic series by the contemporary photographer. The Orient will also be the subject of the exhibition "Voyage(s) en Orient - voyages de Normands au XIXe siècle" at the Victor Hugo Museum in Rives-en-Seine, an opportunity this time to follow the reflections and musings of several Norman personalities on this part of the world, including Gustave Flaubert and Victor Hugo, through their texts, drawings and correspondence. And then in the sublime gardens of Saint-Georges Abbey in Saint-Martin-de-Boscherville, you should not miss the exhibition "Flaubert, between here and elsewhere". Extracts from the text, with a particular care and a superb setting of the typography, invite the public to follow the back and forth of the author's gaze between the landscapes of his travels in Brittany, in the Mediterranean, and those of his native Normandy.

In Clères, the pretty English park offers the exhibition "Loulou et cie", which focuses on parrots, endangered animals that inspired Flaubert. In a completely different register, "Flaubert and archaeology" is an exhibition held in the historical setting of the Roman Theatre of Lillebonne, and which allows a better understanding of how ancient ruins were perceived in the writer's time.

Normandy being famous for its generous gastronomy, do not miss the operation "À table avec Flaubert", where many restaurants of Seine-Maritime propose dishes and menus under the Flaubert theme. The establishments are also grouped together on a dedicated application, and for each person who has tasted one or more dishes with the Flaubert logo, a "à table" pass will be issued. The pass will entitle the holder to one free entry for one paid entry to the departmental sites and museums throughout 2021.

Other highlights include "Lire à la plage... avec Flaubert", where summer mini-libraries will be set up on 13 beaches in Seine-Maritime and will put Flaubert in the spotlight! In the autumn, the literary festival "Terres de Paroles" will offer a chance to meet the famous Norman author, with a number of live performances that will take spectators along the Seine, from Rouen to Lillebonne, but also in the Dieppe-Maritime agglomeration.

For more information on the events celebrating the bicentenary of Gustave Flaubert's birth, visit the Flaubert 21 website 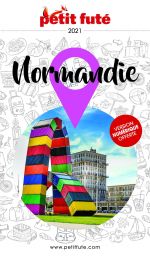 The Vire valley, between the D-Day landing beaches and the Mont-Saint-Michel

Discover landscapes that are often unknown, hidden treasures, places that will not leave you indifferent, towns that ...

Normandy: a land of welcome for water sports enthusiasts

With 600 km of coastline, Normandy is an ideal area for those who like to enjoy activities on the water, especially at ...

What if a stay in the beautiful region of Normandy was an opportunity to take care of yourself? Forget the stress of ...