Normandy, a stroll in the footsteps of Impressionism

Few regions can flatter themselves for having so many aspects. Finally reunited, after more than forty years of separation into two small entities, Normandy is multiple, rich in its landscapes, its history and its projects. Tumultuous at Cap de la Hague, serene along the meanders of the Seine, strangely cut out on the heights of its former massifs, peaceful in its bocage, thermal baths at Bagnoles de l'Orne, chic at Deauville, original at Le Havre, full of history at Rouen, seaside resort at Granville, the region presents a thousand faces. And quickly became the paradise of the impressionists in the 19th century.

Normandy, an essential region in the history of art

Normandy has always charmed painters: in 1763, Joseph Vernet carried out preparatory studies for The City and Port of Dieppe; in 1778, Jules Noël completed a Vue d'Étretat... The exceptional light due to the presence of sea winds, always quick to chase away the clouds, attracted artists... However, it is through Impressionism that the region became an essential milestone in the history of art. Impressionism was indeed born here with Monet, or rather with his canvas Impression Soleil levant (1872), a painting of Le Havre where the painter spent his childhood. It was on seeing this masterpiece that a critic, Louis Leroy, called Monet an impressionist, a criticism that was negative at the time. The term remained, but this time in the sense of a pictorial movement recognized throughout the world. Impressionism is above all a search common to several painters. It is a question of expressing nature (and more particularly landscapes) in what it has of moving, of transitory. Technically, this approach translates into the fragmentation and juxtaposition of primary colours and their complements, processes that aim to produce " vibrations colorées  ". A number of painters have joined this movement, while Monet, the instigator, has gradually moved away from it.

The victory of landscape

Strange as it may seem, it was through an Englishman that Impressionism arrived in the region! By the 19th century, painting had become the leading art form in France. This century marked the victory of landscape over history painting. Eugène Isabey was the first to arrive in this land of light. As a landscape painter in love with the sea, he painted on the still deserted coasts. In 1825, he set up his easel at Le Tréport and presented a View of the Normandy coast at the Salon in 1831. He had a direct influence on Boudin and was certainly one of the important links between the landscape school of 1830 and Impressionism. Turner (an English painter) was in Normandy in 1821 and pencilled in his notebooks of views of Caen, Bayeux, Isigny, Coutances, Granville and Mont-Saint-Michel. In 1832, he went up the Seine and painted four views of Rouen. It was his work on light and atmosphere that paved the way for the Impressionists. So there he is, the Englishman! But a Norman has his importance in this mouvement : Eugène Boudin. Born in Honfleur in 1824, he goes to Le Havre in 1835, meets Monet, invites him to paint with him and above all pushes him to paint outside, in direct relation with the landscape in order to get all the impression out of it. Monet always said that he became a painter thanks to Boudin. After studying in Paris, he discovered Turner in 1871 and it was this discovery that would influence his painting. In 1872 the term impressionism was coined to describe this movement. Impressionism gave birth to a second movement, Fauvism. This time, it is Raoul Dufy who will be the investigator

Museums not to be missed

In Honfleur, you should not miss the Eugène Boudin museum. The visit, free or audio-guided, revolves around several themes, the main one being, of course, Eugène Boudin himself and the painters of the 19th century. The paintings, evolving from Isabey's dark romanticism to Monet's luminous brightness, evoke the atmosphere of meetings at the Saint-Siméon inn, located not far from Honfleur, where artists came to find the light of Norman skies, water and gardens. Eugène Boudin's works are surrounded by those of his friends painters: Monet, Dubourg, Courbet, Jongkind to name but a few. Two areas present the 92 works of Eugène Boudin (paintings and drawings) currently kept here. In one are grouped the pastels, skies, views of Honfleur, scenes at the Saint-Siméon inn. In the other, oil paintings, beaches, portraits, landscapes and seascapes. Others can be admired at the André Malraux (MuMa) museum in Le Havre. Other rooms offer a journey through more contemporary painting, devoted to 20th century artists who lived or worked in Honfleur and Normandy: Vallotton, Marais, Dufy, Marquet, Cappiello and painters of the Rouen school

The Fine Arts Museum of Rouen is also not to be missed. It was in 1888 that the complex, designed by the architect Louis Sauvageot, opened its doors. The Museum of Fine Arts houses one of the most prestigious public collections in France. But it is the richness of the 19th century collection that distinguishes the museum: Géricault, Delacroix, Corot, Gustave Moreau, Degas and Monet, whose work can be admired on the Portal of Rouen Cathedral, as part of France's first Impressionist collection in the provinces.

Giverny is a small village known and recognized thanks to the painter Claude Monet, who lived there from 1883 until his death in 1926. Situated on a hillside and a stone's throw from the Seine, the village offers beautiful walks in the hills, but also in the main street where hotels, restaurants, beautiful residences, shops, artist's studios, the museum of Impressionism and the Claude Monet Foundation mingle. The first is one of the most beautiful museums in Normandy, which offers, through temporary exhibitions, original masterpieces by the great masters of Impressionism: Pierre Bonnard, Edgar Degas, Claude Monet, Auguste Renoir... It is interested in the Impressionists, but also in their precursors and their heirs, from the end of the 19th century to the present day

The Claude Monet Foundation was bequeathed to the Academy of Fine Arts in 1966 by the painter's son. The house with its pink plaster has undergone major renovations. Admire the famous collection of Japanese prints in the artist's home and immerse yourself in Monet's daily life as you walk through the rooms. In the garden, let yourself be swept away by the scents and colours of the different floral varieties along the pathways. As you walk through the rose gardens and go underground, you will come across the Water Garden formed by a Japanese bridge, wisteria and azaleas. This place gave birth to the famous work Les Nymphéas. Finish your visit by the artist's studio which now houses a shop. The Foundation offers many events throughout the year and also welcomes groups and schoolchildren. This temple of impressionism is the second most visited Norman site. And rightly so!

When? You can go there all year round, although the arrival of fine weather is more pleasant. September is a good month to enjoy the sun, away from the summer crowds

Getting there. By train, plane or car, everything is possible.

Useful. To best prepare for his Norman escapade. 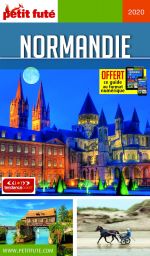 Deauville is the Norman charm, that " petit some chose " that leaves no one indifférent ! The wild character of ...

Mont-Saint-Michel has been there for centuries, grandiose, marvellous, magical in the silver of the evening, haloed by ...
Read the article

The Pays de Caux is full of small, intimate places, as well as towns and seaside resorts where you can discover the ...
Read the article

From a natural and historical point of view, Normandy has a unique heritage. The remains of the D-Day landings abound ...
Read the article
Review