Often mistakenly placed in the Mediterranean, probably by analogy with their cousins the Balearic Islands, the Canary Islands are actually located several hundred kilometers west of the Moroccan coast, a latitude that guarantees crystal clear water and temperatures in summer and throughout the year. The two main islands, Gran Canaria and Tenerife, have long been known as the specialists in all-inclusive vacations with their toes in the air. However, it would be a pity to limit one's vacations in the Canaries to hotels with large swimming pools. These Spanish islands which fill our farniente stays are endowed with varied landscapes. Tenerife, for example, is home to the majestic Teid, a volcano with a lunar landscape and an excellent spot for stargazing. More wild, their neighbors each have their specialties: La Gomera impresses with its lush vegetation and offers us beautiful walks in its pine forests and its black sand beaches. La Palma, with its heavenly coves where swimming is so pleasant and its recent volcanic activity. Fuerteventura with its large expanses of fine sand and turquoise waters promises an unforgettable trip. El Hierro with its unsuspected geological formations where you can try diving and Lanzarotte with its waves and folklore. And finally, Gran Canaria, with its divine sand dunes! Many tropical activities are offered including many water sports such as scuba diving. You can also go to meet whales and dolphins that also enjoy the warm waters of the archipelago. This tourist guide will allow you to draw the canvas of your trip there. It is impossible to talk about the Canary Islands without mentioning their gastronomy: fish, seafood and tapas are the basis of most of the typical dishes, but it is the papas arrugadas, small seasoned potatoes, perfect for a good meal during a family trip.

What to see, what to do Canary Islands? 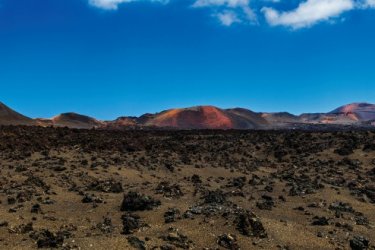 What to visit Canary Islands ?

When to go Canary Islands ?

In the Canary Islands, there is no off-season as such, as the weather is fine all year round and temperatures range between 20 and 30°C. The high tourist season is summer, from May to October, with peaks in July and August. Gran Canaria, Fuerteventura and Lanzarote are fully booked in summer due to the beautiful beaches that these islands offer. Tenerife, La Palma, La Gomera and El Hierro are rarely visited and will delight those who are looking for more tranquility. The best time to leave is, without a doubt, from November to April, because when our landscapes catch a cold, those of the Canary Islands are still basking in the sun. And it is also the occasion for many Spanish and international families to go on a trip during the Easter holidays or to see the carnival in the sun! However, accommodation is more expensive during December, January and February.

Due to the Covid-19 pandemic, entry and travel restrictions may apply Canary Islands. Remember to visit the site of the Ministry of Foreign Affairs before you leave for the latest information
Practical information for travel Canary Islands
Formalities Budget Horaires Getting around Gastronomy

A one week stay in the Canary Islands allows you to discover some of the essential points of the islands of Tenerife and Gran Canaria. To set off on an assault on the Teide, the highest point in Spain, to plunge into the streets of La Laguna, whose layout has inspired South American cities. Before getting to know the Guanche heritage of Gran Canaria, in the Risco Caído d'Artenara and in the "sacred mountains" that enamel it. All of them listed as UNESCO cultural or natural heritage. In two weeks, your steps will also take you to La Gomera, to enjoy the Garajonay Park, the largest laurel forest in the Canary Islands and the charm of San Sebastián de la Gomera or Hermigua. You will continue to the beautiful beaches of Corralejo, in Fuerteventura, in the natural pools of El Hierro and get as close as possible to the volcanoes of the Timanfaya Park, in Lanzarote or the Caldera de Taburiente, in La Palma

The Canary Islands in one week

Two weeks of visit to the Canary Islands

How to go Canary Islands

The Canary Islands are very safe and modern islands, so travelling alone does not pose any particular difficulty. In addition, the diversity of the offer in transport, accommodation and activities will allow you to build the trip that suits you. However, make sure to book transport and accommodation in advance during the high season to avoid surprises

The Canary Islands offer both all-inclusive trips to hotel complexes with tailor-made activities and excursions and theme trips, especially for hikers and volcano lovers. Stays last from 10 days to three weeks and generally include visits to two islands, or even three for the more ambitious ones.

You must inevitably take a boat or plane to travel between the islands. The price and time of the trips are very variable, but between very distant islands, we recommend flying, a little more expensive but very fast. On the other hand, if you do flea jumps, the boat is much more practical. On the islands, renting a car remains a good solution but buses also exist and serve many destinations.

Las Palmas de Gran Canaria, an Atlantic city with over 500 years of history

Fly from Lille, Toulouse and Marseille to Gran Canaria!

These winds blow from east to west and have a decisive influence on the climate and vegetation of the Canary Islands. They always push the clouds in the same direction, and the clouds are blocked by the mountains. Their passage makes the Canary Islands an ideal destination for all kinds of board sports, windsurfing, paragliding and kitesurfing, etc

Nicknamed the miraculous plant, silent healer, Doctor of Paradise or elixir of longevity, it is a plant known for its cosmetic action on the epidermis and its nourishing properties. You will find it everywhere, markets, souvenir shops or at the supermarket. Available in sun oil, shampoo, shower gel or fruit juice

The barraquito is a very sweet latte that is only drunk in the Canary Islands. But on all the islands and often. It is traditionally served in a small glass, with multiple herbal liqueur, lemon, cinnamon, but the vast majority of bars and cafés will serve it simply with a good dose of condensed milk

In the Canary Islands, this festival is as important as in Brazil. With the one in Santa Cruz de Tenerife, but which also takes place on the islands of La Palma, in Santa Cruz de La Palma, and Gran Canaria in its capital, Las Palmas. Festivities that end with the traditional burial of the sardine, which is burned around a good table

For the writer Manuel Vázquez Montalbán, a puros smoker now before the eternal, some Canarian puros were quite equivalent to those of Cuba. Nothing strange since since since the 19th century the Canarian immigrants to Cuba have brought this unique know-how to the country. To be discovered in particular on the small market of La Palma or in shops

Their fights are officially forbidden, but they still exist clandestinely. In 2017, the Canary Islands government introduced a bill to ban them more effectively than the 1991 law, which triggered strong protests, particularly on the island of La Palma, which has the largest number of associations in this area

Of sand or lava, these islands abound in desert expanses. It is in the heart of the Teide Park in Tenerife and Timanfaya Park in Lanzarote that the volcanic deserts are the most spectacular. Lava flows draw breathtaking lunar landscapes. In Fuerteventura and Gran Canaria you can admire sand dunes as far as the eye can see

You will be surprised by the presence of big lizards in the rocks. The Blue-throated Lizard is a beautiful endemic species that is often seen. And what about the presence of geckos, or salamanders, the nocturnal reptiles that enter homes to hunt all kinds of insects, which are considered commonplace if not desired

It is an ancestral native sport still rooted in the local culture. Two teams of twelve wrestlers compete in the matches. However, the bregas (matches) only pit two wrestlers against each other. In a 10-metre circle covered with sand, the player who puts his opponent to the ground twice in less than three minutes wins the game

It is a great local Canarian production, especially in La Palma, Aldea rum, and in Gran Canaria, honey rum, and is drunk as an aperitif as well as a digestive. It has its origin in a plant, the sugar cane. The sap ferments for several months to turn into alcohol. After distillation, we obtain a cane brandy, rum

Used for centuries, this whistling language of the Gomeros allowed the inhabitants of this steep island to talk to each other, from one valley to another. Roads and new means of communication have contributed to the decline of the silbo, but it still persists in some parts of the island and has been listed as a UNESCO intangible heritage site since 2009

The Canary Islands were born of significant seismic activity in this region. The best known is that of Teide, in Tenerife. The last eruption was the eruption of Teneguía, in La Palma in 1971. El Hierro was the object of an underwater volcanic eruption on 12 October 2011, off the coast of La Restinga. With a main cone 120 meters below the sea

You will really be Canarian if you are familiar with your interlocutors, even if you have only known them for a short time. The use of the familiar form of address is part of the customs. Eventually, use usted and let your interlocutors specify that they wish to switch to familiarization.

You will learn that the royal family is respected and appreciated there, so avoid making a republican mockery of it. There's also no need to rage against religion. Festivals, often religious, have strong identity connotations and are experienced as cultural heritage.

If politics arises in the conversation, let the resentment against the central power that ignores the islands and against the morgue of the godos, the Spaniards against the Canarians, be expressed.

Also avoid talking about the traditional rivalry between Tenerife and Gran Canaria, about which you know little and which officially does not exist.

Finally, you will have in heart to talk about the guagua and not the bus and of course to respect the environment of these islands.