A small paradise in the Indian Ocean and a playground for hikers, Reunion Island is a jewel a few hours flight from the metropolis. A mixture of colours and scents, the one we call "the intense island" is a marvel for the five senses. The eyes never tire of admiring the waves of the coral reef crashing into the sand in the varied colours of the beaches of the Hermitage, Saint-Pierre, Grande-Anse or Boucan-Canot, while the rhythm of the Sega and the intensity of the Maloya, the ancient song of the slaves, rock your ears. The tourist guide of Reunion Island takes you along the coast where the markets go up every day to offer the traveller's taste buds the chance to taste the countless exotic fruits and vegetables of which one trip will not be enough to discover: guava, pitaya, chouchou, longani or even the letchi which makes the joy of the Reunionese every summer. The sun heats up and the skin revels in the freshness of the waterfalls of Salazie, Langevin or Saint-Benoît. Finally, along the coasts, the intoxicating smell of frangipani titillates the nostrils and finishes capsizing the hearts. From beaches to mountain peaks, Reunion Island is steeped in dramatic landscapes, including the highest peak, the Piton des Neiges, which rises to an altitude of 3,070 m and is undoubtedly the best place to observe the sunrise over the sea in the East or its setting in the West. From there, above the sea of clouds, points the summit of the Piton de la Fournaise, whose eruptions are the delight of the luckiest travellers.

What to see, what to do Réunion? 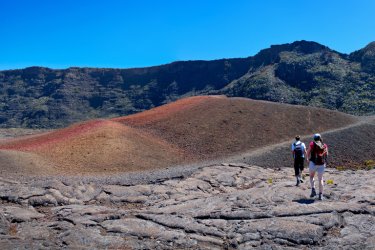 What to visit Réunion ?

When to go Réunion ?

The high tourist season extends from October to April, at least for Metropolitans who come to Reunion Island for the sun when it is cold at home. But there are also the school holidays of the Reunionese, who fill planes and hotels and raise prices, especially from 20 December to the end of January and from mid-July to mid-August. These two cumulative effects make the period from the beginning of November to the end of January the period when booking is most imperative for any accommodation, car or plane, because otherwise it remains only the most expensive

Namely that a New Year's Eve in Reunion Island is an unforgettable moment, to be celebrated on the beaches of the West Coast.

Due to the Covid-19 pandemic, entry and travel restrictions may apply Réunion. Remember to visit the site of the Ministry of Foreign Affairs before you leave for the latest information
Practical information for travel Réunion
Formalities Budget Horaires Getting around Gastronomy
From the inevitable cirques to the volcano, through the many gullies that slope down to the beaches, there is no shortage of ideas. So to fully enjoy the island, get up at dawn, when the cockerel starts to ruffle its feathers. Clear skies will be yours. And don't forget that booking is the key word of your stay. From accommodation to the restaurant, without forgetting your activities, it is strongly advised to book in advance, especially on weekends. The tourist offices will be good advice to build your stay according to your desires. And above all, they will be able to give you the little tips you need to know.
The intense island will surprise you! So be as vigilant! Between the currents, which can be very powerful, and the waterways, which can swell in a few minutes, remember that nature can be unpredictable all year round. Be smart!

The unmissable of Reunion Island

The tour of the island in two weeks

How to go Réunion

Reunion Island does not present any difficulties for independent travellers. Hotels and restaurants are extremely varied and operate as in metropolitan France. In the same way, travel is easy and the locals are happy to offer their help in case of difficulty. Hiking enthusiasts should ensure that they monitor weather forecasts and report their intentions if they are travelling alone

Many tour operators offer thematic tours: hiking, culture, beaches, volcanoes. The stays generally last between 10 and 15 days and give you a very nice overview of the island and its richness. Stays are sometimes offered with an excursion to the neighbouring islands: Mayotte, Mauritius, Rodrigues or Madagascar.

By bus. The yellow bus network serves most of the island, and sometimes combines with other more localized companies. Anyway, any destination is reachable for a few euros

In the car. It is the means of transport that gives you the most freedom and will allow you to access hiking departures. There are many car rental companies but in high season it is better to book well in advance to avoid surprises.

Fascinating island-department nestled in the heart of the Indian Ocean, Reunion can be discovered and learned between the lines of its history, on the pages of a guidebook, in the tales and legends of its inhabitants, on the paths of one of its innumerable hikes or in the hollow of its turquoise waves, but above all in the course of renewed journeys towards its green cliffs. For if Reunion has a talent, it is above all that of bewitching the traveller and of revealing itself only little by little, over the course of encounters and stopovers. Born of crossbreeding, Reunion has shaped its population and its landscapes by joining men and nature from the four corners of the world: China, Malaysia, India, Mozambique, Madagascar, Portugal, France and many others. A richness that makes this precious island unmissable as well as unforgettable. However, its geographical situation and its growing population require it to constantly take up new challenges.

With its long legs, this harmless spider(Heteropoda venatoria), typical of the islands of the Indian Ocean, gives goose bumps to those who cross it. Its body measures 2.2 to 2.8 cm and its legs can extend up to 12 cm. It does not weave its web, but slips into every nook and cranny of the hut and surprises with its great leaps.

You'll see a lot of traffic! On one side these meat bites wrapped in a flour paste, a local specialty of Chinese inspiration steamed, available in all bar trucks. On the other side, the corks... trucker's corks. The rush-hour traffic jams will give you time to enjoy the sea view.

A reference dish in the local gastronomy, this speciality is composed of a base of white rice, accompanied by meat, fish, seafood or other foods, simmered with onions, tomatoes, garlic, ginger and turmeric. It is accompanied by 'grains', i.e. pulses such as Cape peas, white beans or lentils, and sometimes also 'brevas'.

The Reunionese take a malicious pleasure in mocking, teasing and making fun of each other, in short, in moukater. If these verbal acrobatics are generally fair game, moukatage spares no one. The island is small and rumours circulate at full speed on the ladilafé (gossip). An island's hobby: everything is known.

In geological terms, the cirque is a basin formed by the subsidence of a mountain. There are three cirques in Reunion Island: Cilaos, Mafate and Salazie. In the heart of the island, protected by ramparts more than 1 000 m high, they are only connected to the outside world by a river, embedded in gorges. Real worlds apart!

Designating a language, a people and a culture, Creole is the very identity of the island. Speaking Creole is the first change of scenery that a tourist encounters. An imprecise mixture, so deeply rooted in the customs, Reunion Island's creolity is perpetually enriched by the specificities of the people who live there.

The dodo is a large bird that has been extinct for many years. There were some in Mauritius, and perhaps also in Reunion Island, although this has never been scientifically proven. In any case, this is what the legend has always wanted, to the point that today the dodo is one of the emblems of the island, and especially of the local beer, the Bourbon brand.

It's not you who takes a nap under the filaos after a good picnic, but a reptile, the best known of which is the panther chameleon. Originally from Madagascar, it has populated the island with its colourful colours, but it is nowadays very threatened. Its extreme slowness makes it vulnerable to cars and predators.

Named so because of its long tail, this white bird of the South Seas, spotted with black lines, is the emblem of Reunion Island, even if it is curiously not an endemic species of the island. You will be able to observe it along the cliffs of Reunion Island, or near the gullies, between two fishing parties where it attacks small sea fishes.

A gully is a natural geomorphological and hydrogeological formation created by water runoff that you will find everywhere on the island. They bear the names of historical characters, animals that are fished there, or are the mark of a romantic or dramatic story. They have a lot to tell you and bring you to life.

Zamal is a much sought-after herb that grows in the shade of prying eyes. Probably arrived with the engaged ones in the XIXth century, the plant acclimatized very well in Reunion Island and replaces cannabis today. Do not forget that it is, of course, forbidden and that the penalties incurred are the same as in France.

Zoreil is the name given to people from France, whether they are tourists or long-term residents. Legends say that the outstretched ear of the metro that does not understand Creole turns red in the sun or that the punishment that the foremen reserved for chestnuts was to cut off the ear.

You always ask for rougail in your career. Margoze, lemon, cucumber, tomato... any quality as long as it's good enough.

You cook your rice in the pot. Because you can't cook rice in sachets.

Grandma Kall is the witch in the stories you tell your children.

Or gain koz kreol. Or at least you don't listen every time someone speaks Creole to you.

Christmas evokes for you the red of lychees and flaming lychees rather than the old man's habit.

You know the best spot to observe the green ray at sunset.

Two-finger savate is your preferred means of locomotion.

Walking with greenchilli peppers in your pocket is part of your daily routine.

Your car is polished every day in front of the TV in your living room.

You take the cast iron kettle with you on all your trips, to the beach or the mountains.