Taking a trip to Iceland is the guarantee of a permanent change of scenery. Here, all the elements come together or clash to create incredible paintings, unique, varied and unexpected landscapes where you can admire in a single day an iceberg, a fjord, then a volcano or a geyser and swim in the famous Blue Lagoon. Thus, the weather changes every five minutes - the skies multiply the special effects: incredible clouds, unexpected lights, intersecting or overlapping rainbows, northern lights. Rather young, the Icelandic population is also on the move, which translates into a tremendous creative and festive energy... A simple Friday evening in Reykjavík will be enough to convince you. Certainly, the idea of spending the summer (not to mention winter) around the Arctic Circle can put some people off... But in Iceland, 15°C does not have the same value as elsewhere. Following the instructions of the Icelandic tourist guide, you will discover a unique and multifaceted region, both in terms of its exceptional nature - as evidenced by the double falls of the Gullfoss - and its unique culture in the Nordic countries.

What to see, what to do Iceland? 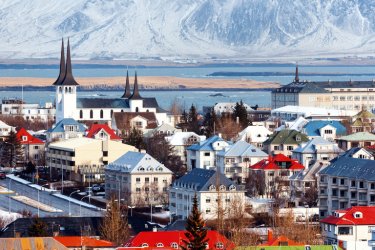 What to visit Iceland ?

When to go Iceland ?

Iceland's high tourist season extends from June to August, when the climate is temperate and pleasant with long, sunny days. In May, between September and October, it is the low tourist season. More and more people are visiting the country and enjoying the benefits of the "off-season". Temperatures remain mild although always unpredictable. While campsites are closed, most guesthouses and hotels are open and more and more restaurants are opening. Bus lines do not operate regularly, but with a car rental, you can enjoy all the beauty of the countryside and travel almost everywhere without much difficulty. Between November and February, Iceland is reserved for those who are not afraid of difficult road conditions and cold weather because extreme weather conditions are sometimes harsh in the highlands. However, it should be noted that the country is developing its winter tourism and attracting a new clientele interested in winter sports (skiing, snowboarding, sledding, snowshoeing, etc.) or in observing the northern lights. The seasonality of tourism is therefore gradually fading.

Due to the Covid-19 pandemic, entry and travel restrictions may apply Iceland. Remember to visit the site of the Ministry of Foreign Affairs before you leave for the latest information
Practical information for travel Iceland
Formalities Budget Horaires Getting around Gastronomy

Your stay in Iceland will depend a lot on your means of transport, in other words your budget. If you rent a car, you will have a lot of freedom to drive around the island, but you will not be able to "penetrate" it, as the central desert is reserved for 4X4. If you depend on buses, you will need more time to travel around the country. But the good news is that buses can get you to all parts of the island during the summer months. To visit the whole island and travel for several weeks, you will need a 4x4.

How long should I stay in Iceland?

In general, we recommend a minimum stay of 2 to 3 days to enjoy Iceland and see enough. To tour the island, we recommend two to three weeks. It will depend on your itinerary and if you really want to go into the Highlands for example.

How to go Iceland

Well served, Iceland is an extremely safe country with one of the lowest crime rates in the world. The only potential dangers are related to alcoholism during the evenings that are watered in the capital, on Friday and Saturday evenings. The other instructions that can be given are those related to a sometimes dangerous nature, so there are risks of injury when hiking and it is safer to be accompanied by a guide.

Iceland can be discovered in a 4 to 8 day tour, mainly by car. Iceland being a very expensive country, it may be more profitable to favour tours over autonomous trips in order to better budget your stay. However, it is necessary to study carefully the different offers of tour operators and make sure that there are not too many additional costs because in Iceland this can quickly increase the bill!

Flying is a means of transport widely used by Icelanders in the interior of the country. During the winter, when the roads are unusable, flying is the only real means of transport in Iceland. There are also various ferry lines in Reykjavík-Viðey, Stykkkishólmur-Flatey-Brjánslaekur, etc. Icelandic buses, often 4x4, are comfortable and reasonably priced. Please note: the price of car rentals is quite high.

guide to the RV adventure in Iceland!

The 10 best road trips to do in Europe

The creation of Iceland goes back to 15 million years, but regularly, Mother Nature proves that she has not said her last word! Between the eruption of Eyjafjallajökull in 2010 and the one that started at the end of February 2021 near Fagradalsfjall, volcanism is still shaping Iceland's landscapes

A land of fire and ice, Iceland's popularity as a tourist destination has only increased in recent years. Between its breathtaking landscapes, its natural phenomena or its very particular Nordic culture, Iceland fascinates. Its wild and exotic character still pleases more and more. But what is the soul of this country? From the way of life of the locals to its most beautiful treasures, embark on a journey to an island that will surprise you. Marvel at and learn about the Northern Lights, learn about the history of this island with its unique parliamentary system, and discover its wonders.

This natural phenomenon is the result of the rubbing of the solar winds against the earth's atmosphere. The result is a fabulous spectacle to be admired as soon as night falls and under clear skies, from the end of August to the beginning of April. The best time to observe the Northern Lights is from October to March, between 8pm and 2am.

One of the most famous lagoons in Iceland is the Blue Lagoon, which has become very popular in recent years. Located near the Svartsengi geothermal power plant, not far from Grindavík, it offers turquoise water with a temperature of around 39°C. The pleasure of bathing in naturally warm, milky water is immense.

Volcanic eruptions, both explosive and effusive, are the source of most of Iceland's craters. On the Laki fault, it is possible to discover a row of no less than 115 craters. Testimony of a catastrophe, that of the eruption of Laki in 1783-1784, this alignment forms one of the many tourist places of Iceland.

Some travelers decide to tour Iceland simply to see the multitude of abandoned farms that are found there. Several of them have been converted into museums, while others remain uninhabited. You can even stay there! Of course, there is a plethora of farms dedicated to breeding.

With the largest glacier in Europe, Iceland has well earned its name "land of ice". One eighth of its surface is indeed covered by glaciers which in some places reach a thickness of nearly 1,200 m. But global warming is not far off... The ice is also a great place for many sporting activities

If Iceland is known for its ceramics, it is even more famous for its woollens (the famous Icelandic sweater), knitwear and other textile productions with geometric jacquard patterns. The oldest Icelandic knitting patterns date back to the last quarter of the 16th century. They were even exported to northern Europe in the Middle Ages

The Icelandic economy is based primarily on fishing and its by-products. Reykjavík, Akureyri, Grindavík and Heimaey are among the main ports of the country. But there are still dozens of small localities where fishing is done by hand. Thus, in the fjords of the East is a charming fishing village, located in a grandiose decoration, Djúpivogur.

When the skies darken, the streets of Reykjavík remain alive, giving young people the opportunity to enjoy themselves in nightclubs. And these traditional weekend nights have a name: runtur. The streets are packed with people shouting, singing and drinking. It seems as if a hurricane has passed by...

You will inevitably be confronted with the smell of sulphur during your trip. Near Geysir, for example, solfataras let out water vapor mixed with hydrogen sulfide. The sulphur even gets into the water you use (you'll notice it when you take a shower), but it is not dangerous

Elves are part of Icelandic mythology, strongly rooted in the imagination of a population very fond of the Huldufolk ("hidden people") legends. Among the local legends, there are also often so-called haunted places (some of which are mentioned in the guidebook), and trolls behind certain rock formations.

The sagas contain many stories of famous Viking heroes. This name was given to the Scandinavian navigators who crossed the seas from the end of the 8th to the beginning of the 11th century. During this period, they also developed a real art by elaborating wood carvings, fabrics and hangings, but also goldsmith's art

As a "hot spot", i.e. located at the boundaries of tectonic plates, Iceland has increased volcanism which shapes the country. The most active volcanoes in Iceland are Hekla, Krafla and Grimsvötn. Eyjafjöll and Bárðarbunga are the best known volcanoes, having erupted in 2010 and 2014 respectively

You respect nature, don't drive off the tracks in a vehicle; stay on the trails when hiking in national parks so as not to destroy fragile plant species or disturb animals, some of which are endangered.

Don't let the irresistible urge to swing your foot against small piles of rocks you come across while hiking overwhelm you. These piles of stones (cairns) are used to show travellers the way and are a heritage of Icelandic culture.

You believe in the existence of trolls, elves and other creatures, to which the most Cartesian of us do not give any credibility.

You don't judge the Icelandic way of life by looking at the outside of their house. It is in the interior design that Icelanders prefer to show their personality

In swimming pools , you have no apprehension about washing yourself naked before putting on your swimsuit and entering the water.