Belgium is a land of good cultural, artistic, architectural and gustatory surprises, which a tourist guide to Belgium will try to show. On the shores of the North Sea, we discover the coastline and its memories of the Belle Époque, which transport us through the sweetness of Paul Delvaux's paintings after tasting a grilled sole. Then, we descend to Bruges the Legendary by forking through the Westhoek Natural Park and the cultural and natural sites marked by the First World War. Then it is Ghent and its architectural jewels, its medieval canals, a castle on the water... Before leaving Flanders, it is of course necessary to make a detour to Antwerp and its own identity. Limburg and its mining past will also attract curious visitors to the heart of the mines and Flemish Brabant will seduce beer and brewery lovers. And now Brussels is already showing its snout! Surrealism, Art Nouveau, temple of the comic strip, capital of Europe. Finally, more discreet in its communication but without having less to offer, Wallonia is undoubtedly worth a long visit. Waterloo and its lion's hill, Binche and its world-famous carnival, Namur and its citadel with its great paces, Dinant and its elegant rock... And how not to mention Liège, the ŽCité ArdenteŽ which houses in its heart offbeat artists, divine waffles. Finally, Bastogne and its commemorative sites on the Second World War thrill the Ardennes. Wherever you are in Belgium, the Kingdom promises a holiday without fuss.

What to see, what to do Belgium? 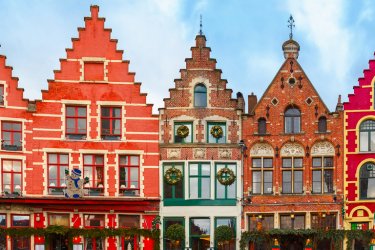 What to visit Belgium ?

When to go Belgium ?

The best time to travel to Belgium is between June and September, when temperatures become more pleasant and rains less frequent. February, for carnivals, and December, for Christmas markets, can also be the subject of a few days getaway. Belgium means folklore and tradition. Be sure to check the dates of the festivities in the cities you are visiting. Some parades sometimes cause heavy traffic jams in transport, such as during carnivals. As a worthy European capital: it is preferable to avoid the car to travel around Brussels on European summit days in particular.

Due to the Covid-19 pandemic, entry and travel restrictions may apply Belgium. Remember to visit the site of the Ministry of Foreign Affairs before you leave for the latest information
Practical information for travel Belgium
Formalities Getting around Gastronomy

If you only have a weekend to discover Belgium, choose to visit a city and its surroundings rather than touring the country as quickly as possible. Belgium is a slow country to visit, and you'll have to pick up the pace. Bruges or Brussels are the most common choices but never disappointing. In Bruges, avoid the high season at all costs, so you can enjoy a warmer and more welcoming city. Antwerp and Ghent have an undeniable urban dynamism, while Namur and Liège have a more popular, festive character. Two weeks is a reasonable amount of time to get a good overview of Belgium, its major cities and its hinterland. Jacques Brel's "Plat Pays" may be a small territory, but there are many points of interest. An alternative to the traditional (and very touristy) Brussels-Bruges route is to do Brussels - Kortrijk - Ghent - Antwerp.

A weekend in Brussels

Discovery of the flat country

How to go Belgium

It is very easy to go alone to Belgium, the transport networks ,road, rail and air being very developed and the means to get there are numerous (plane, train, coach, car...). However, beware of pickpockets in tourist areas and large cities. Remember to book well in advance during the high season...

The offer is diverse and varied to discover Belgium. Discovery of the Belgian countryside, city escapades in Brussels, Bruges or Ghent, romantic and cultural stays, tour on Flemish painters: the possibilities are numerous. The destination lends itself to several types of stay. Given the variety of offers, prices are adapted to small budgets, but also to those who are looking for a charming stay.

As far as air travel is concerned, the distances are so short in Belgium that this mode of transport is unsuitable. But apart from flying, the main transport modes are easily accessible: train, coach, car and bicycle. In large cities, the transport network is so developed that the car is not of much interest

Stay in Walloon Brabant, between heritage and gastronomy

Brussels, the capital that you must discover by bike!

The Walloon regions seem to be very close to those of northern France, in terms of geography, common history, language and gastronomy. The Flemish regions, on the other hand, give the French a real change of scenery. Not only because of the language, but also because of the use of bicycles, a real social phenomenon, and the existence of navigable canals. Belgium has an impressive population density and heritage, but also very different cultures and regional gastronomy. The "Plat Pays" is rich in local beers. All this patchwork can be found in Brussels, the radiant capital of Belgium, as much for its double language, its cosmopolitan identity and culture and its European role, as for its new French song, pop and rap scene.

THE DISTRICTS OF ANTWERP

Very popular at the beginning of the 20th century, Art Nouveau was inspired by natural forms and structures: flowers and plants, but also by their curves, and favoured materials such as glass and steel in the midst of the Industrial Revolution. Belgium has many Art Nouveau houses and buildings, many signed by the master Victor Horta.

Belgium has almost 700 comic book authors. Hergé opened the ball with Tintin and Snowy in 1929. Morris imagines Lucky Luke in 1946. Then André Franquin, draws Spirou in 1947, the Marsupilami in 1952, and Gaston Lagaffe in 1957. Peyo imagines the Smurfs in 1954. Let's add Jean Roba with Boule and Bill in 1959 which precedes the modern comics.

The Belgian belfries, registered with Unesco, are towers supporting bells which in the Middle Ages punctuated the economic and social life of the cities (working hours, lunch break, alarm bells, festivals...). The belfry was also a watchtower in the face of potential dangers and represented the acquired independence of the cities from the feudal regime.

The beguinages date back to the Middle Ages and are listed by UNESCO. Single women met to help each other, without taking vows. However, they lived devoutly and carried out social and medical work. Each beguinage included a dispensary, manufacturing workshops, a church and modest houses.

The gradual reclamation of the land from the 11th century onwards pushed the sea further and further away and dug canals for irrigation and water drainage, which were very convenient for transporting goods to the centre. These can be found in Bruges, but also in Ghent and in the Belgian countryside linking the cities together.

Since the 16th century, Belgium has been renowned for the quality of its handcrafted lace production. Two manufacturing centres share the work: Brussels, which specialises in bobbin lace, and Bruges, which is the capital of the Binche fairy stitch and continuous bobbin lace.

And whether you like football or not, you have to admit that it has one quality: that of bringing Belgians (Flemish, Walloons,...) together around the same ball! The Red Devils played until the semi-finals of the 2018 World Cup against the French team. Thibaut Courtois was elected best goalkeeper in the world by FIFA in 2018.

The Commission and the European Parliament sit in Brussels. Moreover, Belgium is fortunate to be at the crossroads of Latin and Northern European cultures. Its richness is therefore unparalleled: Belgians are very open culturally, and speak English, French, Dutch and German in addition to French and Dutch.

Undoubtedly a little cold, but full of charm with its tides, breakwaters, iodized air and immense sandy beaches. The Belgian coastline, with nearly 70 km of coastline, is part of the childhood of the Belgians, the sand castles decorated with paper flowers and mica windmills; the walks in "cuistax", these pedal vehicles.

With the technique of glazing, this oil painting allows a luminosity, transparency and nuances never seen before in Europe. It depicts the religious, the daily life of the inhabitants. The Mystical Lamb of the Van Eyck brothers in 1432 is the founder of the primitive current, embodied by Memling, Van der Goes, Bosch. Brueghel the Elder and Rubens during the Renaissance followed.

"With cathedrals for unique mountains / And black bell towers as cocagne masts..." Brel sang the Flat Country so well. If Belgium deserves this reputation for its western part (the seaside and its hinterland), on the other hand, Wallonia is much more hilly, especially when you go down towards the Ardennes, in the south-east of the country.

This means of transport is very popular, whether to go to school, to work, to the disco... You will also be surprised by the number of facilities provided for cyclists (bicycle paths, bicycle parking, etc.). Beware if you are by car or on foot: they are the kings of the road.

You say "Once! "as a courtesy to soften the impact of the request. Example: "Come here a little once! means "Would you come here, please?" »

You say the "x" of Brussels "ss" like the "x" of Auxerre, including in the adjective "bruxellois". The 'x' of Brussels derives from the Latin noun Bruxellae, whereas the original name of the city is Brussel in Dutch. You also pronounce the 's' of Antwerp, otherwise no one understands

You order a beer "from the keg " and not "draught". Moreover, you don't order the cheapest "pils", but a beer with character among the triple IPAs, lager, amber, etc.

You ride your bike day and night, rain or shine, rain or shine. You may even have learned to ride before you walk! You know how to find your bike in a parking lot with a thousand two-wheelers on top of each other. You use bike ramps on the stairs