Halfway between the two ends of the mythical Silk Road, the ancient trade route once used by caravans between China and the Mediterranean, Kyrgyzstan is an unusual destination with sumptuous and impassive mountains. Familiar travellers to Central Asia, whether from Kazakhstan or Uzbekistan, will be surprised to discover a country with limited infrastructure, little tourist traffic, and where it is often necessary to travel by horseback if you move away from the few beaten tracks. The Kyrgyzstan tourist guide takes you to the heart of a nomadic and equestrian country, to the assault of the highest peaks in the world, like Khan Tengri, Peak Communism and Peak Lenin, where the inhabitants, speaking only Russian or Kyrgyz, continue to bring to life ancient traditions such as the oulak-tartych, a game of extreme violence in which riders compete for the possession of a goat's decapitated carcass, or even falcon hunting. In the east of the country, near Cholpon-Alta, there is the immense Issyk-Kul Alpine lake and its seaside resorts, while in the west, the Kyrgyz Ferghana Valley, mainly populated by Uzbeks, offers all the treasures of its bazaars, crafts and small mountain villages. A complete destination, in the heart of the Celestial Mountains, where your steps will take you on paths that are still deserted. Yes, the adventure is still possible!

What to visit Kyrgyzstan?

When to go to Kyrgyzstan?

When to go to Kyrgyzstan? The climate is extremely harsh due to the high mountains that cover the whole country, and the tourist season is particularly short. The best time to go to Kyrgyzstan is from July to August. Lake Song-Kul is thawed for less than a month at the bottom of this period. From October to April, snow clutters or blocks roads, makes mountains inaccessible, and all travel tedious and long. If you have no choice but to go away in the winter, take shoes with good insulating soles and warm clothes. The north of the country, between Bishkek and Lake Issyk-Kul remains passable even if it is not uncommon to see 40 cm of snow fall in one night. You can also connect the main cities such as Osh or Naryn, but don't expect to be able to venture into the mountains too much unless accompanied by a specially trained mountain guide. Even if the cold weather in altitude remains severe, the months of May and June as well as the month of September are also periods to consider for those seeking to know when to go to Kyrgyzstan. But in the event of early winter or late spring, some regions can maintain the same difficult conditions as in winter.

Kyrgyzstan's weather is subject to the climate of Central, Continental and Dry Asia. It is very hot in summer, very cold in winter. This character is further accentuated by the country's very high mountains. While, in the summer season, the presence of mountains and glaciers moderates the heat at high altitudes, in Kyrgyzstan, day and night temperature differences remain very large, with thermal amplitude frequently exceeding 30°C.

The national currency is the Kyrgyz som (KGS). Apart from driving, especially 4x4s, to remote places, life in Kyrgyzstan is not expensive. In bazaars or small tchaikhanas, it is very easy to eat for a handful of euros, and accommodation in a local house rarely exceeds 10 or 12 € per person. You will need to take into account the cost of guided hiking or horseback riding in the wilderness areas of Kyrgyzstan

In order to facilitate the country's tourist development, Kyrgyzstan has, since 2012, exempted most European nationals, including the French, Swiss and Belgians, but also Canadians, from the visa requirement for entry into its territory, whether by land or air. A visa is only necessary if you plan to stay more than three months in Kyrgyzstan. Remember to bring your passport for any routine checks.

There is no compulsory vaccination to travel to Kyrgyzstan, all you need is to have your vaccinations up to date. However, vaccination against typhoid fever and viral hepatitis A and B is recommended. Please note that all sanitary facilities in Kyrgyzstan are dilapidated and out of date. Also take into account that, depending on the season in which you travel to the country, getting to a hospital in a large city may not be easy or quick. With these two equations in place, you will have guessed that, if you plan to go off the beaten track and travel without the assistance of a tour operator, it is better to leave with a good travel pharmacy and, possibly, a good insurance. Travel hygiene should certainly not be neglected. In addition, water is not drinkable in Kyrgyzstan's cities

How to go to Kyrgyzstan? Our advice & tips

Although not very popular with tourists, Kyrgyzstan is on the programme of some travel agencies and tour operators specialising in Central Asia. The whole thing will be to find the formula that suits you best: family holidays, hiking holidays, honeymoon, self-drive tours... It is also possible to have a tailor-made tour prepared, depending on what you like, all inclusive (all inclusive) or partially taken care of (combined plane + accommodation, for example).

On the side of large airlines, the average price of a round trip Europe-Bishkek air ticket varies from €600 to €800. That's what you'll find with Turkish Airlines, Aeroflot or Lufthansa. Recently, Pegasus Airlines Asia, Turkish's low-cost subsidiary, also serves Bishkek from Paris via Istanbul at around €500. This will finally bring down the prices of other companies! Remember to buy your tickets six months before departure!

On the aircraft side, the number of domestic routes is limited by the obsolescence of airport infrastructure. All Kyrgyz airlines are blacklisted, except Pegasus Asia. We therefore prefer to take the bus or minibus. Shared taxis are also a quicker and more comfortable way to travel, especially useful for long journeys. On the train side, your only Kyrgyz experience will eventually be on the Moscow-Bishkek line.

Prepare for your trip Kyrgyzstan

Ten days in Uzbekistan and Kyrgyzstan

Ten days in Kyrgyzstan and Tajikistan 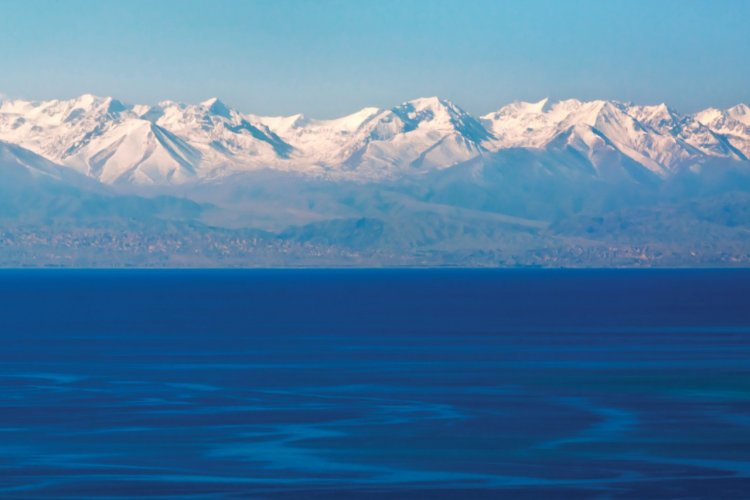 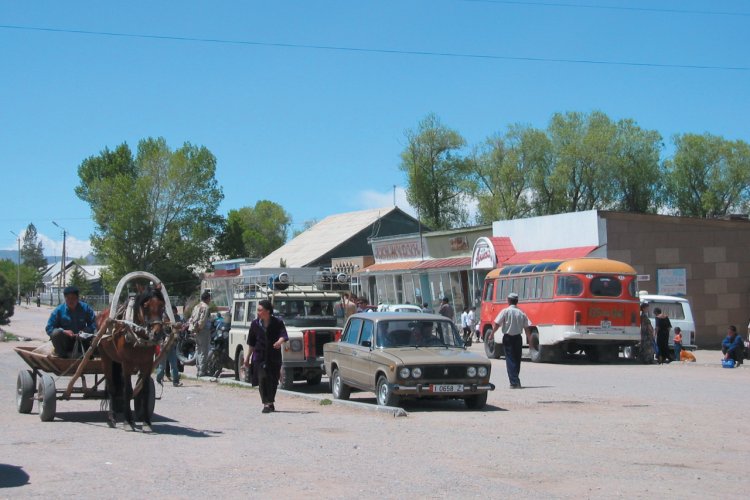 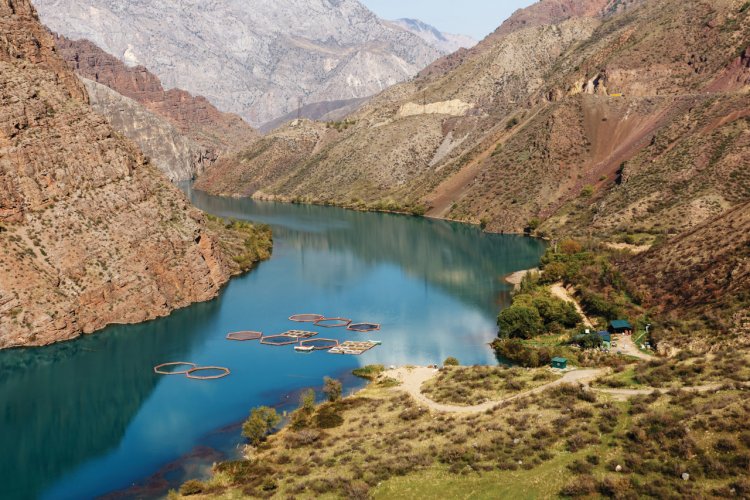 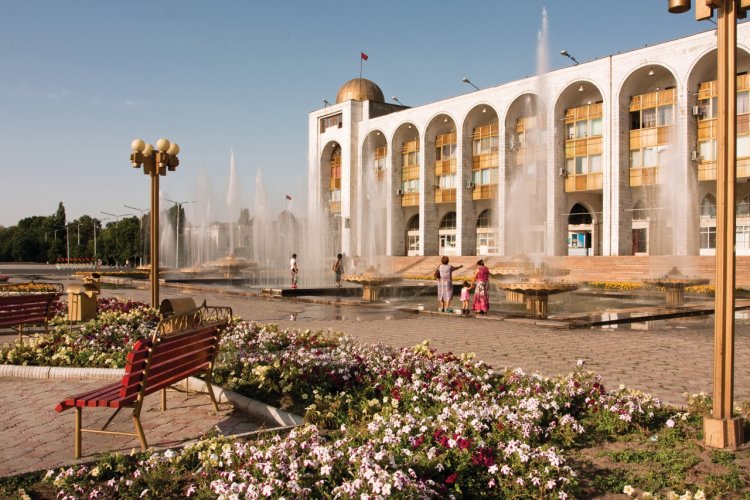 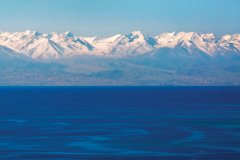 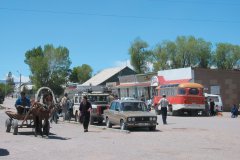 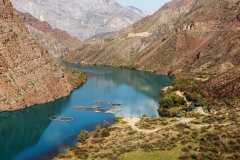 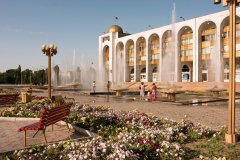 When to go to Kyrgyzstan? The climate is extremely harsh due to the high mountains that cover the whole country, and...
Read more about it

Kyrgyzstan's weather is subject to the climate of Central, Continental and Dry Asia. It is very hot in summer, very c...
Read more about it

The national currency is the Kyrgyz som (KGS). Apart from driving, especially 4x4s, to remote places, life in Kyrgyzs...
Read more about it

In order to facilitate the country's tourist development, Kyrgyzstan has, since 2012, exempted most European national...
Read more about it

There is no compulsory vaccination to travel to Kyrgyzstan, all you need is to have your vaccinations up to date. How...
Read more about it

On the side of large airlines, the average price of a round trip Europe-Bishkek air ticket varies from €600 to €8...
Read more about it

Although not very popular with tourists, Kyrgyzstan is on the programme of some travel agencies and tour operators sp...
Read more about it

On the aircraft side, the number of domestic routes is limited by the obsolescence of airport infrastructure. All Ky...
Read more about it

To travel, it is not necessary to roll in gold. Backpackers or itinerant travellers know this very well, apart from air travel, which can be expensive - even if we had already given you some good tips to help you get it at the best price, once you get there, there are several ways to save. Certainly, palaces and starred restaurants are to be banned in order not to exceed your budget, but eating a sandwich in front of a splendid landscape is ...