Situated between the high peaks of Tibet and the Ganges plains, Bhutan is a country of priceless treasures, yet remains little known to the general public. Its unspoilt nature makes it a real paradise for hikers who discover beautiful landscapes as well as architectural wonders. Its traditional culture has remained perfectly intact over the years and it is also very pleasant to come into contact with a population that is incredibly hospitable and always ready to open its doors to visitors. If its particular geography has contributed to its isolation throughout history, it is today a destination to consider when one wishes to discover a territory with multiple facets as well as to immerse oneself in the Buddhist culture. Here are the must-haves of Bhutan. 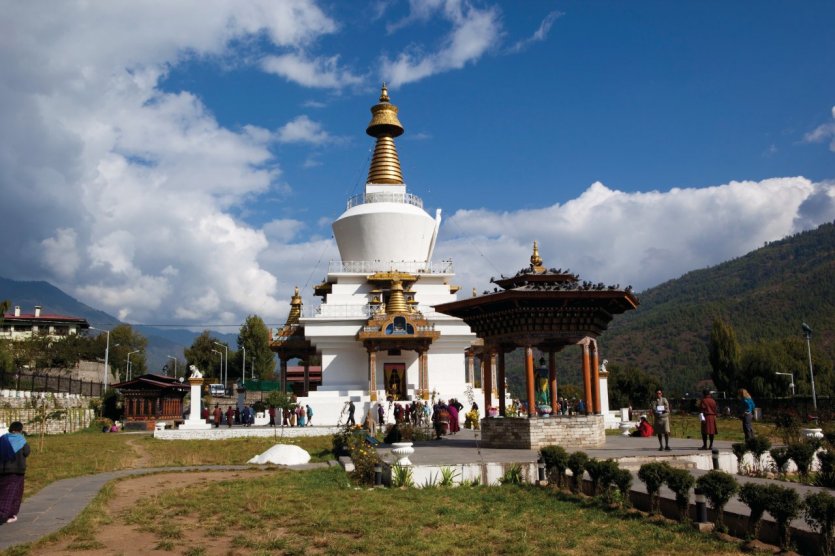 A visit to the capital Thimphu

On a trip to Bhutan, one must spend some time in its capital Thimphu. If the city tends to develop today, it is far from having lost its picturesque charm with here and there, touches of spirituality that take place in the middle of restaurants, cafés and shops. Don't miss a visit to its market where many Bhutanese come to sell their products. Then we must continue to the main places of worship: the Trashi Chhoe Dzong, which is the centre of current power, and the Chorten Memorial, where pilgrims come in large numbers to offer their prayers. After visiting the national museum, why not take the road to Changlimithang Stadium, where you can watch the national sport of archery 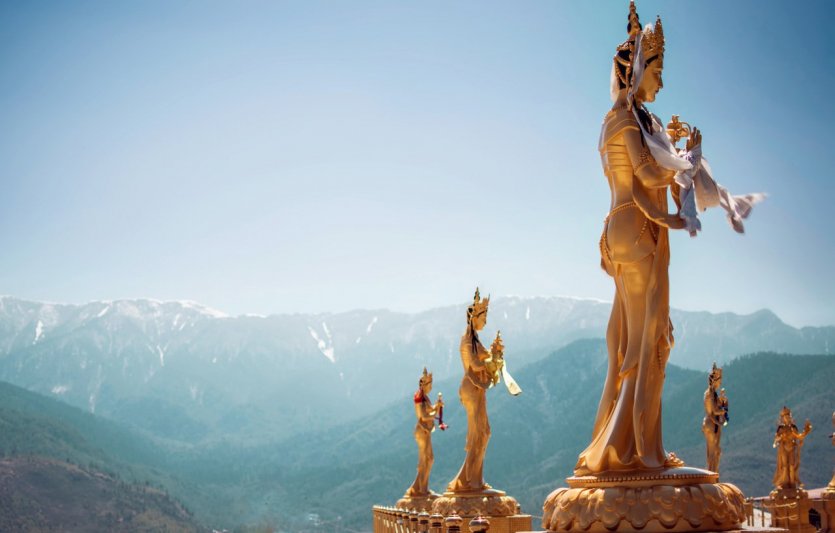 Bumthang is a region in the centre of the country and is also its spiritual heart, where the oldest Buddhist sites can be found. There are four valleys in this incomparably rich region, the most famous of which is the Choskhor Valley. We start by visiting the ancient Jambay Lakhang temple, which was built in the 7th century and hosts an impressive Buddhist festival every year. Another monastery, another beauty: Kurjey Lakhang is an interesting and surprising place, since it is in a cave that visitors discover the body imprint of a great Buddhist master, Guru Rinpoche. In addition to the ancient monasteries which contribute greatly to the beauty of the area, Bhumtang is also a region of great natural beauty. And during walks, one also goes to meet inhabitants with an ancestral and rural way of life 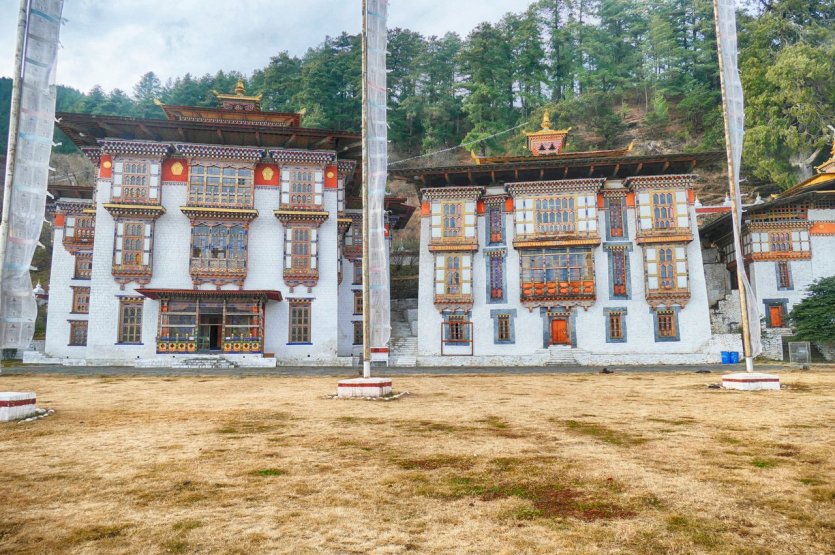 If Bhutan is a territory marked by a beautiful preserved nature and many monasteries, the discovery of the kingdom is also done through festivals. The country is deeply marked by faith, traditional values and on the occasion of great events, there are superb masked dances in all the great monasteries. The Wangdue and Thimphu festivals are among the best known and take place in the autumn. On this occasion, rituals and costumed dances take place under the sound of cymbals, drums and trumpets, spiritual moments that aim to resurrect the gods and demons of Buddhist mythology. The whole population likes to get together around songs and rituals that aim at acquiring merits. In eastern Bhutan and Bhumtang, other festivals have an even more religious character and are more intimate. Here too, the inhabitants put on their most beautiful colourful costumes and the show is dazzling. 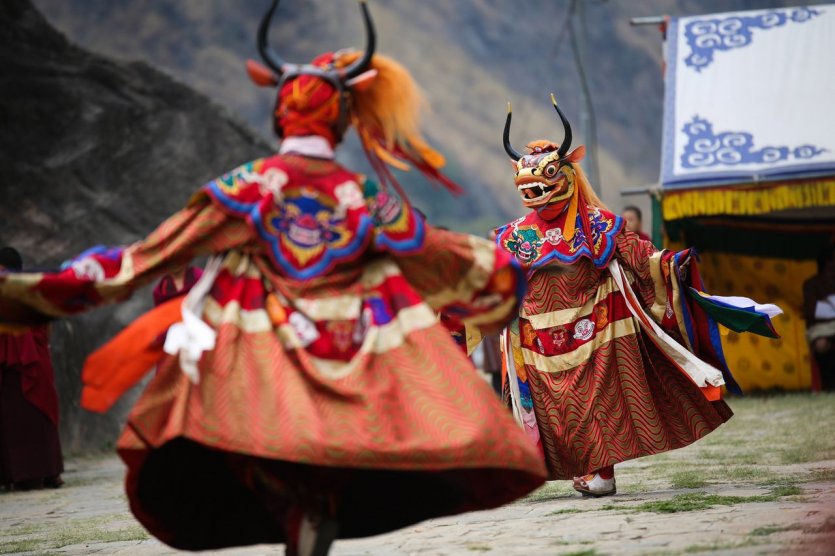 Heading west from Thimphu, Punakha, the ancient capital of Bhutan, is 80 km away. Built at the confluence of the Pho and Mo Rivers, the city's dzong is simply majestic and visitors love to spend time admiring it in its every detail. Although the site has suffered throughout history from floods, fires and earthquakes, it has always been rebuilt with great architectural harmony and the monument is now the winter residence of the king, a symbol of his past political function. Every year, the Punakha festival is held in the monastery courtyard and people sit at the amazing dances of the Buddhist monks. After a time at the dzong, you should also take the opportunity to explore the Punakha valley, superb with its forests of magnolias and rhododendrons 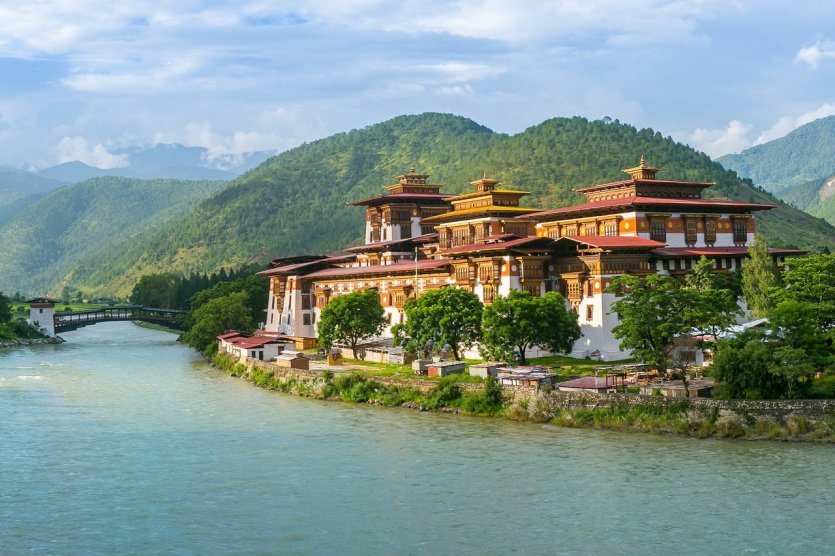 Explore the territory of Lhuntse

Lhuntse is an isolated territory in the northeast of the country. In the past, it was home to many residences of kings and today there are sacred sites that welcome pilgrim believers. The area lies at the crossroads of several national parks and is home to a preserved nature with sublime local wildlife. After taking a tour of the Lhuntse dzong, a 17th century masterpiece, one should enjoy its landscape of steep cliffs covered with coniferous forests. It is also in this region that we find the textiles used to make the traditional dress worn by Bhutanese women. And a trip to the Lhuntse territory cannot be perfect without stopping at a local's house to share the Ara, a local alcohol made from rice or fermented cereals. 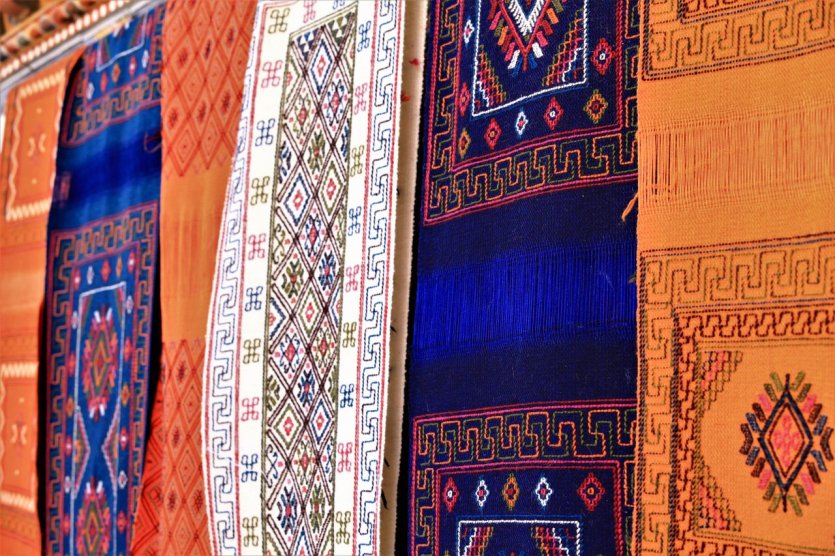 Marvel in the fertile valley of Paro

The Paro Valley is rich and fertile and is an essential stop on a trip to Bhutan. It is here, at an altitude of over 2,000 m, that you will find cultural sites of great interest and picturesque villages where you don't have to be afraid of heights. Perched on a hill overlooking the entire valley, Taktsang Monastery is a place not to be missed under any circumstances. It was built in 1692 and rebuilt in 1998 after a fire. It is also one of the most famous sites in the country. This fortress actually houses several temples and what makes the place so unique is its location on a dizzying cliff. If it takes several hours of walking to reach this marvel at an altitude of 3,000 metres, it is also possible to opt for a horseback ascent. In any case, you must let your gaze plunge into the heart of the Paro Valley, with its greenery and undulations. 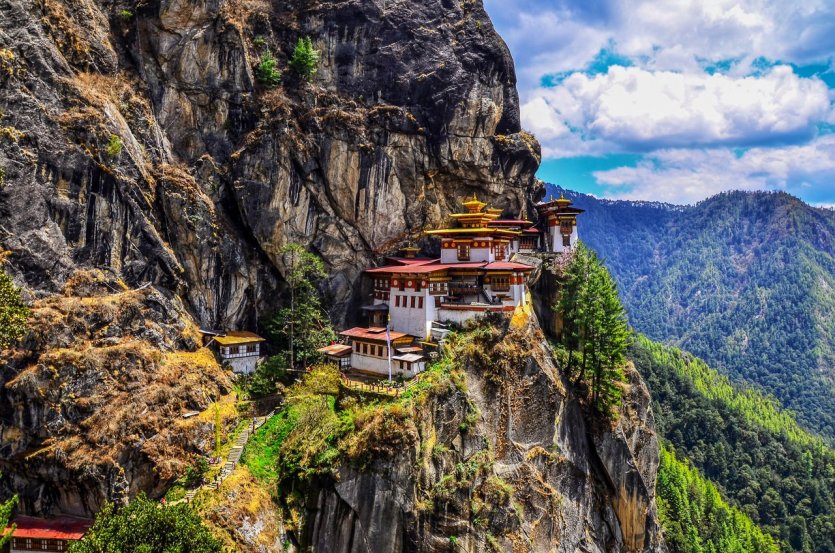 A stop in Trashigang

The city of Trashigang was in the past an important trading centre, especially for merchants who wanted to export their goods to Tibet. Visitors like to stop here to see his fabulous dzong, perched on a spur. It overlooks the valley and the river and in its centre there are a large number of period temples. Another activity to do is to stroll through the old bazaar. This is where you can enjoy local crafts and find "handloom" fabrics. For those who wish to go there in November or December, the district organizes the Trashigang Tsechu, an important religious festival which is the occasion for the inhabitants to dress up and meet around traditional songs and dances. The atmosphere is welcoming and it is a moment that leaves beautiful memories. 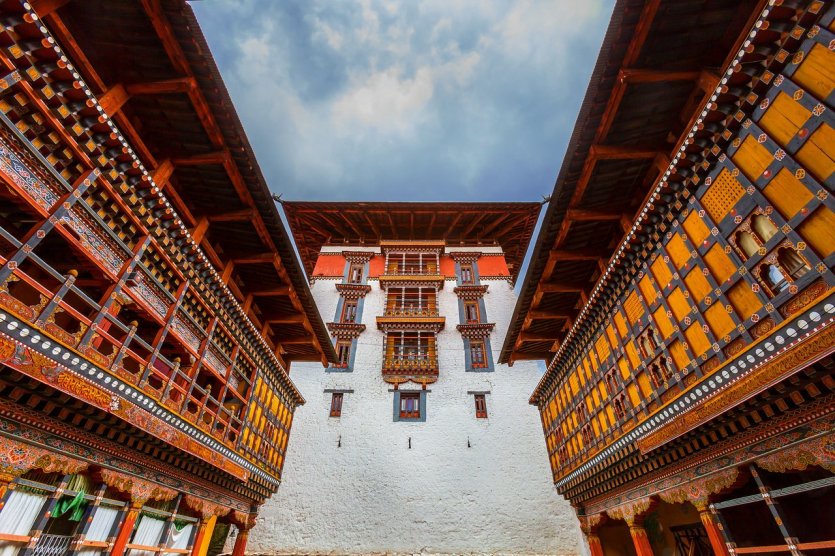 Bhutan is a completely unspoilt country but there are areas within the country that are virtually unexplored by visitors. This is the case of the Sakteng region, which is only 60 km from the city of Trashigang. The place is worth a look, especially to hope to see the species that live in the area: the snow leopard or the red panda. It is also an area where one can come into contact with a singular ethnic group, the Brokpas. Semi-nomadic people, they move from territory to territory with herds of yaks, in search of the most fertile pastures. These people stand out not only for their way of life, but also for their language, their religion and the way they dress. They are also fascinating stories to tell about the yeti, which they say continues to haunt the region. 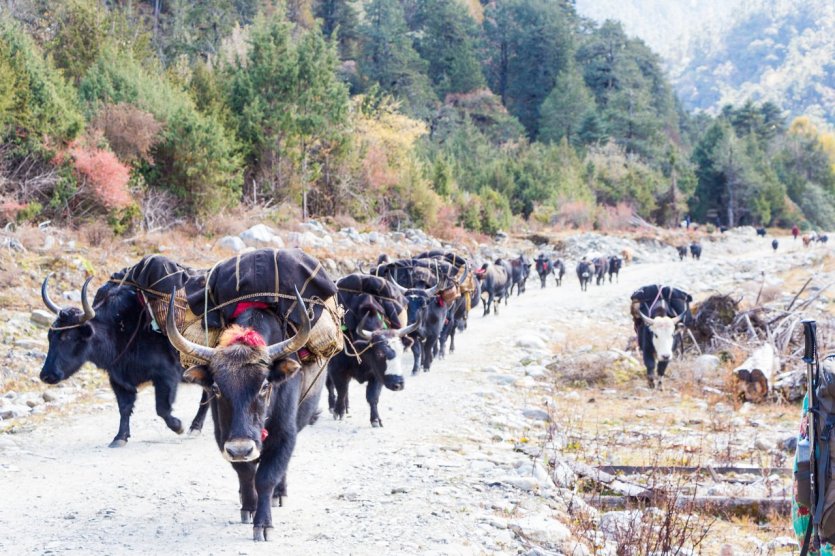 Getaway in the Haa Valley

After visiting the city of Paro, it is then recommended to head for the Haa Valley in Western Bhutan. One plunges then into a most calm atmosphere, with landscapes composed of wide green meadows. Access to this region is gained by crossing the Chela La, a high pass in the country that culminates at a height of 3,810 m. During a hike, we will see Lhakhang Karpo and Lhakhang Nagpo, the black and white temples, visit the Haa monastery and we can also push to the Kila convent. The Haa Valley is a perfect territory to walk for several days and stop for a few moments at the inhabitant's home, discovering the flavours of the local cuisine 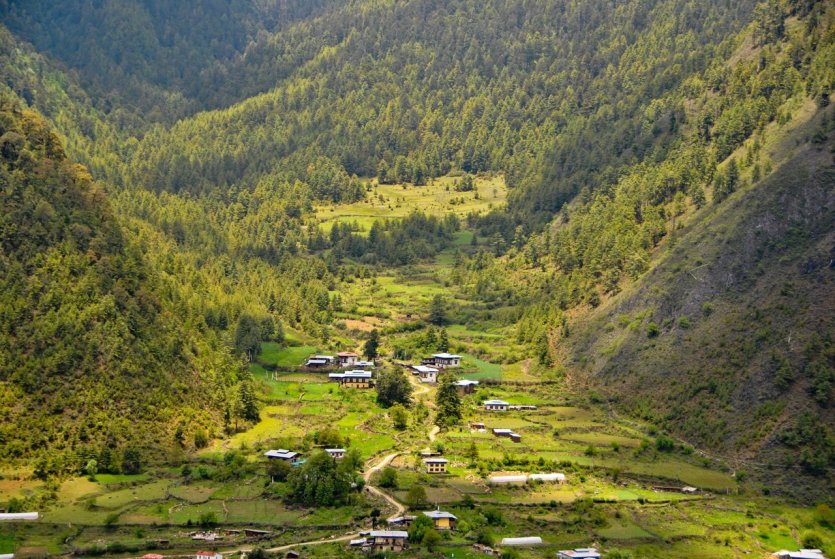 The hilltop village of Laya

If this exceptional village is difficult to access, it is definitely worth the detour. The best way is to trek from Gasa. During three days, we discover superb landscapes, alpine meadows, high mountains and dense subtropical jungles. We also cross paths with endemic species such as the takin, Bhutan's national animal. Then, once you arrive in the village of Laya, you will discover a commune where less than 1,000 people of the Layap ethnic group live, with their own customs and habits. They wear conical hats, splendid traditional clothing and jewellery. At the end of the day, they gather around traditional songs, a great moment to live in the highest village of the country. 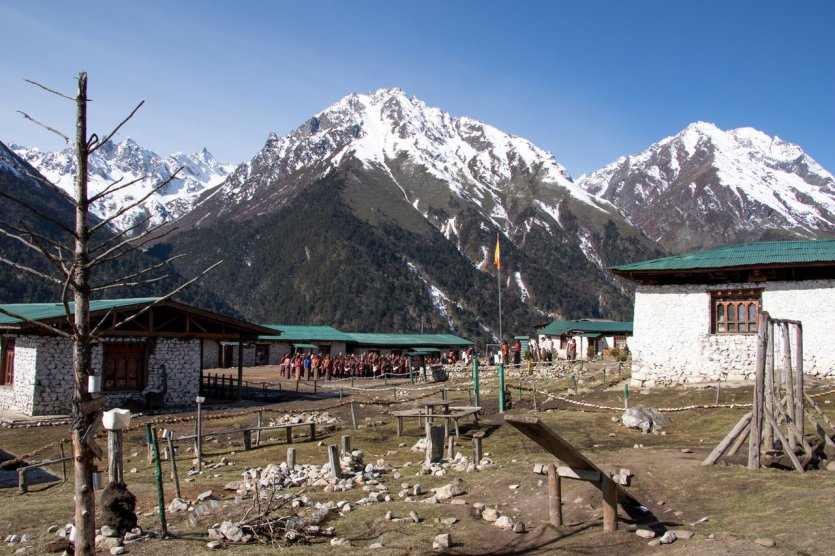