South Africa is above all the magic of the bush and the land of the Big Five where you can enjoy the safari of your dreams. Rhinos, elephants, leopards, lions and buffaloes are the 5 wild animals that every nature lover dreams of meeting and, being a little patient and persevering, you will see them all in the famous Kruger Park. But by following the instructions of a tourist guide in South Africa, your fascination for this country will go far beyond... You will discover the fascinating history of the Rainbow Nation, long under the Apartheid regime, going back in time to Soweto or Pretoria, without forgetting the ancestral traditions of Nelson Mandela's country between trances of Zulu wizards, and encounters with the Xhosa, Sotho and Swazi ethnic groups. A real change of scenery! Those who dream of beaches or idleness will go to Cape Town where they can also dive among the sharks and canoe among the whales. As for trekking fans, they will find their happiness in the Drakensberg mountains for more sporting activities. It's hard not to fall under the spell of South Africa, whatever your travel desires may be!

What to see, what to do South Africa? 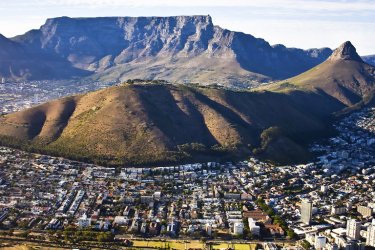 What to visit South Africa ?

When to go South Africa ?

To know when to go to South Africa, you have to rely on the seasons, but the country is so big that the weather varies from region to region!

November, December, January, February, March: it is summer in South Africa and the best time to visit the beaches of Cape Town, the south, the Indian coast and the Atlantic coast. Very high heat in the Karoo and Kalahari. On the Limpopo, Mpumalanga, Kwazulu-Natal side, temperatures are tropical with storms in the late afternoon. The Drakensberg is often rainy at the end of the day, not ideal for hiking in the mountains. In Joburg, hot weather during the day, stormy at night

April, May, June: It's autumn in South Africa. Rainfall is decreasing and temperatures are rising in tropical regions (Limpopo, Mpumalanga, Kwazulu-Natal). The weather is ideal in the Karoo, it is often sunny in Cape Town and better in the Kalahari. It is also the right time to hike in the mountains of Lesotho and Swaziland. And if you go to South Africa between April and June, don't miss the whale season on the Overberg coast.

June, July, August: winter is here and tropical storms stop on Joburg, the cold settles in at night. The months of July-August in South Africa are perfect for observing animals in Mpumalanga, Kwazulu-Natal and Kruger reserves. Beautiful dry weather in Karoo and Drakensberg, but very cold at night, with snow-covered peaks. It's the wrong season to go to Cape Town where it rains a lot. Good temperature in the Kalahari on the other hand.

September, October: it's spring! The Namaqualand is flowery and the climate is temperate in Kwazulu-Natal. In Cape Town, on the Indian coast and in Pretoria it is the return of the sunny days as well as in the provinces of Mpumalanga and Gauteng. It is the ideal time for mountain hiking in Swaziland, Drakensberg and Lesotho, but the temperature drops at night.

Due to the Covid-19 pandemic, entry and travel restrictions may apply South Africa. Remember to visit the site of the Ministry of Foreign Affairs before you leave for the latest information
Practical information for travel South Africa
Formalities Budget Horaires Getting around Gastronomy

From Johannesburg to Cape Town

The multiple facets of South Africa

How to go South Africa

You will mainly travel to South Africa by plane. Johannesburg's OR Tambo Airport is the largest in Africa. Every day, many national and international flights take off and land there. To obtain attractive rates, it is essential to do so well in advance. Remember to buy your plane tickets six months before departure.

Many tour operators offer tours in South Africa but, due to the large size of the country, you will not be able to discover it all at once. The proposed stays, lasting an average of 15 days, cover the main regions and themes: discovery of wildlife in Kruger Park, seaside resort in Cape Town or Durban, stay in Mandela's footsteps from Soweto to Robben Island... Good to know: Autotours are preferred and bus journeys can be quite long.

South Africa is served by many domestic flights but fares are rather high. On the other hand, boat transport is rather rare outside the maritime links Cape Town / Durban or Port Elizabeth / Durban. However, roads are generally good and well developed across the country. We therefore recommend that you rent a car or take a long-distance bus, which is rather cheap and serves most major cities.

From the desert to the sugar cane plantations, from the beaches of the Indian Ocean to the cliffs of the Cape, South Africa covers no less than 1,219,090 km2. The country has a great diversity of landscapes and climates while presenting a relatively simple relief. Its V-shaped coastline forms the southern border of Africa and stretches from Mozambique on the Indian Ocean side to Namibia on the Atlantic Ocean side. In all, there are no less than nine ecosystems that coexist in South Africa, offering completely different landscapes. While crossing regions, one can pass from vast expanses of stones and sand to forests of eucalyptus, or of pines bordering the ocean. From small villages frozen in time to vibrant mega-cities with the feel of an American city, the country is crossed from the bush to the ocean, passing through beautiful mountain ranges and endless vineyards.

Mandela: a thirst for the ideal

Elephant, lion, rhino, buffalo and leopard make up the famous Big Five. Often among the most difficult animals to see on safari, they are also the most dangerous to hunt. Now protected, they live in national parks such as the Kruger and the country's private reserves, in the heart of magnificent landscapes.

The South African speciality that dates back to the time of the Great Trek. At that time, the Boers, who had to conquer distant lands, set out on the great plains. Meat that was not eaten immediately was cut into thin strips and left to dry on the tarpaulins of the wagons. Today, biltong is served as a snack, as an aperitif. We love it!

The country is surprisingly diverse in terms of plant species, thanks to a climate that varies greatly from one region to another. But the prize goes to Cape Town. Protected in the depths of an environment classified as a Unesco heritage site, the region enjoys a Mediterranean climate where an ecosystem called fynbos reigns: 9,000 plant species, half of which are endemic

The braai is sacred to South Africans! White, black, mixed race or Indian, everyone is completely addicted to the barbecue. Raised to the rank of religion, the braai will never be electric. It hosts various meats: boer sausages, beef and ostrich steaks or kudu, all served with plenty of beer.

South Africa has no less than eleven spoken languages, as many different ethnic groups with very strong tribal and European traditions. Apartheid is over, but everyone lives together without mixing, because of the cultural gap. The new generation seems to be a little more mixed, on the campuses and in the new neighbourhoods.

The expression "rainbow nation" was coined by Archbishop Desmond Tutu to represent the range of South African nations at the end of apartheid. A metaphorical way of thinking about the cohabitation of groups, juxtaposed in tolerance. The image of colours that do not mix and of inequalities that remain was criticised.

In Afrikaans, rooibos means red bush. It is often called red tea, but it does not contain any theine and can be consumed as an herbal tea without any problem. On the contrary, rooibos has many medicinal virtues against insomnia, but also asthma, allergies, constipation... You will find it in all its forms.

The wine route was launched in Stellenbosch in the 1970s. Now adopted by other Western Cape wine regions, such as Paarl and Franschhoek, it is a mecca for tourists. Nestled between mountainsides covered with flowers on one side and vineyards on the other, the road is splendid. Along the landscape, you can taste.

Sangoma and other healers with magical powers are part of the Zulu, Xhosa and Swazi universe, and are considered to be indispensable interlocutors. The 200,000 traditional "doctors" in South Africa are consulted primarily by 80% of the black population, who are wary of modern medicine. They even have health insurance!

Shebeens are to black South Africans what pubs are to the English, taverns to the Bavarians and bars to the French. The name is said to mean "unauthorised drinking establishment". At one time, "white" liquor was forbidden to blacks. This gave rise to underground bars in the townships. Today, they are the place to be

Soweto in Johannesburg and Khayelitsha in Cape Town: these two names are the best known, but hundreds of townships exist on the outskirts of the cities. These neighbourhoods stretch for miles. Small coloured houses built by the government are trying to replace the endless fields of tin shacks

In Bantu parlance,ubuntu is considered a true humanistic and fraternal philosophy, one that fundamentally integrates the "other" into one's success and fulfillment. It is a fundamental concept in the philosophy of reconciliation developed by Desmond Tutu with the abolition of apartheid

You consider braai a religion. A successful party is a barbecue party with friends.

You accompany your meals with a good cold beer.

You don't hang out alone in the streets at nightfall and opt for a taxi or Uber ride home.

You support the local economy by buying responsibly

You keep your best smile in all situations

You get out of the water quickly when a black flag with a shark on it is raised on the beach and an alarm sounds.

You shout lekker! as soon as you find something great

You're tempted by adventures and nature sports: from surfing to mountain biking to hiking