Turkey is a crossroads of European, Arab and Asian civilizations, symbolized by the cosmopolitan Istanbul, its economic and cultural capital, and is also a formidable mosaic of landscapes. From the lush mountains adorned with monasteries overlooking the Black Sea to the reliefs sculpted by erosion and volcanic eruptions in Cappadocia, from the steppes and canyons of Anatolia to the 7,000 km of coastline bathed by four seas, this destination has enough to fill many trips well accompanied by its Turkish tour guide. There is a wide choice between the many remarkable archaeological sites such as the ancient ancient city of Ephesus, the mythical Troy or the tomb of Nemrut Dag, the cities steeped in history such as Istanbul, Ankara, Antalya or Konya, seaside resorts such as Bodrum or Marmaris, the fine sandy beaches of the Turquoise coast, or the countless hiking trails, the most prestigious of which is without doubt the climb of Mount Arafat (5 165 m), the highest point in the country. You can also imagine the lifestyle of the sultans by visiting the famous Topkapi Palace. And we don't talk to you about the local cuisine and traditional hospitality of the Turkish people, never stingy with a welcome tea or coffee. A trip to Turkey is a dive into the remains of the Ottoman and Byzantine Empire. Due to its geographical location, Turkey is a real gateway to Europe and Asia. You will find by leafing through your Turkey guide many addresses of places to visit during your stay.

What to see, what to do Turkey? 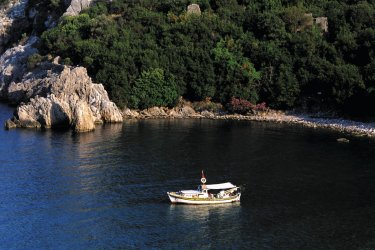 What to visit Turkey ?

When to go Turkey ?

The high tourist season in Turkey begins at the end of June and ends in August. That is why the best time to travel to Turkey is in May or from September to October, when the climate is still very suitable and prices are low. The low tourist season corresponds to the winter in Turkey. Many Turkish tourists also travel inland during the Bayrams, the religious holidays, which take place after Ramadan. At that time, prices very often increase and long-term transport reservations are necessary.

Due to the Covid-19 pandemic, entry and travel restrictions may apply Turkey. Remember to visit the site of the Ministry of Foreign Affairs before you leave for the latest information
Practical information for travel Turkey
Formalities Getting around Gastronomy

It's not wants that you'll lack when planning your trip, but time. The Turkish territory is vast and you will have to drive miles to get from one region to another. Therefore, we advise you to plan your itinerary taking into account the travel time (often by bus) and the accessibility of the roads. For a first stay, the majority of travellers opt for the three most famous tourist destinations: Istanbul, the Mediterranean coast and Cappadocia. However, the plains of Central Anatolia, the creeks of the Aegean Sea, the mountains and thick forests of the Black Sea or the lakes in the centre and east are places that will dazzle your eyes and your heart. Below are a few ideas for some must-see trips.

Most of Turkey in one week

How to go Turkey

For Turkey, airlines mainly offer flights to Istanbul. Feel free to use a price comparison service on the Internet. In addition, some airlines do not charge booking fees if you book your flight directly on their website, or these fees are significantly reduced if you buy your ticket overnight.

The choice of sites is so wide and varied that there are a multitude of organized tours for Turkey. Some target the west of the country between Istanbul and Cappadocia via Ankara, others take you further south along the Lyciene coast on the Turkish Riviera or north along the Black Sea to discover the famous Sumela Monastery.

The bus is the most economical means of transport and the most used by Turks because it serves the whole territory unlike the rail network. Air travel is a more expensive but practical solution and there are many domestic flights. The road network is in good condition with 2,000 km of motorways.

Why is plastic surgery cheaper in Turkey?

Medical tourism: why choose Turkey for a hair transplant?

Hero and inspirer of the War of Independence, Atatürk, founder of the Secular Republic of Turkey, saved the country from dismantling, created the foundations of a nation-state and set it on the road to modernization. Its influence on Turkish political and social life remains very great. No disrespect to the person is tolerated.

The yoǧurt is the main ingredient of this very popular and thirst-quenching drink, it is beaten with water and salt. To be tested with a kebab. In 2013, Recep Tayyip Erdoğan, then Prime Minister, decreed the ayran the national drink of the Turks. Which is not to everyone's liking, some considering that the title belongs more to rakı.

The Bosphorus Strait (Boğaz) is the passage between the Black Sea and the Marmara Sea, the southern limit between Europe and Asia with the Dardanelles Strait. This magnificent blue channel running through Istanbul gives the city an extraordinary cachet and separates it into two entities. Its traffic (50,000 ships/year) is one of the densest in the world.

"Mosque" in Turkish. Turkey is full of them, Istanbul is said to have about 3,000. Every town or village has minarets rising to the sky from which the prayer is sung five times a day. With its domes, the style of these mosques is peculiar to Turkey. The most famous ones are built by the famous Turkish architect, Mimar Sinan.

Tea in Turkish, almost a symbol of the country, as it can be found everywhere and at any time. Slightly more pungent than tea drunk in Europe, it is drunk in very small glasses. If you want it less loudly, you have to ask for it açık (clear). It is very common to come across Turks sitting in the street enjoying their tea with a few friends.

A must during a stay in Turkey. The hammam (Turkish bath) consists of three stages: the "sweating" on the marble, the torpor that prepares the body for the scrub and the soap massage. Many establishments are old. Men and women are separated: there are rooms reserved for each sex, at different times and on different days.

Culinary speciality of the country that has crossed the borders and that the traveller expects to taste when arriving in Turkey. Nevertheless, the kebab has multiple forms. This is the name of the dürüm, but also almost all the ways of preparing meat: şiş kebab (skewer), döner (on the spit), çop kebab (small pieces)..

This Ottoman Michelangelo built his first mosque at the age of 45 in Aleppo (Syria) and became chief architect at court. His masterpieces are the Süleymaniye and Şehzade mosques in Istanbul. The famous Blue Mosque is the work of one of his disciples. He created his last masterpiece in Edirne (Selimiye Mosque) at the age of 85.

The nazar (or nazar boncuk) is a fetish object used to protect from the evil eye. Handmade from glass paste, it is often tinted blue and its design represents the iris with its white dot in the center. It can be found everywhere: in his house, hanging from front doors, as a key ring, hanging from the rear-view mirror...

It's unofficially the national drink. Produced from the distillation of grapes, figs or plums, flavoured with aniseed, it belongs to the family of aniseed drinks from neighbouring countries: arak or ouzo. The rakı is eaten at parties, at mealtimes and traditionally accompanied by cheese, mezzés and fish. To be enjoyed pure or diluted.

For centuries, carpets have been part of the life of nomadic and sedentary Turks. Utilitarian or decorative, carpets are divided into 2 categories: knotted carpets (halı) and woven carpets (kilim, zili, sumak or cicim) which differ according to the technique used. They have different names depending on their size and use.

This game is one of the oldest in the world, the first are said to have originated in Mesopotamia. A real institution in Turkey, you will see the Turks, from morning to evening, in certain alleyways filled with small tables provided for this purpose, in the çay evi where men gather or on the corner of a table. A chance to learn.

You never refuse to taste a dish that is offered to you.

You say Afiyet olsun ("Bon appétit") before, during and after meals.

You take off your shoes when you go into someone's house or a mosque.

You feed and care for the street cats.

You avoid showing affection in public to your boyfriend/girlfriend, such as languid kisses.

You have a deep respect for Atatürk and, by extension, a strong attachment to the republic, secularism and freedom.

You do not blow your nose at the table (the worst offence).

You use in everyday life the polite expressions of the Turkish language: "Eline sağlık" (May your hands be healthy!), "Nazar deymesin" (May the evil eye not reach you!), "Aferin" (Bravo!), "Allah korusun" (May God protect you/you/us!), "Hoş geldin" (Welcome!) or "Maşallah" (Welcome!) (God's will!).