Shared between the State of Israel and Jordan, the Dead Sea takes its name from its high salt content, which excludes any possibility of life in its waters. Every year it attracts several thousand visitors who come to enjoy its medicinal virtues. Indeed, its mud, water and generous sunshine make it a true sanctuary of health. Near the Dead Sea, vacationers have the opportunity to engage in a wide range of activities. Swimming, relaxing in the sun, hiking, natural curiosities and exceptional archaeological sites are the delight of all those who wish to experience a complete change of scenery. Here are the must-see Dead Sea events.

Going to see the fortress of Massada

The fortress of Masada is about ten kilometres south of Ein Gedi. It takes place at the top of cliffs overlooking the Dead Sea and a majestic desert landscape. Having welcomed the Jews who fled Jerusalem following the Roman takeover of the city in the past, it is today the symbol of the resistance of the Jewish people. The ruins are sublime and can be reached either by cable car or on foot. It is advisable to get there early in the morning so that you can watch the wonderful sunrise over the Dead Sea from the heights. Since 2001, this fascinating archaeological site has been a UNESCO World Heritage Site

Trekking to the Qumran Caves

Qumran is located on the northwestern tip of the Dead Sea. Between the 8th and 2nd centuries BC, the site was inhabited first by Israelites, then by Essenes, before being abandoned. At the beginning of the Christian era, it was rebuilt and inhabited until the year 68 and the first great revolt against the Romans. Inhabited again by the Romans between 132 and 135 AD, it fell into oblivion again until the discovery of the famous Dead Sea Scrolls in 1947. A trek to the Qumran Caves leads to a visitor centre that explains the history of the site. Visitors can then enter the caves, visit the ruins of the village of the Essenes as well as contemplate the crafts of ancient Qumran, tools, pottery and ancient documents

The Ein Gedi Nature Reserve is a tropical oasis in the Judean Desert. It is one of the most popular sites around the Dead Sea, due to the presence of splendid waterfalls. The scenery is spectacular and the trails that allow hikers to stroll in peace and quiet have different levels of difficulty. The main activities are the contemplation of the fauna and flora, and of course, the refreshing times in the natural pools that can be found along the path, at the foot of the waterfalls. In a region where it is often very hot, it is a pure joy to be able to swim and regain strength before continuing on the road that offers superb panoramas of the Dead Sea. The site also includes a first century AD village and beautiful archaeological sites.

One cannot go to the Dead Sea without wanting to swim in it. That's why Kalia Beach is a place that has been specially designed so that bathers can enjoy the sun and sea in complete safety. A swim in the Dead Sea is an extraordinary experience, the high salt content makes the body float. It is extremely pleasant to lie on your back in the water and simply sunbathe. Kalia Beach is also a beach where visitors can find everything they need to have a good time: beach chairs, umbrellas, showers, a bar and a restaurant. In order to respect this beautiful place, everything has been put in place to contribute to a tourism that respects the environment. There are recycling bins, ashtrays, and showers are heated by solar energy. Kalia Beach is an ecological beach.

A journey on the King's Road

A good way to reach the Dead Sea in Jordan is to take the King's Highway. This is the opportunity to stop in the city of Jerash, one of the most beautiful Greco-Roman sites in the world. Then we continue with the astonishing Ayyubid castle of Ajlun and Kerak, the medieval fortress of the Crusaders. Then we stop near the Dead Sea for a swim. Then it's time to head back to the Dana Nature Reserve, crossing breathtakingly beautiful landscapes. The King's Route, although winding, crosses valleys and hills where the colour of the rocks and the blue of the sky offer a spectacle of great beauty. Along the way, many villages shelter vestiges of past periods.

Hiking in the Wadi Mujib Reserve

The Wadi Mujib Reserve is close to the eastern shore of the Dead Sea. It is a sumptuous place for hiking, due to the variety of landscapes offered. This is where the natural gorges of Wadi Mujib, which flow into the Dead Sea, are found. The reserve's variations in altitude combined with the flow of water give it exceptional biodiversity. Thus, during a walk, one should not miss to observe the plants, with the presence of more than 300 species. The fauna is also impressive, with several carnivores and many species of migratory and sedentary birds. Bird watchers at heart will find the Wadi Mujib Reserve a true paradise. The valleys with sandstone cliffs are also an ideal habitat for species such as the wild cat or the beautiful Arabian Ibex

A visit to the site of Bethany beyond the Jordan River

On the eastern banks of the Jordan River, nine kilometers north of the Dead Sea, lies the archaeological site of Bethany beyond the Jordan River. The site actually includes two main areas. First there is Tell Al-Kharrar, then the area of the churches of St. John the Baptist near the Jordan River. If this place, which is located in the middle of wilderness, attracts visitors and especially many pilgrims, it is simply because it is considered in Christian tradition as the probable place where John the Baptist baptized Jesus of Nazareth. There are churches and chapels of Roman and Byzantine origin, a monastery and caves. This symbolically religious place is of great beauty and classified as a UNESCO World Heritage Site.

Smearing the mud of the Dead Sea

One of the most important experiences once you reach one of the Dead Sea beaches is to get the famous mud. Legend has it that the Queen of Sheba, King Solomon and Cleopatra dived into mud baths in the Dead Sea to take care of their skin. The colour of the mud, which is composed of natural, organic and mineral sediments, tends towards black. In any case, do not hesitate to take some and spread it all over the skin, then leave it on for 20 minutes before rinsing off. The black mud from the Dead Sea is renowned worldwide for nourishing the skin and removing impurities, but also for treating rheumatism, respiratory problems, skin problems such as psoriasis and eliminating cellulite.

According to the Bible, it is on Mount Nebo that Moses died at the age of 120 and his tomb is found. The Muslims, for their part, believe that this one is in Jericho, Israel, the other city on the Jordan River. In any case, a trip to Mount Nebo is made by many Jewish, Christian and Muslim pilgrims. There is a church and a most amazing sculpture. This one was made by an Italian artist and represents the staff of Moses in the form of a cross around which is hung a snake, it is the serpent of Airain. Legend has it that he heals people who have been bitten by a snake. From Mount Nebo, don't miss the panoramic views of the Jordan Valley and the Promised Land

An excursion to the city of Madaba

During a stay by the Dead Sea in Jordan, one should not hesitate to treat oneself to an urban excision in the direction of Madaba. It is the Christian stronghold of the country. It is home to around 40% of the territory's Christian population. For visitors, the city is perfect for wandering through picturesque alleyways and seeing its emblematic monuments such as the church of Saint-Jean-Baptiste. The city is also worth a visit, as it has continued to develop the art of mosaics, inherited from the Byzantine Empire. The most famous mosaic is the one found on the floor of St. George's Church and is called the Madaba Map or Madaba Mosaic. But mosaic can also be seen in the many stalls, this art is indeed used to make cups, plates, frames and decorative elements of all kinds 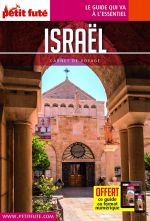 Our selection of vegetarian culinary specialities from around the world

From India to Italy to Greece, many countries have vegetarian dishes among their culinary specialities. These succulent ...

Discover Israel in a different way

Revered by Judaism, Islam and Christianity, Israel is a land that has seen the Egyptians, Babylonians, Persians, ...

Top 10 most beautiful mothers in the world

Self-taught photographer, Pascal Mannaerts has been travelling the world with his camera for about ten years. On the ...