Moldova: a journey to the heart of one of Europe's most secret destinations

Moldova is a small central European country located between Romania and Ukraine. Far from mass tourism, this territory still unknown to many travellers nevertheless conceals many treasures and offers the possibility of a stay where time is slowed down. From this country whose independence only dates back to 1991, we retain a notable heritage in the main towns and villages, numerous monasteries with various influences and above all a preserved nature, landscapes of plateaus and plains which shelter here and there vineyards open to tasting. In short, a trip to Moldova offers the opportunity to discover a country off the beaten track, to return to the true values of life and to simple pleasures: gastronomy based on good garden produce, a wine that reveals the legends and stories of a small valiant people, escapades in the open air with outdoor activities, the contemplation of exceptional monuments and the meeting in the villages with simple people who have managed to preserve their most cherished traditions. Interactions that undeniably make you want to take an interest in their history, as well as that of the country.

Gentle escapes into the Moldavian countryside

An unspoiled destination par excellence in Eastern Europe, Moldova reveals a preserved nature in which it is good to hike for hours. Starting with the Padurea Domneasca nature reserve, the largest in Moldova, located on the banks of the Prut River. Its landscape is made up of a thick green forest where a variety of flora and fauna live. During a walk in this real green lung, you should not fail to open your eyes to see martens, deer, swans, wild cats or herons that come to rest around the lake. The charms of the forest can be found in another nature reserve, that of Plaiul Fagului. In this immense ecosystem, one passes near oaks, beeches and ash trees and one also has the pleasure of crossing the path of a multitude of animals, including more than 140 species of birds. It is also on this territory that the highest peak in Moldova is located: the hill of Balanesti, which rises to 429m. And how can we talk about escapades in the heart of rural Moldova without mentioning one of the most popular sites in the country, Orheiul Vechi. This unmissable place, located around the Raut River, is an important archaeological and historical complex. Here, one must take the time to go on foot or by bicycle, to take roads that are a real paradise for bird-watchers, between forests and hills. Then, later on, one leaves room for architecture by going to see the monasteries which take place in the heart of caves and which were built by men between the 15th and 18th centuries. In Orheiul Vechi, we also stop in the villages and plunge into the heart of traditional Moldavia. In Morovaia, Trebujeni and Butuceni. The latter is one of the most popular villages, with its colourful houses situated in narrow streets. It preserves the Moldavian traditions of the past and one enjoys stopping for a hearty and comforting soup in an inn. The best way to plunge into the heart of traditional Moldovan life and to practice rural tourism is to put your suitcases in a guest room, an experience that allows you to really feel disconnected, to get in touch with a warm population and to participate in the elaboration of a traditional meal.

Of course, when you talk about vast natural areas, you also talk about the possibility of taking part in a wide range of sporting activities. On foot, on horseback or by bicycle, you can get in touch with nature and enjoy slow tourism by crossing the forests until you reach the splendid monastery of Capriana. Not far away in the Vatici Valley, the splendid monastery of Curchi is located in the middle of breathtaking nature and centuries-old oaks that await only the curious walkers. In the north or in the south of the country, on the Nistru and Prut rivers, kayaking is an activity that allows you to observe the Moldavian land curiosities in complete tranquillity. And then, those who like a good dose of thrills can settle down on board a jeep to survey the winding paths of Orheiul Vechi, just like getting on board a hot-air balloon or take a paragliding flight to observe the beauty of nature from the sky

While waiting to plan a trip to Moldova, don't hesitate to visit the 360.moldova.travel website, which offers 360° virtual tours of several key places in the country.

In Moldavia, the culture of the vine is secular. Although the vineyards and cellars were largely destroyed during the Second World War, they were rebuilt by the Soviets from the 1950s onwards. Today it is a pillar of Moldova's economy. A trip to the country is the ideal opportunity to discover vineyards, to enjoy the explanations of craftsmen who are always happy to communicate about their work and traditions, and also to taste succulent beverages. Moldova is included in the "European Wine Route", which means that visitors can take different routes that take them from north to south and from east to west on the territory. Visits to wineries, such as those of Castel Mimi, Purcari, the underground national galleries of Milestii Mici or Cricova are highly recommended, both to discover local productions through tastings, but also to go and meet Moldovans and their way of life. And then it should be noted that Milestii Mici is quite simply the largest wine cellar in the world, with the largest collection of wines in the world (recorded by Guinness Book), a real underground city in which you can move around on foot, by car and even by bicycle! A small variant for lovers of wine tourism, Moldova is also known for its aged eaux-de-vies. These drinks prepared according to the production techniques of cognac bear the certified appellation of "Divine". A visit to the producer of Divin "Barza Alba" (White Stork) in Balti offers the possibility to taste the 50-year-old Divin "Prezident", which is offered as an official gift to several foreign presidents.

To accompany the wine, you should not fail to take an interest in Moldovan cuisine. Whether one sits at the tables of restaurants in the country's main cities, such as Chisinau, Soroca and Tiraspol, or settles down for a few nights in a rural guesthouse such as one can find in the charming village of Trabujeni in the centre, or in Valeni in the far south, try the Moldavian soups that warm up in winter, such as Zeama soup, a very popular soup made of poultry, salt, tomatoes, onion, carrots, noodles and parsley, as well as the unmistakable borscht. You can also delight your taste buds with a dish such as Mamaliga, a polenta accompanied by meat, homemade cheese, fresh cream and vegetables as well as with a plate of coltunash, vegetarian ravioli that can be eaten sweet or salty. And how can we not talk about Placinta, the national dish? This traditional pastry is made with puff pastry to which a filling made with cabbage, cheese, green vegetables, pumpkin or even fruits such as cherry is added for sweet pleasures.

Monasteries, other treasures of Moldavia

A visit to Moldova cannot be complete without venturing to the foot of some of its most beautiful monasteries. They are often located in the middle of beautiful landscapes and in the heart of small picturesque villages. One such monastery is Saharna Monastery, located 120 km from Chisinau. In addition to its pastel colours, the Dniestr river flows nearby and the surrounding hills add to the charm of the place. From the monastery, you can reach the banks of the Saharna River and enjoy a rest at the foot of one of the 22 waterfalls. The Hincu Monastery is another sublime building, which takes place in the heart of the hundred-year-old forests. Its pale yellow facade and its numerous domes recall various influences, one thinks oneself a time in Russia, a time in Turkey. The place is in any case peaceful and offers a roof for the night to those who wish to make a pilgrimage. Another splendour and an essential stopover is the monastery of Curchi. Located in the Vatici Valley, its red and white façade contrasts with the green forest of Codru. This exceptional building, associated with the vegetation, is a place that invites silence and contemplation. 40 km from the Moldavian capital, the monastery of Capriana, whose creation dates back to 1429, groups together three different churches. Built in various styles, medieval, orthodox and baroque, it is another magnificent place of worship among the many that Moldova has throughout its territory. And then to continue with an amazing place, one should not miss the monastery of Ţipova, a cave-monastery that was built from the 11th century in the limestone rock 100 m above the Dniestr river. It has three levels, two churches, balconies, and rooms that communicate with each other by stairs and interior passages. This place is fascinating because of its construction, the view of the surrounding valley and the possibility to go to the foot of the surrounding waterfalls that flow into the river. These ancestral buildings are one more reason to enjoy a stay with peaceful, serene accents, a stay during which one is immersed in a secret territory, but with innumerable splendours.

Festivities all year round

A visit to Moldova also provides the opportunity to take part in cultural and festive events, which aim to celebrate the country's wealth and highlight the main places of interest. Thus, the Ia Mania festival, celebrating the popular Romanian coat in July is a great opportunity to visit Moldova and discover the gastronomic flavours and ethnographic/folkloric traditions. The National Wine Festival, on the first weekend of October, is a unique festival celebrating wine as well as popular traditions. It is held in the centre of the capital with dances, concerts and thousands of tourists. The Wine Runs, which take place in September in the legendary underground city of Milestii Mici, offer unique experiences in a surprising setting. And for lovers of nature and classical music, Orheiul Vechi is a natural amphitheatre to enjoy the beauty of classical music in the open air during the DescOPERA festival, under the June sun.

More information on the website and on the Facebook pages of Moldova: Discover the routes of life and Moldova Tourist information Center. 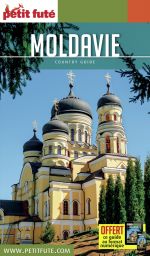 "Saint-Malo, built on the sea and enclosed by ramparts, seems, when one arrives, a crown of stones placed on the waves, ...
Read the article

At a time when our last trip is beginning to date and the next one is unfortunately no longer on the agenda, diving back ...
Read the article
Review