Although it has only been independent since 1991, Croatia, a young nation, is a country with a long and troubled history. Born of the break-up of the former Yugoslavia, the vestiges of this conflict are still numerous. But Croatia should not be reduced to this war. Young nation of the Balkans, located in front of the Adriatic Sea, Croatia becomes a major destination of tourism in Europe, a destination to visit. The country makes you dream thanks to its numerous islands on the blue waters of the Adriatic Sea that you will find in this travel guide: Krk island, Rab island, Cres archipelago... But it is also the country of a preserved and protected nature (one tenth of the territory!): mountains, forests, waterfalls, lakes, maritime areas... the Croatian natural heritage is exceptional and would be worth a stay by itself. A nature destination, all right. A cultural destination? Of course! Croatia is full of architectural treasures to visit, from different periods: Roman (amphitheatre in Pula, Diocletian's palace in Split), Middle Ages and Renaissance (monasteries and churches in Dalmatia and Istria in particular), Ottoman period, communist period, modern period... These different periods give the cities of Zagreb, Split, Pula, Zadar or Dubrovnik an astonishing and unique architecture, which must be discovered. Finally, to visit Croatia is also to immerse yourself in a little-known part of European history, to meet a people with mysterious origins, still scarred by its history, which claims a strong national identity but which joined the European Union in 2013. Follow the Croatia guide to discover this fascinating destination!

What to see, what to do Croatia? 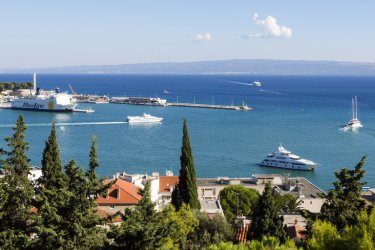 What to visit Croatia ?

When to go Croatia ?

The best time to visit Croatia is from May to September: it is a hot and sunny period

However, if you have the opportunity, you may want to avoid July and August. The Adriatic coast is experiencing an influx of European holidaymakers who are mixing with the local population. Beaches are crowded, as are historic sites and national parks, especially from July 15 to August 15

Prefer to visit Croatia in May, June and September. Most of the family tourism has not arrived or has already left, making the atmosphere less stifling. Hotels and private rentals generally apply "low season" rates

In April and October, it is sometimes a little chilly to sleep in a tent or swim, but the Croatian coast continues to enjoy bright days, perfect for hiking, although the rains are sometimes heavy

In Croatia, swimming is possible from early June to early October (water temperature between 21 and 24 °C)

In recent years, the tourist season in Croatia has extended until the end of the year and begins in spring, especially in cities with a rich cultural or gastronomic heritage. It is above all a tourism of well-being, heritage and lifestyle (discovery of Croatia, visits, hikes, sports activities, congresses, cruises, gastronomic stays, etc.)

Due to the Covid-19 pandemic, entry and travel restrictions may apply Croatia. Remember to visit the site of the Ministry of Foreign Affairs before you leave for the latest information
Practical information for travel Croatia
Formalities Budget Horaires Getting around Gastronomy

We can opt for ten days in the South Adriatic. Arrival in Split, for its central position and return via Zadar or Dubrovnik, depending on the part of the coastline and the different archipelagos one chooses to explore. A thematic stay can mix several points of interest, diving, yachting, yoga, spa/rubbing, walks and hikes in national parks, heritage visits, wine tourism/gastronomy, festivals, etc. Finding the ideal beach is also an option! In three weeks or even a month, you can travel all over the country. If possible, with a vehicle rented locally in Zagreb or Dubrovnik for more freedom. Croatia is very well equipped to welcome travellers, everywhere there are reception counters, motor vehicle rental companies, nautical professionals, etc., all tourism specialists who help to build the stay. One can also follow the recommendations of a guide.

A long weekend in Dubrovnik

Dubrovnik in one week

How to go Croatia

No problem to visit Croatia on your own. The plane is certainly the easiest way to get there. But buses, trains, roads or boats are also possible (only two countries separate France from Croatia). On the ground, Croatia is now a generally safe country. Be careful, however, in some areas: mines from the Serbo-Croat conflict may still remain. But the areas to avoid are well marked. Finally, wild camping is prohibited.

Croatia is a major destination for European tourism and can be easily visited on an organised trip or with a guide. Many tours are organized (by bus, self-tour, in group or individual, cruise in the Adriatic Sea, cultural tour...) to discover Croatia and its cities. Escapades are also possible and focus on the cities. Finally, you can also opt for an all-inclusive seaside holiday in certain resorts (Split or Dubrovnik in particular).

To travel on site, the plane may be possible (many domestic connections). The bus network is very dense (more so than the train network, which poorly serves certain regions). Croatia's steep terrain only makes these bus journeys long and uncomfortable. Sometimes it is necessary to prefer the ferry, which is faster and cheaper. With the exception of frequent police checks, travelling by car (or motorcycle) is pleasant to be completely independent.

Medimurje, stopover in the garden of Croatia

Dubrovnik, city of art and culture

Let's start in the south! On the roads of the sun, from Istria to Dalmatia, vast maritime domains parade like in a movie. It is the infinite sea, a rich coastline to be discovered by the Adriatic coast or its deep waters. If you go a little further inland into the highlands, images of great plains and mountains facing the sea appear, the kind that fans of the Game of Thrones series know well. They'll be able to walk in the footsteps of their heroes. Croatia is a young republic, with a history punctuated by the great Latin, Western and Eastern civilizations. Its cultural heritage is not overshadowed by nature. Historical monuments of all eras are in dialogue with contemporary art, living crafts, folklore, the music scene and numerous festivals. Not forgetting gastronomy, gourmet products and a wealth of souvenirs to take home in your suitcases.

In the depths of the Adriatic

In the footsteps of Game of Thrones

Diving between wrecks and caves

Antiquity, so far, so near

Until the 15th century, Croats wrote in glagolithic characters (glagoljica). The modern alphabet is in Latin and has thirty letters. However, some letters differ from our alphabet: dž, š, š, ž. In addition, the letters q, x, y and w do not exist in the Croatian alphabet or any silent letters; all letters are pronounced.

This north wind comes from Velebit, the mountainous massif of mainland Croatia, which runs along the Dalmatian coast before diving into the Adriatic Sea. Coastal cities such as Senj, Karlobag, Makarska and even Dubrovnik are subject to it. If it cools in summer, this strong wind in winter gives the feeling of losing ten degrees on the thermometer

One of the few words that the French language owes to Croatian(hrvatski) dates back to the Thirty Years' War when Croatian hussars, who came to France to enlist in the royal army, wore a white scarf on their uniforms. In 1666, the cavalry regiment was given the name Royal-Cravates by Louis XIV, born from the distortion of the Croatian name

This beautiful, world-famous dog, native to the coastal region of Dalmatia, is recognizable by its white coat with black spots. Bishop Petar already described it in 1374. Trained to attack horses, it was used in the wars against the Ottomans. Dalmatian appears on some coats of arms of Croatian noblemen.

Alphabet invented in Croatia in the 9th century by two Greek monks, Saint Cyril and his brother Saint Methodius. The Croats were the only European Catholics authorized by the Pope not to use Latin. The first missals in glagolitic characters were printed in 1483. This alphabet lasted in Croatia until the end of the 15th century

As in Italy, coffee (espresso, cappuccino, latte macchiato) can be drunk at any time of the day, and the terraces are often full. Here we say kava. Even on working days, people take coffee breaks at bars and restaurants near their workplace. At home, it can be prepared Oriental (or Turkish)

We often hear this traditional Dalmatian a cappella song on the radio, through the windows. These polyphonies, mainly composed of men, are often repeated in churches. They perform on the street, in squares during festival periods. Sometimes, some elders push the klapa on the terrace of a café during a family gathering

Even if the tradition is lost, there are still bars where you will see the word appear in front. Around 10:00/11:00, we go out or prepare a nice salty snack. A sandwich of cold cuts, cheese or fish, which allows early risers to take a late morning break. Today's marenda could be akin to brunch..

A liqueur obtained with sour cherries called marascas. Balzac, in A Beginning in Life, talks about Zadar, the "city where maraschino is made". In Europe in the second half of the 19th century, it was highly prized. Other evidence of the popularity of this Dalmatian alcohol at Baudelaire and even at Napoleon Bonaparte's table.

All along the Croatian coast, in Istria, on the islands, many beaches and coves are dedicated to naturism. The former King of England Edward VIII and Wallis Simpson are said to have set the trend. The acronym FKK (Freikörperkultur) indicates these protected areas. There are naturist campsites, equipped with modern infrastructures such as holiday villages

On the island of Pag, this hard sheep's cheese is made. It is rolled in ash and olive oil and then matured. The taste also comes from the milk of the sheep that feed on aromatic herbs and sea salt. Often enjoyed as an aperitif, as an appetizer (antipasti), it is served with smoked Dalmatian ham (pršut), bread and wine.

With advances in electronics, the number of brave lighthouse keepers is shrinking. As a result, the accommodation is gradually being converted into holiday cottages for holidaymakers with a thirst for solitude and sea air. A boat brings them to the site with the races for the week and comes back to pick them up on the desired day. The lighthouse keeper can help out if necessary

In the summer, you rent your house or apartment to tourists and go squatting with the family

At the sea, you move pebbles to make a path in the water without sea urchins.

You leave your towel on the rocks when you leave for lunch or at the end of the day. There are no thieves in the sea!

You eat your cheese as a starter (antipasti) and in summer you prefer fresh red wine from the fridge.

At the beginning of a boat trip, you drink the shot of rakija offered by the captain. Effective against seasickness, good for conviviality.

You don't get on the bus in a bathing suit with a towel on your shoulder.

You cover your shoulders in churches and monasteries.

You know that the break-up of the former Yugoslavia is a sensitive subject. Some will talk about the war of independence, others about the last war, some praise the memory of Tudjman, others call him a fascist