Abu Dhabi - "Father of the gazelle" in Arabic " refers to both an emirate of the United Arab Emirates and its capital, also the capital of the federation. Located in the Persian Gulf, facing Iran, this emirate covers 80% of the U.A.E. Like the other capitals of the Gulf, Abu Dhabi, the city, is identifiable by its forest of futuristic skyscrapers. Dubai is shading it, but more and more tourists are choosing Abu Dhabi's beaches. The seaside pleasures and luxury of the designer boutiques are now matched by the grandiose cultural offer of Saadiyat Island, the island of museums, which saw the opening of the Abu Dhabi Louvre in 2017. A pharaonic work by Jean Nouvel, whose Galleries present the history of humanity in twelve chapters, from prehistoric to contemporary art. In addition, there are four temporary exhibitions also mounted with France. Another must-see masterpiece is the sumptuous Sheikh Zayed Mosque, one of the largest in the world, with a capacity of 40,000 worshippers. In a playful atmosphere, families enjoy the huge Yas Waterworld water park. But perhaps the most fabulous discovery will be the 6-star Emirates Palace Hotel, with its limitless luxury, which even has its own distributor... of gold. You will also have to reach Al Ain, the emirate's second largest city, in its oasis in the middle of the vast Abu Dhabi desert. Forget the international cuisine of hotels for traditional rice and fish dishes, topped with cinnamon, saffron, turmeric, nuts and dried limes.

What to visit Abu Dhabi?

When to go to Abu Dhabi?

It is in winter and particularly in February, during the high tourist season, that most of the many events are scheduled. During the end of the year holidays and during the Formula 1 Grand Prix, hotels are sold out and sometimes double their rates! The same trend is observed during religious holidays such as Eid, other world-class sporting events and major international trade fairs. However, the hotel offer has increased considerably and several luxury or mid-range hotels offer very attractive prices from the mid-season, after the Christmas and New Year holidays. It's up to you to do your shopping on the Internet and compare prices. In the middle of summer, the heat wave melts prices and you can buy a palace for the price of a 4-star hotel. The same applies during the Ramadan period, when the country is running at a slightly slower pace and is experiencing a significant reduction in the services usually offered: reduced means of transport, restaurants and bars in the centre closed during the day, reduced opening hours for monuments. The best time to go to Abu Dhabi is during the off-seasons: autumn and spring. The temperatures are still pleasant.

Abu Dhabi's climate is subtropical and arid. Mild and sunny winter with an average of 24°C (10°C to 30°C) and cool nights, especially in the desert and mountains. It is the high tourist season. The coldest months are December, January and February. Possibility of scattered rains and rare sandstorms. Summer (May/September) hot, even hot in July and August, and humid. Temperatures range from 30 to 51°C and can exceed 55°C! It's the low season

The cost of living in the Emirates is much the same as in Paris and luxury is very much in evidence. Shopping is a local sport and good deals are possible in branded brands. If hotels during the high tourist season are on the rise, conversely you will find attractive prices during the off-season. Car rentals and especially public transport are cheaper than in France

French nationals are exempt from visa requirements. A stamp affixed to the passport on arrival at Dubai and Abu Dhabi airports allows a maximum stay of 90 days, on one or more occasions, over a period of 180 days from the date of the stamp. Your passport must be valid for at least 6 months from the date of entry into the UAE. Imported newspapers, videos and DVDs are subject to censorship. The complete list of products banned for import into the United Arab Emirates can be found on the website of the French Consulate in Dubai.

The hospital system in the United Arab Emirates, particularly in Abu Dhabi, is modern. French or French-speaking doctors work in many medical or hospital centres whose contact details can be provided, if necessary, by the French Embassy. Here the enemy is the sun. It is important to be well protected from it. Also ensure your road safety.

How to go to Abu Dhabi? Our advice & tips

This popular tourist destination now offers a wide range of turnkey stays. You will find on the Internet a very wide offer, in all seasons, and for all budgets. A week's stay at the hotel with half board is the most common. This formula is particularly interesting for families who are the darlings of the destination.

You can take a dry flight ticket and book your hotel on the Internet without any worries. On the spot you can manage on your own. The city is organized in the American way, grid by blocks, in a rather logical way. It is therefore easy to find your way around. And don't forget that you are in a country subject to Sharia law. On the beaches, nudism and monokinis are strictly prohibited. During Ramadan, it is forbidden to eat, drink and smoke in public, from sunrise to sunset.

We advise you to rent a car if you want to travel around the country, but to use taxis to discover the city. While walking can be considered in winter, in summer, it is impossible. In addition, vehicle air conditioning is essential. A bus network serves all the districts. Finally, you can take the Big Bus for a sightseeing tour in the city.

Prepare for your trip Abu Dhabi

Abu Dhabi, the time of a long weekend

Around the emirate in a week 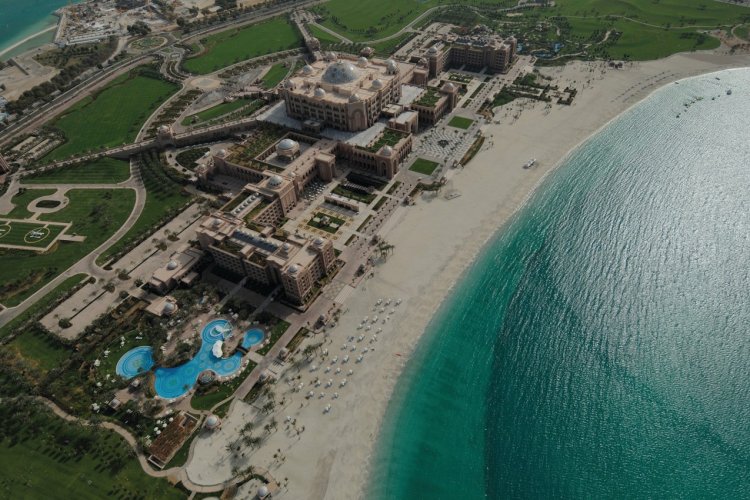 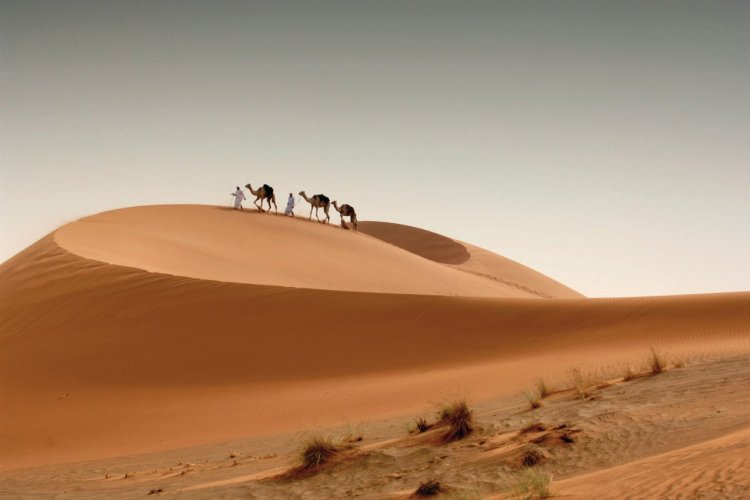 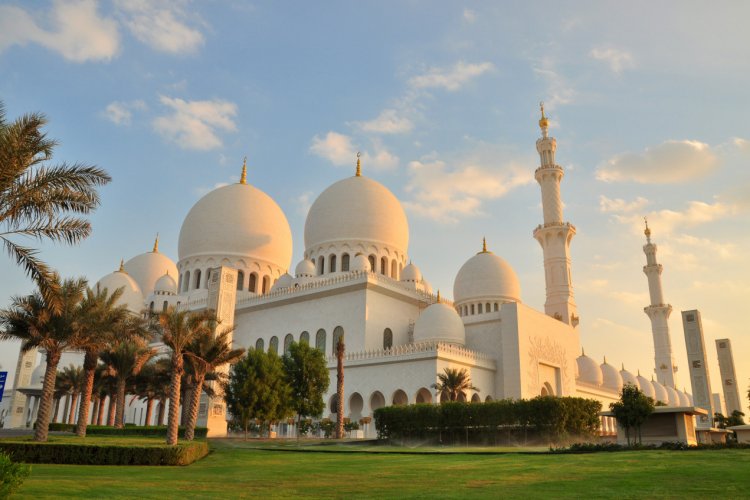 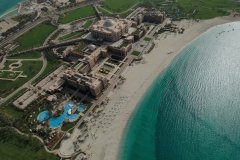 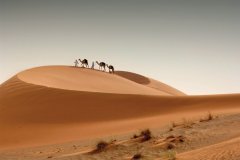 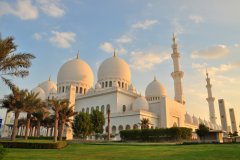 It is in winter and particularly in February, during the high tourist season, that most of the many events are sched...
Read more about it

Abu Dhabi's climate is subtropical and arid. Mild and sunny winter with an average of 24°C (10°C to 30°C) and cool...
Read more about it

The cost of living in the Emirates is much the same as in Paris and luxury is very much in evidence. Shopping is a lo...
Read more about it

French nationals are exempt from visa requirements. A stamp affixed to the passport on arrival at Dubai and Abu Dhabi...
Read more about it

The hospital system in the United Arab Emirates, particularly in Abu Dhabi, is modern. French or French-speaking doct...
Read more about it

You can take a dry flight ticket and book your hotel on the Internet without any worries. On the spot you can manage...
Read more about it

This popular tourist destination now offers a wide range of turnkey stays. You will find on the Internet a very wide...
Read more about it

We advise you to rent a car if you want to travel around the country, but to use taxis to discover the city. While wa...
Read more about it

10 reasons to love Abu Dahbi:1. Step back in time at the Jebel Hafit Desert Park 2. Discover the Louvre Abu Dhabi in a different way: kayaking and yoga under the dome 3. Go deep into the mangrove swamps at the Jubail Mangrove Park4. Chill out in a campervan on the beach5. Experience an ecotourism safari to the East on Sir Bani Yas Island 6.Marvel at the fossil dunes of Al Wathba7. Observe the stars in the heart of the desert at the Milky Way ...

The world's top 10 attraction parks: have your heart clinging!

Much crazier than Mickey and Asterix parks combined, these amusement parks do not hold records for visits but are well worth a visit! If the United States wins the prize with theme parks, each more crazy than the next, the old continent also has real pearls. Petit Futé takes you to discover the most amazing amusement parks in the world for children, but especially for adults! N ° 10 - Wunderland Kalkar - Dusseldorf, GermanyAs a symbol of ...