Travelling through France on a motorcycle offers the possibility of travelling along roads that reveal a wide variety of landscapes. Head to the west of the country to enjoy the Atlantic coastline, its beaches, its charming towns and its historical sites offering a gentle journey through time. From Noirmoutier to the Marais Poitevin, the route never ceases to fascinate motorcyclists, who are keen to stop and breathe in the sea air and rest on the beach, but also to sit on a terrace facing a port to enjoy some seafood. To vary the atmosphere, they then move away from the coast to observe some monuments in detail, until they end up going by boat into the unavoidable marshes, and enjoy a rich biodiversity

The Vendée is a department where it is good to venture out on a motorbike when the weather is fine. The roads allow you to feel at one with nature, whose wet soils feed a green flora, and whose specificities are immediately recognizable by its proximity to the Atlantic Ocean. After renting a motorbike from the Yamaha Rent La Roche-sur-Yon agency, head for the neighbouring island of Noirmoutier, the pearl of the Vendée. The island is an ideal starting point for a few days' motorbike tour, and it's hard to resist the urge to explore it from one side to the other to discover its countless treasures. From the pretty port of l'Herbaudière, which combines fishing boats and pleasure craft, you can enjoy riding along the salt marshes and observing the small mountains of salt, before finishing with a picnic and a gentle stroll in the Bois de la Chaise. The Dames beach and its white cabins, the more intimate Anse Rouge beach with its translucent waters, are all places to settle down on a towel and take a swim on the hottest days.

In Noirmoutier, the stay can start with a night spent at the Fleur de Sel hotel and restaurant. This is halfway between the port of Noirmoutier and the beaches of Bois de la Chaise. In addition to sleeping in a refined room that breathes the seaside, the proposed cuisine, gastronomic and which revisits traditional flavors, is composed from the morning peaches and harvests of the market gardeners.

Once you have passed the famous Gois passage at low tide, which is ideal for enjoying the spectacle of the receding sea, head for Saint-Gilles-Croix-de-Vie for the pleasure of strolling around its charming port, but also to reach the unmissable Adon lighthouse and thus benefit from a panoramic view of the channel and the Garenne dune. Nearby, Saint-Hilaire-de-Riez is a great opportunity to take sublime shots of the Corniche vendéenne and its wild, rocky coastline

Moreover, in Saint-Hilaire-de-Riez, a gourmet break can be taken at La Cabane des 5 Pineaux, for the pleasure of tasting mussels, a back of cod with potatoes or even sardines from Saint-Gilles with your feet in the sand. To spend a few nights, Les Sables-d'Olonne offers a very pleasant residence: Les Océanes. The accommodation is modern and there is also a small swimming pool to cool off in

On any other day, a visit to Les Sables-d'Olonne is almost a matter of course. The lively town, which is directly open to the sea, is definitely worth a visit. You will discover its remarkable heritage with the Saint-Nicolas fort built in the 11th century and the 17th century Sainte-Croix abbey, which today houses the Museum of Modern and Contemporary Art. And how can you miss the Île Penotte district, so captivating and picturesque with its facades of houses covered with mosaics with multicoloured shells. In addition, there is no need to worry about parking your motorbike safely in the town or to go to a specialised shop to buy any missing equipment!

To spend a few nights, Les Sables-d'Olonne offers a very pleasant residence: Les Océanes. The rentals are modern and in addition, a small swimming pool is available to cool off.

After enjoying Les Sables-d'Olonne, a trip to the heart of one of the most historically significant parts of the Vendée heritage is recommended: a visit to the ruins of the castle of Talmont-Saint-Hilaire. A powerful medieval building whose first fortifications date back to the 11th century, the contemplation of its ruins, of the nature which takes over and the discovery of its history offer a real journey back to the past centuries

Then back along the coastline to enjoy a Great Natural Site not to be missed during a motorcycle road trip in the Vendée. This is the Payré estuary, a harmonious mix of oyster beds, salt marshes, pine and holm oak forests. The translucent lagoon of the Veillon beach and the possibility of numerous nautical activities make it a choice stopover to vary the pleasures and to stretch out between two motorcycle rides.

In Talmont-Saint-Hilaire and the Payré Estuary, it is difficult to resist eating oysters facing the sea, and to taste a refined cuisine based on fresh and local products, the restaurant Les 3 Loups de Mer offers a market cuisine where you can find prawn acras or hake in tarragon sauce. To sleep, it is possible to go inland and stop off in Luçon to spend one or two nights in the guest house La Villa des Roses, where three rooms are located in a sublime 1930's Art Deco style house, with a swimming pool in the garden.

Before plunging into the heart of the Marais Poitevin, another interesting stage is the one that takes place at the foot of the abbey of Maillezais. Although the abbey which welcomed Rabelais between his muses and which celebrates the Romanesque, Gothic and Renaissance styles is now in ruins following the wars of religion, it is certain that it is far from having lost its superb appearance. Church become cathedral, we can even say that a passage on this site is a great moment of emotion.

The trip ends with the second largest wetland area after the Camargue and classified as a Grand Site de France. The Marais Poitevin, a real green Venice, is an exceptional place between land and canals. 320 km of navigable waterways that can be crossed on board a boat, and as you go along, the peace and quiet of the place is sometimes broken by the sounds of migratory birds, otters, deer or other coypu, who also appreciate this place where time has no hold. For those who wish to do so, the Marais Poitevin park also offers a beautiful loop on a motorcycle with curves and straight lines and always bucolic landscapes.

Nearby, a nice place to stay is in the commune of Saint-Michel-en-l'Herm. The Basse Brenée guest house has a variety of styles, from rustic to nautical, and is housed in an elegant 18th century cereal farmhouse. 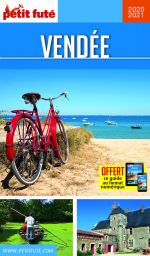 The Marais Poitevin, this mysterious territory..

To the east of the Parc naturel Régional du Marais Poitevin, an immense wetland, is a landscape forged by a delicate ...

The Vendée, between land, sea and marshes

Which is the most beautiful beach in France? Everyone can have their own opinion on this question, especially since ...