The Lot department has all the makings of a great department. It draws its character from its causses carved by the valleys of the Lot, the Dordogne and the Célé. With its six most beautiful villages in France (Carennac, Loubressac, Autoire, Saint-Cirq-Lapopie, Capdenac-le-Haut and Cardaillac), its large sites, a preserved environment and exceptional natural spaces, the territory is a must in the Occitanie region, as all tourist guides indicate. You must discover Rocamadour clinging to the cliff, Gourdon perched on a hill, Cahors and its Valentré fortified bridge, Figeac and its Champollion-Les Écritures du monde museum, Saint-Céré and its Renaissance houses, Puy-l'Évêque to be contemplated from the bridge to see the succession of castles, churches and large houses of the 14th and 15th centuries... Man and nature have left their traces in the cave of Pech Merle, the abyss of Padirac, the cave of Lacave, that of Merveilles or of Presque. The valleys of Célé, Verse or Ouysse offer tourists the opportunity to hike, swim, canoe and discover beautiful small villages. Rural architecture is typical with its dry-stone walls, its cazelles (dry-stone shepherd's huts), its carts, its wash houses... Land of excellent local products and gastronomy, the Lot awakens the taste buds with truffles, foie gras, farm lamb from Quercy, melon from Quercy, rocamadour, saffron or Cahors and malbec wines

What to see, what to do Lot? 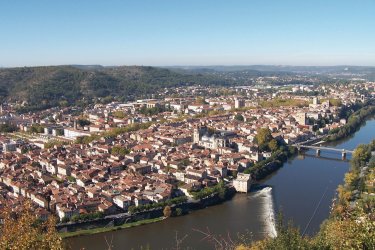 What to visit Lot ?

When to go in the Lot? Summer is the best time to enjoy the rivers, follow tours in the valleys of the Dordogne, Lot or Célé, explore the Causses du Quercy regional nature park, visit the Cahors vineyard or discover the most beautiful villages. The Lot also invites you to experience the rhythm of major events, whether it is to enjoy the Rocamadour cheese festival at the Pentecost weekend, or the Lot of Saveurs in Cahors, in early July, to attend the Cahors Blues Festival, where most concerts are free, the Souillac Jazz festival, the Happy Days music in Gourdon or the Théâtre de Figeac festival in late July and early August, to participate in contemporary music concerts at the end of July during L'Ecaussystème in Gignac, to listen to a famous opera at the end of July and beginning of August during the Saint-Céré festival or to take a look at the Mongolfiades, a European gathering of hot air balloons that takes place on the fourth weekend of September in the breathtaking site of Rocamadour.

There are many ways to meet this department, many ways to understand it and experience its authenticity. To get a taste of Quercy, a weekend will certainly not be enough but will make your mouth water! There is no shortage of ideas for a stay in such a complex department. We have selected for you a few travel themes, crossing axes that open up many other fields of possibilities. Whether it is for its wine, its art of living of yesteryear or its underground world, the Lot never ceases to prove its multiplicity. We offer you a three-day trip to discover the vineyards of the Lot via a north-south crossing.
Would you like to spend a short weekend with your family? Then why not immerse yourself in the Quercy of yesteryear thanks to two sites to discover 19th century life! Finally, come and take the temperature of the underworld! Are you following us?

The peasant Lot of the past

Caves and chasm of the Lot

Abyss of Padirac: a reminder of a unique place in France to be discovered as soon as it reopens

Reopening of the Gouffre de Padirac discovered 130 years ago

After four months of winter closure, the Gouffre de Padirac is preparing for a new season and will welcome its first visitors on Saturday, March ...

When you mention Cahors or Rocamadour, gustatory memories come back with the AOC wine made from Malbec grapes and the small round cheese. In the Quercy Blanc, along the Lot Valley, on the heights of the Causses or in the forest of the Bouriane, the men and women who were born or settled there have allowed the development and transmission of their know-how. To discover the Lot is also to follow its hiking trails, to enjoy its gentle way of life, and to be enriched by the History through its impressive monuments and the traces left by its inhabitants, some of whom were several meters high in the Jurassic era.

While preserving its heritage, the Lot knows how to live with its time. The cultural events that take place throughout the year in theaters, castles, concert halls or streets offer unforgettable moments. You want to know more? It's here...

Champollion and the Rosetta Stone

The black triangle of Quercy has been recognized since a 2002 publication by the astronomy monthly Ciel & Espace. A map shows a triangular zone between Labastide-Murat, Livernon and Sauliac-sur-Célé; zone recognized for the quality of depth and limpidity of its nights. A privileged place to observe the nocturnal stars.

How do you put a city in a bottle? Ask Cahors who gave its wine its name and appellation. Made from the Malbec grape variety (also known as Côt and Auxerrois, but you mustn't say so!), Cahors wine was once called "the wine of the English". Today, it is known throughout the world for its qualities

The South-West, it is well known, is a duck paradise! It is eaten as magret, sausage, confit, pâté... Many recipes help to magnify this product and the local gastronomy also confers its letters of nobility to the duck bones which are tasted with the hands after having melted the duck in a copper cauldron

The Caussenarde du Lot is a rustic endemic breed of sheep. Its main characteristics are its ears and its dark glasses. We owe him the famous Quercy lamb. It has been raised for a very long time on the limestone plateaux of the Lot. Today there are about 110,000 females, mainly bred in the Lot department.

As is often the case, stories of bridge building are linked to the Devil's intervention. The story of the Valentré bridge in Cahors is no exception and offers several versions. You will be able to make up your own mind by visiting this magnificent 14th century structure. Don't miss the small sculpture of the Devil on the2nd tower!

The mique lotoise is a family recipe which always seduces as much. It is based on a bread dough, a little salt and vegetables, all cooked slowly in a broth. At the restaurant or at home, this traditional dish gathers generations and rhymes with sharing and good mood. The tradition wants that the mique is cut with two forks

The department's rivers have enabled its economic development thanks to the transport of goods on river gabares, these flat-bottomed vessels have sailed the Lot and Dordogne rivers for centuries. Nowadays, the gabares are once again on the rise! They have been brought up to date for tourism in order to offer walks.

You will see them all over the Lot countryside. They are small circular huts built in dry stone. In the past, they were used as shelter for the shepherds who looked after the flocks of Caussenard sheep. Today, they are part of this small heritage that we love and which gives all its charm to our countryside.

The Lot, a nutty department? In any case, you will find the walnut of Périgord in Martel, AOC since 2002 and AOP since 2004. The walnut in the Lot is not new, as traces of walnut shells have been found dating back 17,000 years! Today, they are notably intended for consumption in cooking and pastry making.

The GR 65 linking Le Puy-en-Velay to Santiago de Compostela (the via Podensia) passes through the Lot and allows pilgrims to choose between two routes, one linking Rocamadour, the other the Causses. The city of Cahors is also crossed by the path that leads pilgrims to the Cathedral of Saint-Etienne, the highlight of the city.

We find the trace of man since Prehistory as in the cave of Pech Merle in Cabrerets. The cave has no less than 700 painted or engraved motifs such as the famous "stencil hand" or the "punctuated horses". The caves of Cougnac in the Gourdonnais also have prehistoric paintings (mammoths, deer, etc.)

The Latin name of the Quercy black truffle is a mark recognized by fine gourmets, not to be confused with other truffles that resemble it but are not equal to it. In winter, it is sought after as a treasure in the limestone soil of the Lot. Its price can reach 1000 € per kilo. It is sold on specific and well codified markets.

Your accent is neither Marseilles nor really Toulouse, but it breathes the sun!

In your vocabulary, you've definitely replaced the word "turn" with "tour" and plastic bag with "pocket". In the same way, you don't have a trunk in your car like everyone else but a "trunk"!

You integrate Occitan words in French such as "pétasser" to say repair, "rouméguer" to grumble or "poulide" for pretty

For you, Brive is one of the "northern" cities above it is another country. Above the Loire, another continent!

You have been raised on duck bones, fed with Cahors wine

Your school outings have invariably taken you to the Pech Merle cave in Cabrerets, the Cuzals Museum in Sauliac-sur-Célé or the Automaton Museum in Souillac.

In your gaze, there is always a piece of the Lot, laid out on the paths that meander among the oaks and chestnut trees.