South of the Massif Central and in the centre of the Toulouse/Clermont-Ferrand/Montpellier triangle, this department covers approximately the former province of Rouergue. Around Rodez with its cathedral and the Soulages museum, and Millau and its viaduct, which sees the A75 motorway perched above the Tarn valley, it is one of the largest in metropolitan France (8,700 km²). A green medium mountain terroir, Aveyron offers magnificent landscapes where herds graze. The Grands Causses limestones, the Rougiers de terre rouge and the marls are all typical geological formations of this country where the high rocky plateaus are carved out of deep valleys by the Truyère, Lot, Aveyron and Tarn rivers. There is the volcanic and granitic Aubrac, the mountains and lakes of Levézou, the Rougier de Camarès, the Larzac and its sheep, the gorges of the Tarn, the Marcillac wine-growing valley. You will be amazed! Among the villages of character, we can mention Laguiole, at an altitude of nearly 900 m, in Aubrac, where raw milk cheese and artisanal knives of the same name are made. In the lands of Aveyron, there is no shortage of animal sites: Micropolis, city of insects, on the Lévézou, the animal park of Pradinas, the Garden of the Beasts of Pages (Montrozier), the Reptilarium of Larzac, Pastoralia, dedicated to the world of sheep and pastoral life (Saint-Affrique), or the Maison de la Cabrette et des Traditions. And on the table: aligot, roquefort, tripe, estofinado, cheese soup, spit cake, Millau flauna...

What to see, what to do Aveyron? 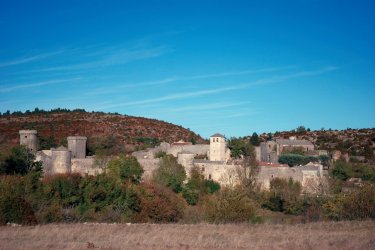 What to visit Aveyron ?

When to go Aveyron ?

Here passes the Way of Compostela, which sees pilgrims marching all year round and many hiking trails that reveal magnificent landscapes. But it is summer that is the high tourist season. All the establishments are open, camping is possible, even on the plateaus, cultural activities and village festivals are numerous. The transhumance in Aubrac, in particular, gives rise to beautiful festivals. Rural tourism, green tourism, cultural tourism and outdoor activities : Aveyron offers you a breath of fresh air and greenery, authenticity and landscape in all four seasons. It would be a shame to confine ourselves to the high summer tourist season. Spring is a beautiful time, with the plateaus and their pastures blossoming and autumn colouring the forests. Even winter has its attractions. The landscapes and the air are very pure and there is always a small country address open all year round to welcome you with warmth because make no mistake about it, it is very cold in the causses. At the end of October, it is the Templar Festival, one of the largest gatherings of trailers in the world in the sumptuous setting of the Grand Causses. Running enthusiasts from all countries compete on more or less dangerous and vertiginous routes.

The Aveyron, with its charming villages

Aveyron impresses by its natural sites: red earth and lava flows, causses and peat bogs draw unusual landscapes. Walk through the caves and canyons, follow the gorges, discover the plateaus of Larzac or Aubrac. Visit the castles and the road of the lords of Rouergue. Discover the most beautiful abbeys and the cellars where the Roquefort cheese, which has had an AOC since 1925 and whose blue colour comes from the addition of Penicillium roqueforti yeast from the rye leaven, is matured. Among the original experiences are a visit to the Musée du Scaphandre, the discovery of the large cattle market in Laissac, the local history lesson given by the boatmen of the viaduct and the making of a Laguiole knife with a cutler. This area also has its share of unusual accommodation in the trees, in trailers, teepees, eco-camping, bubbles under the stars, glamping...

Aveyron is the authentic department par excellence. Large preserved spaces, a rigorously maintained historical heritage, the priority given to organic or integrated agriculture, and, beyond that, a very strong link between people and their territory, give Aveyron this true and generous character that tourists like so much

If the Soulages Museum, inaugurated by François Hollande in 2014, has put the spotlight on Aveyron, culture was already very present in the life of the Aveyron people before it. Through a few major festivals, but above all through the action of a multitude of actors, all over the territory, who sing, dance and play on a daily basis.

The discovery of Aveyron gives birth to multiple emotions. One marvels at the cathedral of Rodez or the abbey church of Conques. We are subjugated by the prowess of the architects of the Millau viaduct. You can be scared by the via ferrata, paragliding or canyoning. And you will find serenity in front of the masterly landscapes of the Aubrac.

Aveyron's gastronomy is a heritage and the department's restaurateurs are its guardians. Lovers of good products - local if possible - they maintain this culinary heritage through high quality menus, which give pride of place to local specialities: charcuterie, aligot, truffade, estofinade, local cheeses...

Nature is still predominant in Aveyron. Through two regional natural parks, Aubrac and Grands Causses. Through an exceptionally rich fauna and forest. And also through structures (Maison de la cerise, de la châtaigne, de la truffe...) which here and there defend and promote the products to which nature has given birth.

Bowling is to Aveyron what pétanque is to Marseille: an institution! The game was codified around 1912 by the Aveyronnais of Paris and championships are, since, organized.

The shots are made at several imposed distances (from 1 to 20 m), with a ball with handle weighing from 3,5 to 6 kg and a less heavy "playing" pin.

Crossed by the famous road to Santiago de Compostela, Aveyron is a great place for hiking. Hundreds of kilometers of trails wind their way through the mountains and valleys, gorges and plateaus of the region. And many professionals are on hand to help you discover all their resources.

It was after the Revolution that Rouergue became Aveyron. But the term Rouergue is still very much alive in the daily vocabulary of the inhabitants of the department. It is a rough name which comes from a Gallic tribe, the Rutènes, settled on a vast territory going from Aubrac to Larzac, from the Montagne Noire to the Cévennes and the Gévaudan

Aveyron is the first sheep-farming department in France. And agriculture is particularly efficient, notably because of its famous sectors (Roquefort, Aubrac beef...). Beyond this farming dimension, the territory has remained predominantly rural. An identity that nourishes the minds and local public policies on a daily basis.

Solidarity characterizes the inhabitants of the territory, who stick together in all circumstances and help each other to succeed. This is particularly true for the Aveyronnais in Paris (there are an estimated 350,000 of them in the capital!), who are famous for their close-knit network and their annual meeting in October for the Marché des pays.

In addition to the traditions linked to gastronomy, Aveyron remains attached to its local history. Through folklore groups, the museums of Montrozier (archaeology) and Salles-la-Source (arts and crafts) and certain events (Estivada, sheep festival, agricultural fairs, etc.), Aveyron customs are shared with the general public.

Authenticity, quality, passion, conviviality, but also pugnacity, reliability and respect are among the intrinsic values of Aveyron. They are notably defended through two precious tools: the "Made in Aveyron" label and the shared brand "Aveyron Vivre Vrai", supported by Aveyron Ambition Attractiveness.

You don't shy away from a good breakfast with a fork: tripous or calf's head at 8am, accompanied by a barrel of red wine!

You eat chocolatines - and certainly not pains au chocolat!

You have a singing accent; the same as a certain Jean Castex. The same as Cyril Lignac, the famous chef.

You know that aligot is prepared with fresh tomme cheese (yes, it doesn't go with a classic emmental!).

You have already caressed the very masculine attributes of the Laguiole bull statue. A tradition that brings luck, it seems...

Besides, Laguiole is pronounced "Layole".