What to see, what to do Istria? 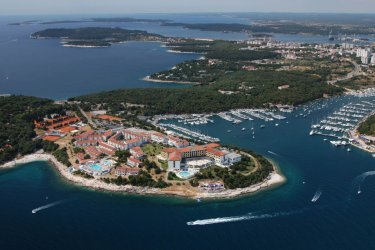 What to visit Istria ?

Due to the Covid-19 pandemic, entry and travel restrictions may apply Istria. Remember to visit the site of the Ministry of Foreign Affairs before you leave for the latest information
Practical information for travel Istria
Formalities Budget Horaires Getting around Gastronomy

Around Istria, the reasonable distances between each border, some 50 kilometres, make it possible to make incursions into several countries without major detours. To the north, from Zagreb, there are Hungary, Austria, Slovenia and Italy. To the east, Serbia, to the south, Bosnia-Herzegovina and Montenegro. These border territories with striking similarities all have their own identity. For Croatian, Slovenian and Italian Istria, there is a choice, whether one comes from Zagreb, Ljubljana, Venice or Trieste.

It is also a destination in its own right in Croatia with its cultural peculiarities. Easily accessible from France by road, by air (airports of Pula, Rijeka, Venice) or by boat via Italy, Istria alone can be the subject of a stay of a week or more, to land in one of the wellness establishments along the coast.

Istria, the enchanted peninsula of Croatia

Istria: idleness, hiking and wine route, the region of Croatia where everything is possible

It is often said that Istria is a concentrate of Croatia! As much for its natural environment as for its culture. At the same time, Istria enjoys this Italian, Slovenian and Croatian belonging. So the prosperous peninsula would see itself much more autonomous, regionalism is active there. The Istrian identity is therefore multiple, just like its soft language which plays with Slavic and Latin consonances. From the climatic point of view, the temperate zones are more continental in the northern pre-Alps and frankly mild on the whole Mediterranean coast, which benefits the biodiversity, the agriculture, the seaside tourism and the agrotourism. Its historical heritage admirably highlighted, the arts and popular traditions alive, the generous gastronomy without forgetting the dolce vita constitute as many arguments for the vacationers in Croatia. They can easily spend a week or more in Istria.

Until the 15th century, Croatians wrote in glagolitic characters. The modern alphabet is in Latin and has thirty letters. However, some letters differ from our alphabet: đ, š, ž. Moreover, the letters q, x, y and w do not exist in the Croatian alphabet, nor any silent letters; all letters are pronounced

Istria was the first territory of present-day Croatia to be colonized by the Roman Empire. Under Augustus it became the Regio X Venetia and Histria, the 10th administrative region of Italy. The cultural heritage lives on, especially in Pula, where regular festivities in costume, shows, entertainment and gastronomic events bring this past to life.

This north wind comes from the Velebit, the mountainous massif of mainland Croatia, which runs along the Dalmatian coast before plunging into the Adriatic Sea. Coastal cities such as Trieste, Pula, Rijeka and all around the Dalmatian coast are subject to it. Although it refreshes in the summer, this violent wind in winter gives the sensation of losing ten degrees on the thermometer.

L'accessoire is one of the few words that French owes to Croatian(hrvatski). Its origin dates back to the Thirty Years' War when Croatian hussars, who came to France to support the monarchy, wore a white scarf on their uniform. In 1666, the cavalry regiment was given the name Royal-Cravates by Louis XIV, hence, by distortion, the name Croatian.

From the Greek gastro and nomia, knowledge of dishes. It's not an empty word in Istria. On the calendar, many convivial events are dedicated to local foods and recipes: herbs, seasonal fruit and vegetables, mushrooms, truffles, honey, cheese, meat and sausages, fish and seafood, pasta, risotto ravioli, gnocchi.

On the Croatian flag, with the Yugoslavian colours (horizontal red, white, blue stripes), one must mark its historical coat of arms in the centre. The red and white checkerboard is surmounted by five small shields forming a crown, which symbolize the five components of the country. The Istrian one is represented by the Istarka goat, with red horns and hooves on a blue background.

As in Italy, coffee (espresso, cappuccino, latte macchiato) can be drunk at any time of the day. Here we say kava. Even on working days, people take coffee breaks in bars and restaurants near their workplace. At home, it can be prepared in an oriental way.

Even if the tradition is lost, there are still bars where you will see the word appear in front. Around 10/11 h, you go out or prepare a salty snack. A sandwich of cold cuts/cheese or fish allows early risers to take a break at the end of the morning. Today's marenda could be akin to brunch.

All along the Croatian coast, on the islands, beaches and coves are dedicated to naturism. The king of England Edward VIII and Wallis Simpson would have launched the fashion. The sign FKK(Freikörperkultur) indicates these protected areas. In Istria there are naturist campsites, like holiday villages in Vrsar, Rovinj, Umag, Poreč and Funtana.

Croatian tourism accounts for 20% of the national GDP, which is a major economic activity, and it was in the Istrian-Kvarner region that it all began in the 19th century, with the arrival of the Austro-Hungarian aristocracy. In Opatija, the Villa Angiolina, which was one of the first princely bathing residences, a museum of tourism was opened.

In Istrian gastronomy, the truffle is by far the most famous! Near the Slovenian border, in Buje, we are proud to recall that it is here, in the countryside, that a farmer found the biggest in the world: 1.3 kg. Every year, the Truffle Days are dedicated to the mushroom and every good Istrian chef/restaurateur introduces it to the menu.

While Istrian olive oils are gaining in excellence every year, Istrian wines have a longstanding reputation. Among the region's star varieties are the dry white Malvasia istriana, the moscato momiano (Momjan muscat), the red teran , a variety indigenous to Istria. To do: the wine and oil route.

... In the summer, you rent your house or apartment to tourists and go squatting with the family

... At the sea, you move pebbles to make a path in the water without sea urchins

... You leave your towel on the rocks when you leave for lunch or at the end of the day. There are no thieves in the sea!

... You eat your cheese as a starter (antipasti) and, in summer, you prefer fresh red wine from the fridge !

... At the beginning of a boat trip, you drink the shot of rakija offered by the captain

... You don't get on the bus in a bathing suit with a towel on your shoulder

... You cover your shoulders in churches, monasteries

...you don't feed the seagulls that gut public garbage cans.

... You know that the break-up of the former Yugoslavia is a sensitive subject. Some will talk about the war of independence, others about the last war, some praise Tudjman's memory, others call him a fascist