The Jura, winter sports and crafts

In Burgundy-Franche-Comté, the Jura is one of the most complete tourist destinations in France. And winter is without doubt the promise of a wonderful stay

The Jura, the white paradise

At the time of the first cold spells, when the snow will soon cover the Jura landscapes, it is time to consider a trip to this enchanting department. In winter, snow sports enthusiasts will find plenty to enjoy. In the Jura massif, downhill skiing is mainly practised in Les Rousses for the Jura department, in Métabief for the Doubs department, and in the Dôle massif for nearby Switzerland, thus offering vast and particularly well-equipped areas, with various rates adapted to all levels and all desires, including a Franco-Swiss pass as the areas border each other. There are also small family resorts in Morbier and Bellefontaine and ski lifts where children and beginners will have a good time in several places such as Longchaumois, Lajoux, La Pesse... For those who like to go for a walk, apart from the unavoidable snowshoe walks, the Jura's relief lends itself wonderfully to cross-country skiing in all its forms: classic" skiing, in alternating steps on specially marked tracks; "skating", in skating steps, on the groomed surfaces of the cross-country trails; and finally Nordic hiking, on the route of the GTJ, Grande Traversée du Jura, through the Jura massif and its regional nature park: 175 km from refuges to inns, between mountain lakes and spruce trees, in the footsteps of the lynx, the capercaillie and... the most famous Jura skiers

In terms of classic and skating cross-country skiing, more than 1,500 linear kilometres of tracks are laid out in the Nordic areas of the Jura massif, which extends mainly over the department but also over its neighbours in the Doubs, the Ain and in Switzerland. The "Massif" ski pass is valid for all these areas. Finally, you can also consider more original activities, such as sled rides. There are several people who raise sled dogs in the Haut-Jura where the climate suits them perfectly. From a simple ride to a full week of discovery, including a lesson in driving a team, there are many activities on offer. You will discover the life of a pack, the different breeds of sled dogs, several types of harnesses and various techniques of moving with these dogs. Horse-drawn sleigh rides are also organised: farms and riding schools offer them. Some add to this offer a skijoring experience: you ski while being pulled by a horse. It is said that the sensations are similar to those of water skiing, but that it is much less difficult!

An original space between the zoo and the reserve, where you can meet the animals. The Val de Mouthe is called the little French Siberia. It is quite naturally there, in a former mountain pasture farm at an altitude of 1,200 metres, in the Risoux forest, that the Polar Park has taken up residence. It was more than 30 years ago, on the initiative of two sled dog enthusiasts, Claude and Gilles Malloire, who did not hesitate to give up city life and comfort to live for 14 years without electricity or running water, but with the animals, in the middle of nature. The pack, made up of Greenland dogs, has now reached 30 years of maturity and has found its balance. The visits last at least 1h30, they are all guided, in contact or in the immediate proximity of the animals. The guides are specialized animal caretakers who will take you into the living space of their protégés. You will discover the largest herd of western reindeer, Tarpan horses, aurochs and yaks. With your guides, you will enter the intimacy of the animal world. Spend some time inside the mini-farm with the barnyard animals, where an exhibition and a film complete this playful encounter. A hymn to man's best friends that is particularly successful!

A land of crafts

Nicknamed the "Land of Toys", the Jura has honoured this craft since the 14th century. Initiated by the monks of the Abbey of Saint-Claude, who turned objects for the pilgrims, the relay was taken over over time by the peasants of the Jura. Little by little, and mainly in the 19th century, rural spinning factories appeared, professionalising this craft: skittles, spinning tops, everyday objects and tools imitating those of adults, games and even musical instruments such as trumpets, whistles... After the Second World War, wooden toys were produced less and less, as the major manufacturers discovered plastic. But in recent years, there has been a return to the origins! The Vilac and Jeujura factories are the last French bastions of this now trendy object. You can admire and discover the history of these small objects at the Musée du Jouet in Moirans-en-Montagne.

Another wooden object, the pipe. This object is the symbol of Saint-Claude, a town which owes its fame to the quality of its pipes, made of briar wood. A museum is dedicated to the pipe and it is impossible to escape its giant version, a larger than life sculpture, built in front of the town's tourist office. Despite the tradition of wood turners, present since the Middle Ages, it was not until the discovery of briar wood that this craft really took root. Resistant to combustion and above all not spoiling the subtle perfumes of tobacco, briar wood is the ideal essence for the manufacture of the pipe. If, nowadays, the production of pipes has strongly decreased, going from 40 millions to only 450 000 pipes per year, the quality of the product has never been denied. And the museum of Saint-Claude is also the museum of the diamond. For the Jura has also distinguished itself in the embellishment of diamonds and other valuable stones since the 19th century.

In the Jura, the Laughing Cow is celebrating its 100th anniversary!

Laughing, playful, interactive, cheeky, synonymous with the gustatory pleasure linked to our childhood, the most famous of cows will be laughing for 100 years in 2021. It deserved a home to match its international reputation. Created in 2009 by Catherine Sauvin - granddaughter of Léon Bel - and Bernard Hanet, the Maison de La Vache qui rit is built on the site where it was born in 1921, in Lons-le-Saunier. Its 2,200square meters have become the reference point for the brand's memory. It also offers a unique look at one of the most impressive French industrial adventures. More than a museum, this place is also a reinterpretation of the brand's values, such as generosity, complicity and naturalness. From Jules Bel's first maturing workshop, the scenography goes back in time through the advertising and industrial history of the Bel group. The tour is enriched by the group's commitment to healthier and more responsible eating. This is a place where there is always something going on for young and old; always surprising through its cultural and artistic program. You will be even more dazzled this year with the additional animated exhibition that director Laurent Bourdereau and his team have set up. Remarkable ingenuity and creativity. There will also be highlights such as an ecological festival on 11 and 12 September in the park of the Lons thermal baths as well as a cyclosportive race sponsored by the champion Laurent Jalabert on 25 and 26 September.

When can you go? Of course, you can go to the Jura all year round to enjoy its heritage. To take advantage of the joys of winter, go from December to March.

How to get there. By plane (Dole-Jura, Lyon or Geneva airports), by train or by road, everything is possible 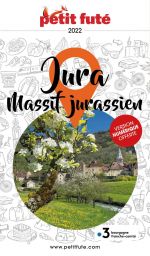 10 destinations to go with your children in France

This is a question that families are regularly asked: where to go on holiday in order to please everyone? Indeed, it is ...

Autumn is a perfect season for long outdoor walks. You can still enjoy mild temperatures and beautiful sunny days, and ...