When you think of the Morbihan, the Carnac Alignments, its wild coast and the islands of the Gulf of Morbihan. The Morbihan Guide will make you discover a plenitude of wonders on this coast of the Atlantic Ocean. Creeks, cliffs, sea bays, unusual fine sand beaches, marina, regional natural park, castles. So many enchanting landscapes which enchant the strolls of the inhabitants and visitors. It is the perfect destination for family holidays or excursions. If you want to laze around: think about thalassotherapy in the Morbihan, they will take great care to bring all the benefits of the sea to your body. You must not forget the richness of its land and its past (of which there are many legends) that men have known how to preserve at all times. The most popular places: Quiberon, the port of Crouesty, Billiers... Vannes, the ancient city of Morbihan has preserved an incredible charm which makes the city travel through history. The citadel of Port-Louis, the ramparts of Hennebont or the Fort Bloqué of Ploemeur... that millennia-old architecture that draws a land rich in its ancestors and proud of its battles! The submarine base of Keroman, now converted into a museum, remains a reflection of the military past of the city of Lorient. The Morbihan is the host of several cruises and campsites, its beauty is recognized by travel enthusiasts who come in particular to enjoy boating in the heart of nature, because there, it is the school of life. A maritime country par excellence, with more than 800 kilometres of coastline, rich in rivers, canals and numerous inland seas. The Morbihan, king of tourism in Brittany, offers a wide range of water activities such as kayaking, based on a network of professionals and enthusiasts.

What to see, what to do Morbihan? 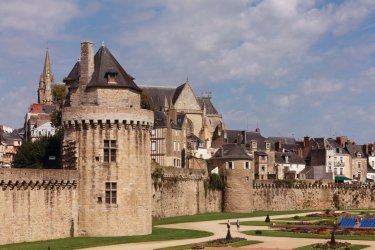 What to visit Morbihan ?

When to go Morbihan ?

When do we leave? With boots and oilskin, the Morbihan Greenways (964.3 km of cycle paths on 22 greenways) can be enjoyed all year round. From March (for the most courageous) to September, you can swim in the 148 bathing spots of this destination. In the summer, at low tide, you can put on your swimming shoes to tickle the crabs and shells. At high tide, you can swim in deliciously fresh water at a pleasant temperature. For the gourmets, you can enjoy seafood all year round: the "étrille", oysters, the bernique and the Breton mussel, but also the famous andouille from Guémené in Brittany!

Sporting escapade in Morbihan, between land and sea

Back to the origins of Morbihan

"Citadelle in celebration" in Port-Louis: an event to experience the site as it was in the 17th century

Which campsite to choose in Brittany ? Selection of 10 essential establishments

10 cities in France where to retire

Tropical Parc offers a breath of fresh air in the heart of Morbihan. The park invites you to discover on more than 4 hectares the biodiversity of ...

In Brittany, Tropical Parc is getting ready to launch its season with two ...

Morbihan is a dreamy place, with its Breton name, a promise of a preserved culture, a change of scenery, a fascinating discovery... And you will not be disappointed when you set foot in this small department nestled in the south of Brittany, rich with its countless islands and its endless coasts, its Celtic origins and its universe of legends... You will go from surprise to surprise, and will certainly not solve all the enigmas you will encounter, such as those of the menhirs of Carnac. To make it easier for you to decipher, we give you a thematic overview of this exceptional territory: its history, its nature, its culture... and an overview of the tastes, sounds, smells, landscapes and emotions that will punctuate your stay! Do you prefer to go inland, along the Nantes-Brest canal, for example, or to Brocéliande, or to the sea, with its beaches and hiking trails, among others?

Over 35 kilometers, this arc of circle covered with wild sand dunes received the label Grand Site de France in 2018. This impressive dune area of preserved nature is the largest in the northern half of the country, and is extended to the east by the Côte Sauvage of the Quiberon peninsula and to the west by the granite peninsula of Gâvres.

Inherited from peasant gatherings, the Fest-noz ("night party") emerged in the 1950s to keep the custom alive. People dance in a circle or follow along to local music, played on traditional instruments such as the biniou or the bagpipes. In 2012, the Fest-noz is listed as an intangible cultural heritage of humanity by UNESCO.

This term refers to a single oar installed at the back of a boat to ensure its speed and direction, but also to the navigation technique which depends on the strength of the sculler's propulsion and his ability to follow a trajectory. Every summer, the Groix World Sculling Championship is an event not to be missed!

If the legend says that the Gulf of Morbihan has as many islands as the year of days, there are actually about forty within the 115 square meters of this small inland sea, Arz and the Ile-aux-Moines being the largest. There are also the very popular Belle-Île-en-Mer, Groix, Houat and Hœdic, off the coast of the department.

It's the Breton "goodbye", chanted on street corners, hand raised! You can also hear some variations of this famous expression, such as "kenavo armiz all", literally "next month", "kenavo arwech all", a more common and natural "à la prochaine", or "kenavo emberr", for "à bientôt", quite simply.

From megas, "big" and lithos, "stone" in ancient Greek. Morbihan has more than 550 megalithic sites, the Carnac alignments being the most famous. Menhirs can be distinguished from dolmens (horizontal stones placed on verticals), cromlechs (in a circle), cairns (circular monument) or tumulus (eminence of earth and stones).

This sector accounts for more than 4,000 direct jobs and 500 companies in the area, which is thesecond largest oyster farming department in France and Lorient is the third largest fishing port in France. At sea, we fish for sea bass, gilthead bream, pollack, mackerel, etc. In the rivers and lakes, we find Atlantic salmon, trout, pike, zander, perch, etc

In the plural, of course, as there are no less than 162 of them in the area! From the white sand of Groix Island to the golden cliffs of the Mine d'Or beach or the pebbles of Beg Lann, from the infinite expanses of the Landrezac, Kerver or Quiberon beaches to the charming coves of Houat Island, how many will you discover?

Small fishermen's boat often built in the 60s, and which was used a lot by oyster farmers. It allows access to all the corners of the Gulf, and to navigate even on a depth of ten centimeters of water. An essential part of the family heritage of the Gulf of Morbihan, today, the flat boat is mainly used for leisure.

It is an important estuary, penetrated by the sea, often referred to as a "sea arm". The Ria d'Étel, or river for the locals, is known for its beauty by visitors, and for its dangerous sandy strip, creating formidable rollers, by sailors. In fact, in old French "ételle" meant "big wave".

It is a famous postcard that the image of this charming little house with blue shutters, alone on its islet of Nichtarguér (the "house of the oyster"). Built in 1894, it was the former residence of the oyster farm warden, located opposite the pretty village of Saint-Cado, also perched on an island linked to the mainland by a bridge.

When it's time to toast, you can't help it! As long as you know how to pronounce it correctly ("yé-red-mat", with a guttural "r"), this Breton "à la tienne" will ensure your complete integration for the rest of your stay! The expression literally means "good health", and is said with a glass of cider or chouchen in hand!

You still live here! You don't leave Morbihan, you settle there as soon as the time comes, maybe after a few trips... Because yes, the Bretons have a travelling soul, but when you are Morbihanese, what you prefer is still to go home!

You generously use the hashtag #BZH, a trio of letters that you love, which expresses all your pride in living in Brittany, and even more, in the most beautiful and sunniest department of the region, without a doubt!

You always have some semi-salted butter in the fridge, available for a slice of bread on a fresh baguette in case of hunger, and which you know how to incorporate nimbly into the recipe for creamy caramel passed down from generation to generation in your family!

You saved up as a teenager to buy your first... boat! As for your sea legs and your navigational skills with all the associated jargon, these are simply innate qualities that will never fail you!