Need to flee the city and disconnect from everyday life? The Pas-de-Calais is full of small green paradises to recharge your batteries in the countryside. Discover an authentic rural and natural heritage. Escape into the heart of green landscapes and let yourself be seduced by the local biodiversity. With 150 kilometres of coastline bordered by the sea, Nord-Pas-de-Calais is an ideal holiday and holiday destination! 3 territories, the Opal Coast, Marshes and Valleys and Around the Louvre-Lens. The largest beaches in France such as Escalles and Wissant, small picturesque fishing villages, attractive seaside resorts such as Berck or Wimereux, classified landscapes, preserved fauna and flora. The northern coast has all the assets to seduce you, the lovers of the sea. Arras is also an exceptional city thanks to its two magnificent squares of the Belfry and the Citadel, both listed as UNESCO World Heritage Sites! Finally, let us not forget Calais, the gateway to England, well known for its lace.

What to see, what to do Pas-De-Calais? 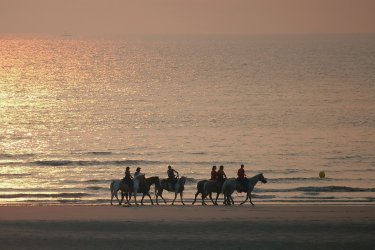 What to visit Pas-De-Calais ?

When to go Pas-De-Calais ?

When to go to Pas-de-Calais? Whether you are more interested in festivals, sales, carnivals, or sporting and cultural gatherings, the major festivals follow one another all year round on the regional agenda. Borrowing the famous cobblestones of Nord-Pas-de-Calais, Paris-Roubaix is one of the most beautiful bicycle races in the world. It is also a great popular festival that attracts spectators from all over the world every year in April, all along its route. Every 1st weekend in August, the crowd settles in Aulnoye-Aymeries and gives it the look of an intramural Woodstock version. The Secret Nights Festival has been part of the regional landscape for almost 15 years. So many events in the Pas-de-Calais!

2 or 3 days hiking around Wimereux

A few days of cycling on the Vélomaritime

A weekend in Boulogne-sur-Mer

Enjoy a pleasant motorcycle road trip in the region of Tourcoing

The department of Pas-de-Calais takes its name from the Pas de Calais, the strait that leads to England. It was created by a regrouping of Artois and a former part of Picardy which is located towards the coast. These two regions are therefore very different. You will appreciate Arras, its chief town, a former cloth-making city with its Place des Héros. A stop in Lens is essential for the Louvre museum. And don't miss the World War II museum, near Saint-Omer, housed in an impressive bunker. But the Pas-de-Calais is also the whole Opal Coast, with the unmissable seaside resorts such as the very chic Touquet-Paris plage, or Beck, a famous sand yacht spot, or the magnificent cliffs of the Griz-Nez and Blanc-Nez capes which attract more than two million visitors per year. Finally, a visit to Boulogne-sur-Mer, home to the largest aquarium in Europe, is a must. In short, there are so many things to discover!

The seal, an animal to observe from afar

Testimonies of the autonomy of the cities in front of the local lords, these big stone towers became a symbol of the North. If you are a lover of architecture, you will take great pleasure in admiring the many belfries located in the area, notably the magnificent belfry of Calais, that of Dunkirk and that of Gravelines

The most famous carnival on the Opal Coast is of course the one in Dunkirk! It has its roots in the festive evenings that marked the eve of the departure of the fishermen at sea. It takes place every year around Mardi Gras and lasts several months. Don't miss the herring toss and remember to learn the songs before you come!

The Deux Caps site has been labelled a Grand Site de France since 2011. It stretches from Boulogne-sur-Mer to Calais along 23 kilometres of coastline. Among the remarkable sites to see, the famous Cap Blanc-Nez and its white cliffs, as well as the Cap Gris-Nez named for its greyer coasts. It is a magnificent spot for bird watching.

GR as in sentier de Grande Randonnée. The GR120, also called Sentier du Littoral, allows you to walk along the coast from the Belgian coast to Berck-sur-Mer over 175 kilometres. Between dunes, cliffs, pine forests, fishing villages (Audresselles, Wissant...), the landscapes are exceptional and unique. Be careful, it goes up and down a lot!

Herring is as famous as it is celebrated on the Opal Coast! Traditionally launched at Carnival time, it is also particularly celebrated in November, the month during which it flees the Gulf Stream to arrive on our coasts and is then celebrated in many ports: Calais, Berck-sur-Mer and especially Étaples with the King Herring Festival.

If you see people "walking" in the water along the coast, don't be surprised! Created in the early 2000s, this activity consists of walking along the coastline with water up to your waist with or without a paddle. Today the craze is such that there are officially marked water walking trails

The tides give rhythm to the days on the Opal Coast, and change the landscapes as the days go by. Some sites appear totally different depending on whether the tide is high or low, such as the two capes. Each year, the high tides also attract many tourists who come to admire them, but be careful!

Also known as the miracle of Dunkirk, Operation Dynamo resulted in the evacuation of nearly 340,000 men. For several days, the battle raged on land and sea, allowing the evacuation of men while resisting the enemy's assaults. Today, this episode remains anchored in our history, inspiring books and films

It has become the star of the Bay of the Somme, but should be admired from a distance and preferably with binoculars. As cute as it is, the seal remains a wild animal, which you should not try to approach within 300 m (and even less to touch). At low tide, they can be seen basking on the sandbanks in various places.

Waterzoï or "boiling water" in Dutch! It is a Flemish recipe originating in Belgium, which was exported to the north of France and is part of our traditional dishes. This dish consists of a simmered soup based on fish or chicken, with vegetables, whose broth is linked to fresh cream and egg yolk.

You're not afraid to grab a French fry at the local"eul'baraqu'à frites", no matter if it looks like it's straight out of the 1990s. Besides, you know that "French fries are a party" and you often order a "mitraillette"!

You always have something for all weather conditions, from bright sunshine to "draught".

You know that when the sea fog (or "heat fog") is there, then it can stay for a few hours as well as a few days and you will have to deal with it.

For you, Belgium is more a charming neighbour with whom you like to party than an "other country". Besides, you may even have experienced the border crossing with customs at some places if you were born before the 1980s.