A land of contrasts, the English Channel is multiple, and it would take you weeks to fully explore this incredible diversity. Judge for yourself: cliffs, marshes, heavenly islands, small and large cities, steep hills, rivers and sandy beaches that stretch for several kilometres. The English Channel is all this at the same time: a geographical ensemble all in length, from Cherbourg to Mont-Saint-Michel, and which spreads its wonders everywhere. Natural of course, but also heritage: it is impossible to identify castles, manors, ancient mansions, churches and other remains. Wonders of memory also because here, the history is long, from William the Conqueror to the landing of June 6, 1944, which took place in part here, and which can be traced endlessly along the historic beaches or increasingly bold museographies. This destination is also a land of sport, the English Channel is a place for surfing, horse riding, cycling and a thousand other possibilities

What to see, what to do Manche? 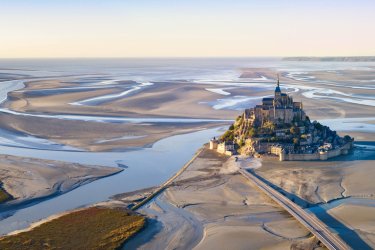 What to visit Manche ?

When to go Manche ?

When to leave? The Channel can be visited all year round with boots and a good raincoat because it rains five months out of twelve! In July and August, you can sail, surf, swim, hike or simply relax. April-June and September are often pleasant, it is the best time to go there. Walkers, sailors and riders will take advantage of these calmer months to enjoy nature. From October to March, it is generally quite bad, even if the temperatures remain mild

Open days at the National Agency for Radioactive Waste Management

The Utah-Beach Landing Museum and its heroes

If you are not yet familiar with the department, you will find here the essential elements to know the Manche well before coming to visit it. Because nothing beats seeing it "in real life". From nature to geography, history, architecture, fine arts, literature, gastronomy or sports, nothing will escape you! In this part of your guide, you will also discover many practical tips: What to bring back from these lands so rich in memories? Which events coincide with your stay here? Finally, we will show you original ways to discover the places you are about to visit, and we will propose a selection of the most breathtaking natural spaces: enough to confirm that the Channel is definitely unique! Enjoy reading and discovering as many places as this department is rich!

It is one of the symbols of the Manche, and even of Normandy as a whole. The bocage develops its palette of greens here: those of the trees, the meadows, the plants, conscientiously following the more or less folded geography of the place. The most numerous residents are the animals: the livestock are found in abundance.

If it is not the prefecture, the city is, by far, the largest. About fifteen kilometers long, along the sea, the city is dynamic, multiple, commercial, rich of an intense cultural life, and abounds in small lanes, parks and architectural beauties. The bad clichés are hard to believe: the city is a favorite

A little bit everywhere, you will see here stud farms or breedings. If Normandy is historically a land of horses, the Manche region plays a major role. Whether you are an experienced rider, an amateur or a novice, with or without children, you will find many opportunities to ride your horse in the department: memories guaranteed.

La Manche is a coastal department, but it is also very hilly - which may be surprising. In the north, the hills and cliffs impress when they end in the sea, like the Roule in Cherbourg. In the south-east, a landscape sometimes worthy of low mountains: hills, promontories, steep valleys or winding roads are frequent.

Museums, memorials, memorials and ceremonies regularly celebrate the liberation of 1944, which began - among other places - on Utah Beach on the east coast. While the fighting was intense (as evidenced by the many military cemeteries), the successful outcome opened the way to the rest of the country, and Western Europe.

I might as well say it straight away: here, we don't eat light! La Manche is Normandy, and Normandy is all about hearty dishes, fresh cream, butter and cheese! Thus sublimated, local dishes have a thousand flavors, and a thousand possibilities. In the Channel, fish and seafood are also honored: we love it!

Here, they are numerous. To the east, the uninhabited Saint-Marcouf. To the west, a host of rocks and islands, such as the Ecrehous or Chausey archipelago, about fifteen minutes from the mainland. And then, just opposite, the Channel Islands, so close and so far away: in a few minutes, you are in another country: passport please!

The heart of the department, over several hundred square kilometres, is the place of marshes. Fauna and flora are here in their territory, and the quietness of the place is not an empty word. If, in summer, you can navigate on the canals, in winter, the whole territory is covered with water, creating a real - and splendid - inland sea.

It is so well known that it is the emblem of the department. Majestic, splendid, mythical, mysterious: it's hard to find the words to describe "the wonder" - its nickname here. Of course, a first visit to the Manche cannot do without the Mount. Finally, we remind you for all practical purposes: it is well and truly located in the Channel..

They are numerous, and of all sizes: some are dozens of kilometers long, others take place in pretty little creeks sometimes difficult to access. With more than 350 kilometers of coastline, the Channel has many beaches: swimming, surfing, lazing around... are all summer possibilities!

Few people know this, and yet! The west coast of Cotentin has several surfing spots. Siouville-Hague or Le Rozel, for example, are renowned for the strength of the swell, and the possibilities that come with it. In addition to the locals, some national stars come to train here, and there are even dedicated schools for novices and experienced surfers.

You are not afraid of the rain: Cherbourg's umbrellas are the best in the world, rain is part of your daily life.

... but you remember that it doesn't rain here any more than anywhere else: the bad faith is not yours, it's your interlocutor's (of course!).

You often say "heula": this very frequent interjection is an exclamation that marks your surprise.

You get angry if someone attributes Mont-Saint-Michel to Brittany: no joking with the subject. "The Couesnon (the river separating Normandy and Brittany) in its madness put the Mont in Normandy": that is your argument!

You defend your department in all circumstances: there is no more magnificent one for you, and no territory is more beautiful in your eyes.

You speak of "sud-Manche" and of "nord-Cotentin" to evoke the geographical extremities of the department.