The Lot-et-Garonne, a concentrate of South-West France

The Lot-et-Garonne is marked by the meeting of two rivers, the Lot and the Garonne, which gave it its name. It was of little importance then to bring together different terroirs: the best of Quercy cohabits with a part of Périgord, a chouïa of the Landes, a tear of Gironde, a sigh of Gers, a sigh of Tarn-et-Garonne and a fraction of Lot . And all this was organised around a central and founding axis: the Garonne. A true invitation to travel, its wide bed flows languorously to draw varied landscapes on which an original heritage and a harmonious art of living have developed.

Agen is a superb introduction to discover the department. For the city has a rich history. Founded on the slopes of the Hermitage by the Nitiobriges in 400 BC, it has grown steadily since the Gallo-Roman period until the Hundred Years' War. Favoured by the capricious Garonne, Agen then developed a strong trade and places of worship of great historical interest, such as the Jacobins church, the oldest Gothic church in the South. During the Renaissance, Agen was bubbling with activity: you only have to look at the current Fine Arts Museum to get an idea of the wealth of the private mansions built at that time. Nowadays, one enters there by the magnificent Hôtel de Vaurs, where one is disturbed by the Venus du Mas, the famous Greco-Roman statue. The rest of the visit is an astonishing journey from prehistory to the present day, between an important collection of Roman antiquities and masterpieces by Goya, Rodin or Tintoretto

If the 16th century was rich for the city that welcomed Queen Margot, the Great Century was difficult, with its shortages, famines and other plague epidemics. Agen then specialized in the making of canvases, sails and draperies. The esplanade du Gravier, now walled up to protect itself from the floods of the Garonne, used to concentrate the markets on which dried plums were sold. These dried plums, which could be transported on board ships, were full of vitamins to prevent scurvy..

The prunes still make the city famous today. But beyond this image of Épinal, Agen is a cultural destination, a city of theatre. Whether it is the Théâtre du Jour and its amateur troupe or the municipal Ducournau stage, it is impossible to claim to have visited the city without having attended a small performance!

Then, after a beautiful walk in the natural park of Passeligne located at the gates of Agen, you will have to go to Moirax, for a discovery of Romanesque art. This former priory, founded in 1049, is one of the rare Clunisian sites in the department, along with the abbey of Saint-Maurin

We will then put down our suitcases in the Albret Country, this small Tuscany which lives around the city of Henry IV, Nerac. For a time, this town was home to the cream of the Renaissance intelligentsia. Of the castle of Henri IV, where the one who was not yet king resided from 1576 to 1588, only the north wing remains, alas: the others were destroyed during the French Revolution. But it is a magnificent example of Renaissance architecture. Today, it houses a museum that helps to better understand the lords of Albret and the kings of Navarre from whom the "Vert Galant" came. Afterwards, we will go for a stroll in the Royal Park of La Garenne and its three-thousand-step walk along the Baïse River. Returning gently to Nérac, we will take the Gothic bridge, witness of the life of the city in medieval times, before going into the charming alleys adjacent ...

The Pays Val de Garonne-Gascogne is home to the Mas d'Agenais, a charming bucolic town. You must visit the collegiate church of Saint-Vincent built on the ruins of an ancient Gallic temple. This Romanesque church is the setting for a magnificent painting by Rembrandt, "The Crucifixion". Moreover, the commune dominates the Garonne and the water sports centre is a haven of coolness in summer, when a house-boat is rented to sail on the canal. Finally, the village's beautiful market hall hosts a typical Thursday morning market

Then it is in the Lot valley country that one of the most beautiful castles of France can be seen. The fortress of Bonaguil, built on a rocky needle (the good needle... Bon aguil!) was supposed to control the borders between Quercy, Agenais and Périgord. The last great fortified castle built in France, it has never known any assaults. A marvel of military architecture, it presents a true catalogue of the fortification. A medieval escapade that will have to be completed by the discovery of the valley of Gavaudun. This protected natural site shelters, at the bend in the road, a splendid fortress. The entrance is phenomenal: it is a cave where narrow and steep steps have been built. It's not an easy visit... At the top of the dungeon, the view is superb. And the possibility of abseiling down along the dungeon offers an original way to discover an exceptional historical monument.

Finally, Le Pays du Dropt, marked by 800 years of history, shines thanks to Duras, its flagship city. Once again, you shouldn't miss its castle. From the 12th century castrum to the 18th century mansion, you will be carried away by the architecture of the place and by the eventful history of the lords of Duras. After centuries of conflict, the castle underwent profound architectural upheavals in the 17th and 18th centuries. It thus became a magnificent aristocratic villa with French gardens, very fashionable at the time. Partially destroyed and worn out by time, the castle has been restored and is a must-see in the region. After a walk on the terraces that border it, a climb up to the watchtower offers a breathtaking view that is conducive to daydreaming

The Pays Val de Garonne-Gascony is a godsend for gourmets. The territory is enamelled with small pink signs indicating the Fermes de Garonne, like a treasure hunt. On arrival, a little treasure of the land! Dozens of producers have committed themselves to a quality charter and offer products from their farms to share their passion for the agricultural world. The farms are very varied: from fruit and vegetables to wine, honey, cheese, vegetable oils, flowers, beef, duck or lamb meat and even snails... That's to say the variety of products that can be found during a tourist walk

Finally, everywhere in the department, you will have to taste one of the many local wines, between Côtes-de-Duras, Armagnac, Buzet, etc. Whatever the moment or time of the meal, it is a gourmet beverage that awaits our taste buds. They will accompany a rich and varied culinary heritage where duck and plum reign supreme. Strawberries and tomatoes are their valets, sometimes sweet, sometimes tart, but always colourful. Just like this exceptional territory.

When? You can go there all year round, but the arrival of fine weather is obviously more pleasant.

Get there. By car, bus or train to Agen.

Useful. To best prepare your escapade. 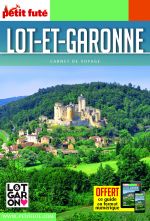 Discover the Ardèche by motorbike, the most beautiful roads

The Ardèche is a department that holds many surprises. A green, wild and mountainous territory, its nature is striking ...

The motorcycle road trip is a way of travelling that appeals to adventurous spirits and those who want to enjoy maximum ...